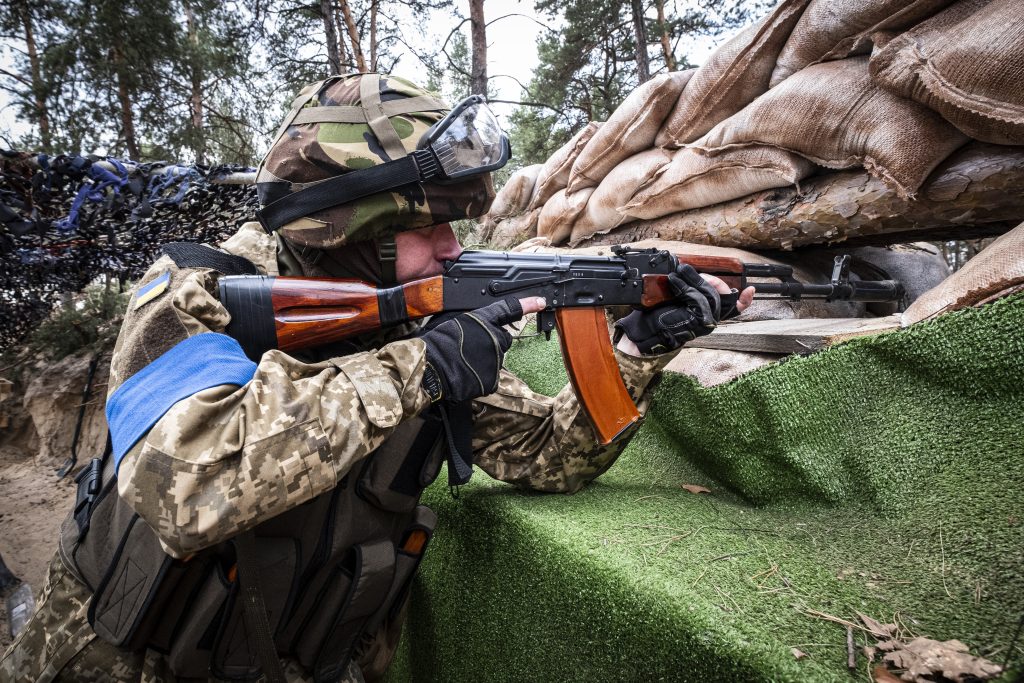 If Alyaksandr Lukashenka ever sends Belarusian troops to join Vladimir Putin’s war against Ukraine, there is a pretty good chance that they could end up fighting against other Belarusians.

That is because hundreds of Belarusian volunteers have already joined a paramilitary group in Ukraine called the Kastus Kalinouski Battalion, named after the nineteenth century Belarusian leader of an uprising against the Russian Empire. Hundreds more have expressed interest in joining and the group is using its Telegram channel to recruit fighters.

In a post on March 21, the group declared: “the voice of conscience called us to fight, because we could not be on the sidelines when fraternal Ukrainian people were being killed. Today the fate of our people is being forged in battles with the Moscow aggressor. With our blood we lay the foundation for freedom and the revival of our Motherland, a successful Belarusian breakthrough in the future.”

On March 26, the group posted a video of its members taking an oath to become part of the Ukrainian Armed Forces. It has also posted videos showing seized and burned out Russian tanks. “Here is captured equipment and there is destroyed equipment. There are a lot of trophies,” a fighter says on the video.

The participation of Belarusian volunteers fighting against the Russian invasion of Ukraine illustrates that the stakes of Vladimir Putin’s war extend far beyond the current battlefield. Ukraine’s David-and-Goliath struggle to defend its sovereignty and independence has become an inspiration for many in the former Soviet Union who seek to resist Russian imperialism and autocracy in favor of Western-style liberal democracy.

Just as the 1936-39 Spanish Civil War became a battleground for the competing ideologies in Europe in the early twentieth century, Russia’s war on Ukraine has become a proxy, a metaphor, and a lightning rod for the political struggles of the former Soviet space. And nowhere is this truer than in Belarus.

“If Ukraine should fail, and I hope that will not happen, Lukashenka’s line to the Kremlin will feel much stronger and our fight will be very difficult. But when Ukraine wins it will be much easier for people in Belarus to realize that we can change a lot in our country and we will have this window of opportunity,” Belarusian opposition leader Sviatlana Tsikhanouskaya recently told The Independent.

Likewise, Sergei Bespalov, a former dissident journalist from Minsk who went into exile in Kyiv and joined the Kalinouski Battalion, told The New York Times: “We have a common enemy, Putin and Lukashenka. These are the two people who unleashed this war. If Kyiv falls, it will be bad for everyone, including Belarus.”

Put simply, it is not only the fate of Ukraine hanging in the balance of Putin’s war, it is also the fate of Belarus.

If Putin’s campaign to subjugate Ukraine fails, it will severely undermine his reputation in the region. Defeat in Ukraine would blunt the attractiveness of Russia’s autocratic model while emboldening liberal and democratic forces. It may also weaken Putin’s standing at home, as Russia has historically not been kind to leaders who lose wars.

“Kyiv is being bombed and we realized this is probably the only such chance, the last chance, to win back Belarus, protect Ukraine, and actually make this world a better place,” Konstantin Suschik, a Belarusian graphic designer who joined the fight in Ukraine, told The New York TImes.

Belarusians are not the only citizens of former Soviet states to join Ukraine’s fight against Russian aggression. Hundreds of volunteers from Georgia, which itself was invaded by Russia in August 2008, are also fighting in Ukraine. The Georgia Foreign Legion, commanded by Mamuka Mamulashvili, has recruited soldiers from dozens of countries including his native Georgia. “I need only one motivation, to save people and save civilians,” Mamulashvili told Politico.

The volunteers from Belarus and Georgia are fighting for Ukraine in defiance of their own governments.

Wary of antagonizing Moscow, the Georgian government, despite claiming to be pro-Western, has been hesitant to provide support to Ukraine and has not joined Western sanctions against Russia. On February 28, the Georgian authorities prevented a charter flight from landing in Tbilisi that was set to take volunteers to Ukraine. The Georgian volunteers were then forced to take a bus, delaying their arrival by several days and prompting Mamulashvili to call his government “slaves of Putin.”

In Belarus, where the Lukashenka regime is actively supporting and enabling Putin’s war, volunteer fighters face arrest should they be caught trying to join the fight on Ukraine’s side.

Putin launched his war in Ukraine on the false pretense of protecting Russian speakers and ethnic Russians. In reality, at its most basic level, the war is about Ukraine preserving its sovereignty, independence, and resistance to imperial expansion. But at another level, it is a struggle between those who support democracy across the former Soviet space and those who oppose it.

Image: Advanced positions of infantry and artillery units on the outskirts of Kyiv. March 29 2022 (Photo by Joseph Galanakis/NurPhoto)