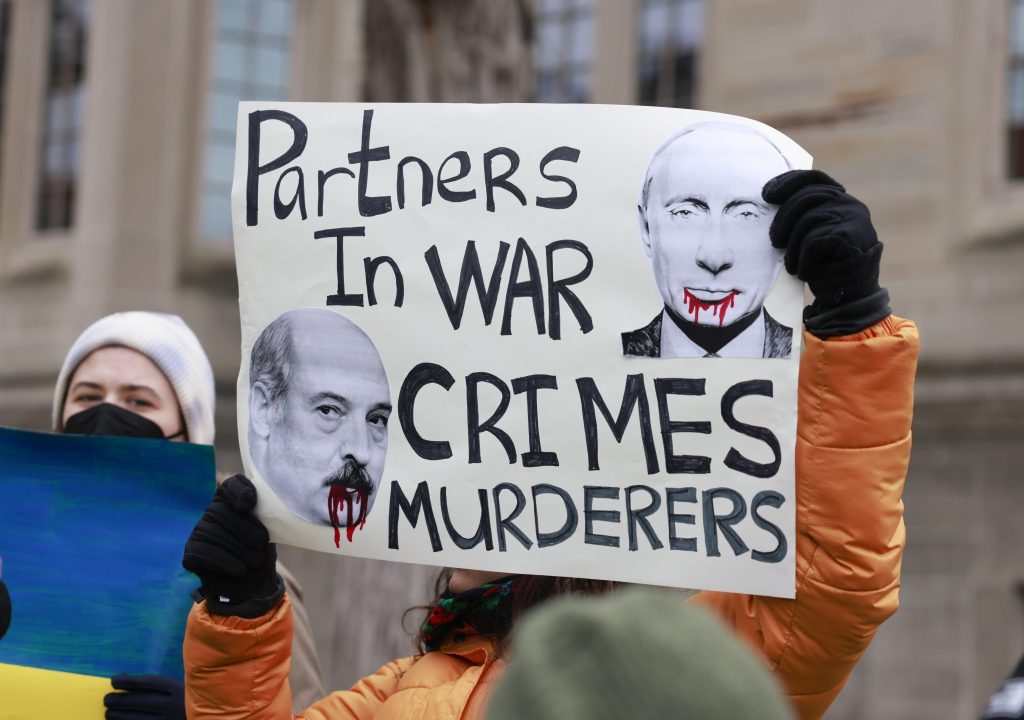 With the Russian invasion of Ukraine now in its second month, there are growing indications that Belarusians are deeply opposed to their country’s involvement in the conflict. Belarusian dictator Alyaksandr Lukashenka has allowed Vladimir Putin to use Belarus as a platform for Russia’s offensive against Ukraine and as a launch pad for air raids and missile strikes on Ukrainian targets. This has sparked widespread unease and led to warnings from the country’s exiled opposition that Belarus is now effectively under Russian occupation.

Any attempts to gauge public opinion in authoritarian Belarus are challenging, but the available data is consistent and indicates that Belarusians resoundingly reject any role in the Russian invasion of Ukraine. According to a recent Chatham House poll, less than 3% of Belarusians favor offering military assistance to Russia, while around two-thirds (67%) object to Russian forces bombarding Ukraine from Belarusian territory.

Meanwhile, a National Poll surveying opponents of the Lukashenka regime found that 91% viewed military support for Russia against Ukraine as catastrophic for Belarus, while half feared that the war would encourage Ukrainians to view Belarusians as enemies. This transformation in perceptions between formerly friendly Ukrainians and Belarusians is already becoming evident. Recent data from Ukraine indicates the 84% of Ukrainians now perceive Belarus as a hostile country.

If opposition to Belarusian involvement in Putin’s war is so strong, why are mass protests not taking place in the country? This is largely due to the oppressive apparatus long established by the Lukashenka regime and considerably enhanced during the crackdown on protests that followed the rigged August 2020 Belarusian presidential vote.

In the wake of the nationwide opposition movement that erupted across Belarus in late summer 2020, the Lukashenka regime introduced a range of draconian measures to prevent protests from gaining ground. Today, 1,101 Belarusians are recognized as political prisoners, while over 45,000 have been detained and given fines or short prison terms. Many detainees have reported instances of torture and other grave human rights abuses. Members of the political opposition have been forced to flee the country, while independent media outlets and civil society organizations have been shut down.

Despite these challenging circumstances, Belarusians are still finding ways to express their discontent. Many used a late February referendum on constitutional changes to protest against the Lukashenka regime by spoiling ballot papers in line with a strategy proposed by the country’s pro-democracy opposition. Others took advantage of this rare opportunity for public gatherings to voice their disquiet over the war in Ukraine.

The Belarusian diaspora has also mobilized since the outbreak of hostilities on February 24 in support of Ukraine’s refugee community. With millions of Ukrainians forced to flee the war, Belarusians in a host of countries have created tailored IT services providing help with accommodation and free legal support.

Some Belarusians have already made their way to Ukraine and joined a Belarusian regiment fighting alongside Ukraine’s armed forces. This unit currently numbers several hundred and has received significant media coverage. More recruits are expected.

There is growing evidence of resistance within Belarus itself. Reports continue to emerge of attacks on Russian military equipment close to the Ukrainian border. There have also been significant efforts to sabotage the Belarusian railway network and prevent Russian troops from being transported to the border with Ukraine. This sabotage campaign has been attributed to Belarusian railway workers, hackers from the Cyber-Partisan community, and ordinary Belarusians who oppose the war.

In an effort to further distance the country from the actions of the Lukashenka regime, members of the Belarusian opposition in exile have asked for Belarus to be recognized as being under Russian occupation. “I call on the international community to acknowledge that Belarus is under de-facto occupation and demand that Russia withdraw its forces,” Belarusian opposition leader Sviatlana Tsikhanouskaya recently stated. “We need to stop this shameful participation in Russian aggression against Ukraine that threatens the whole of Europe.”

Tsikhanouskaya’s appeal is unlikely to be successful. While Lukashenka has suffered a dramatic loss of legitimacy as a result of his reliance on the Kremlin, he remains the official head of state and as such has the authority under international law to invite the Russian military into the country.

This means Belarus is likely to face future international accountability for its role in the Russian invasion. Belarusians have shown very little enthusiasm for any involvement in Putin’s imperial crusade and have demonstrated their opposition in a number of ways. Nevertheless, the country will struggle to shift the stigma of its role as a key supporter in a war that has outraged global opinion.