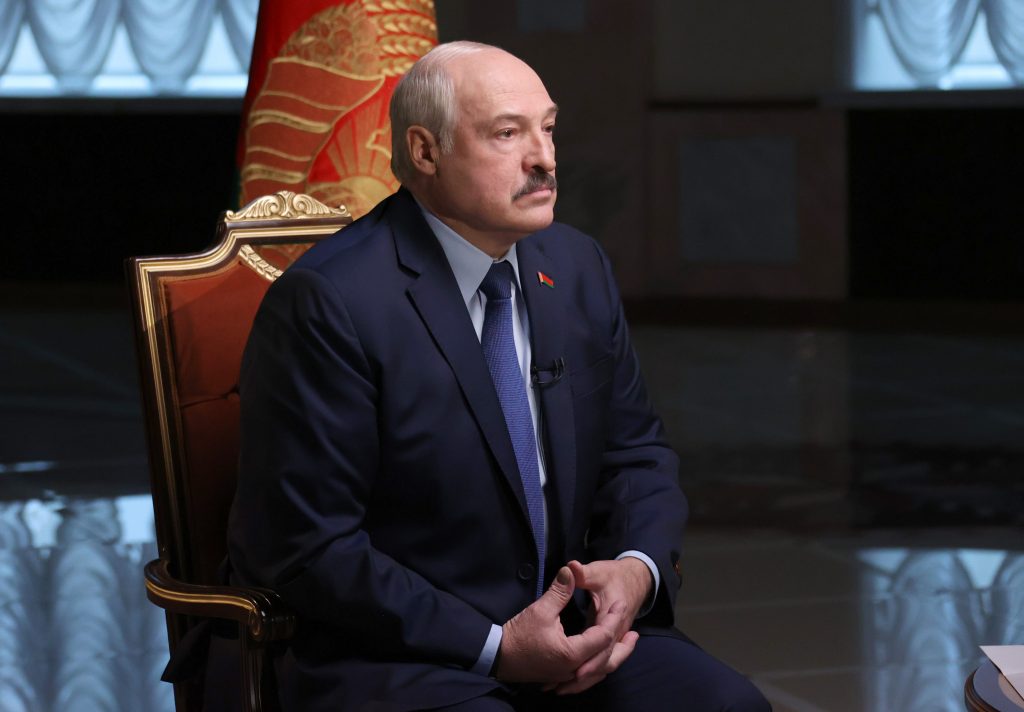 Alyaksandr Lukashenka’s manufactured crisis on the Belarusian border with the European Union achieved one key result the illegitimate dictator in Minsk has long been seeking: a degree of international recognition.

Outgoing German Chancellor Angela Merkel’s two phone calls with Lukashenka were an effort to ease the crisis. But they drew a harsh rebuke from the exiled Belarusian opposition leader Svyatlana Tsikhanouskaya.

Speaking at a conference in Vienna on November 22, Tsikhanouskaya said the calls “looked very strange” from the perspective of the Belarusian people and urged EU leaders to “refrain from any contacts” with Lukashenka, who was seeking international legitimacy through diplomatic dialog.

Lukashenka also used the call to attempt to blackmail Germany into taking in 2,000 of the migrants that Belarus had flown from the Middle East to Minsk and bused to the country’s borders with Latvia, Lithuania, and Poland, sparking a months-long crisis.

While one crisis on a border in Eastern Europe appeared to ease, another quickly took its place. While Lukashenka was removing migrants from his western frontier, Russia was intensifying a military buildup on its nearby border with Ukraine.

As Russia massed troops and moved ballistic missile systems towards the Ukrainian border, Kremlin leader and Lukashenka patron Vladimir Putin accused the United States and its NATO allies of “aggravating the situation by supplying Kyiv with modern lethal weapons” in a bellicose speech at the Russian Foreign Ministry on November 18. Putin vowed that Moscow would “adequately” respond, sparking fears of a possible new Russian offensive in Ukraine.

Putin also claimed, without any confirmation from Washington, that a second summit between Putin and US President Joe Biden was in the works.

Putin said Russia would use the purported summit with Biden to push for “serious long-term guarantees that ensure Russia’s security” in the region. Days later, on November 21, Russian Deputy Foreign Minister Sergei Ryabkov described the importance of the still unconfirmed meeting between the Russian and American leaders as “huge.”

The mounting crisis on the Russian-Ukrainian border has a strong sense of deja vu about it. We went through all this before, when a menacing Russian troop buildup on Ukraine’s border in April 2021 was followed by a Putin-Biden summit in Geneva in June.

Does anybody notice a pattern here? It goes something like this: a dictator orchestrates a manufactured crisis; said dictator then pushes for dialog to resolve the crisis; the ensuing dialog is then leveraged to extract concessions.

It’s the exact same script whether we are talking about the dictator in Minsk or the autocrat in the Kremlin. Whether or not Putin and Lukashenka are acting in concert, and it certainly appears that they are, the underlying strategy is the same: first you play arsonist, then you play firefighter.

In a further indication that the twin border crises are related, Ukraine has announced plans to build a barbed-wire fence along its 2,500 kilometer border with Belarus and Russia and to deploy an additional 8,500 troops there.

Ukraine is also consulting with Poland and Lithuania to defend against any potential threats from Minsk. Given the rapid expansion of Russia’s military footprint in Belarus and Lukashenka’s recent bellicose rhetoric against Ukraine, that threat is far from theoretical.

Despite Merkel’s legitimizing phone calls with Lukashenka, she and other European leaders resisted giving in to his extortion attempts. Germany rejected Lukashenka’s proposal to accept 2,000 migrants, calling it “not a solution that is acceptable.”

Likewise, Austrian Chancellor Alexander Schallenberg said the EU “must not give in to blackmail from Lukashenka,” adding, “we have to respond united and very clearly to this state-sponsored hybrid attack on the European Union.”

The United States should also resist Vladimir Putin’s efforts to leverage a crisis entirely of his own making in order to gain a summit with President Biden and to use that meeting to extract concessions from Washington.

The Putin-Lukashenka axis of autocrats is engaging in repeated and brazen acts of geopolitical extortion. Rewarding this with phone calls, summits, and concessions will only encourage the dictator in Minsk and his patron in Moscow to continue this dangerous behavior.

Belarus dictator Alyaksandr Lukashenka’s manufactured migrant crisis on the EU border is entirely in step with the hybrid war against the Western world being waged by his sole international patron, Vladimir Putin.