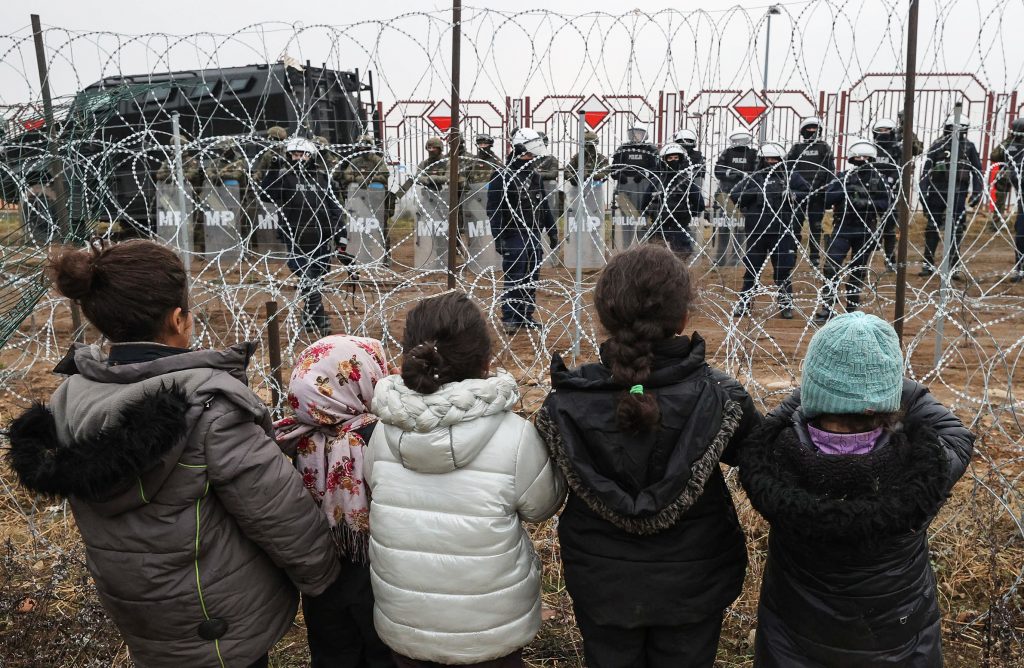 Vladimir Putin has decided to pour gasoline on the fire.

As Alyaksandr Lukashenka’s manufactured migrant crisis on Europe’s eastern frontier continued to escalate, Russia began flying nuclear-capable bombers over Belarus as a demonstration of support for its client in Minsk. And in case anybody failed to get the message, Moscow also launched joint military exercises with Belarus near the Polish border.

These do not appear to be the actions of a man that would like to see the mushrooming crisis on the European Union’s border with Belarus deescalate, as some media reports have suggested. And with Moscow also building up its military forces on its border with Ukraine, there is growing alarm in Western capitals that Putin might also be preparing a fresh offensive there.

These disturbing developments come as the EU and the United States prepare a fresh round of sanctions against Belarus. Additionally, Belarus’s three western neighbors Latvia, Lithuania, and Poland are considering invoking NATO’s Article 4, which calls for consultation when “the territorial integrity, political independence, or security of any of the parties is threatened,” in response to the current border crisis.

Recent developments like Russia’s bomber overflights, joint military exercises, and Russian Foreign Minister Sergei Lavrov’s suggestion that Europe pay off Lukashenka to end the crisis have sparked a debate over whether Moscow is the true mastermind behind the crisis.

Barring some form of smoking gun that is unlikely to materialize, it is virtually impossible to confirm if this is true. But whether Putin is the ultimate architect of the crisis is also irrelevant.

As Lukashenka’s sole international patron, Putin has facilitated the conditions that have allowed the tense situation on the EU border to escalate, and is therefore responsible. And by doubling down on Lukashenka with a recent show of military support, the Kremlin is now actively contributing to a further dangerous escalation of the crisis.

As I have written in this space, for the past year Lukashenka has been playing a similar role internationally for Putin to the role played at home by Chechen strongman Ramzan Kadyrov, who is widely believed to have been behind the assassinations of Putin critics like Russian opposition leader Boris Nemtsov and investigative journalist Anna Politkovskaya. By allegedly acting as Putin’s willing executioner, Kadyrov provides the Kremlin leader with plausible deniability and distance from operations he wants carried out without his fingerprints.

Lukashenka now appears to be playing a similar role in the Kremlin’s confrontation with the West. If Kadyrov is Putin’s willing executioner, Lukashenka is his willing instigator and provocateur. At the same time, Putin is acting as Lukashenka’s willing enabler.

To understand the Kremlin’s role in this crisis, one needs only ask the age-old Russian question: komu vygodno, or who benefits?

Lukashenka does have more agency that he is often given credit for. His actions, like the recent threats to cut off Russian gas supplies to Europe, can be a headache for the Kremlin. Nevertheless, the Putin regime is still clearly benefiting from Lukashenka’s bellicose behavior toward Europe.

Most importantly, the more Lukashenka misbehaves and the more isolated he becomes, and the more dependent he is on Moscow’s support. This advances the Kremlin’s political goal of turning Belarus into an increasingly pliant and obedient client, along with its strategic goal of turning the country into a de facto extension of Russia’s Western Military District.

The Putin regime is not seeking to outright annex Belarus in a shock-and-awe Crimea-style operation. Instead, it is meticulously carrying out a soft, stealthy, and surreptitious annexation, steadily expanding its political, economic, and military footprint until Kremlin control is a fait accompli.

Additionally, Lukashenka’s provocative actions dovetail with, mimic, and provide a force multiplier for Putin’s broader political war with the West. They also add to the atmosphere of impunity and disregard for international rules and norms that Putin has long pursued. In fact, the Belarusian dictator’s current manufactured migrant crisis imitates tactics Russia has been accused of using against Europe in the past.

And finally, Lukashenka’s antics provide a window of opportunity for Putin to adopt his preferred pose as both arsonist and firefighter.

As the Minsk-based Center for Strategic and Foreign Policy Studies wrote in a recent confidential and unpublished report: “The Russian side is benefiting from the current escalation of the crisis by acting as the only potential “solver” of the Belarus issue. In this context, Putin’s statements about Russia’s non-involvement in the crisis and Belarusian sovereignty sound like a hint of the need to officially “invite” Moscow to exert influence on Minsk.”

Imperial powers are not complete puppet masters and client states always have some degree of agency. But Putin and his inner circle understand Lukashenka’s psychology well and know how to push his buttons to get the desired result. In this sense, the autocrat in the Kremlin bears as much responsibility for the current crisis as the dictator in Minsk. Western policymakers need to bear this in mind when formulating their response.