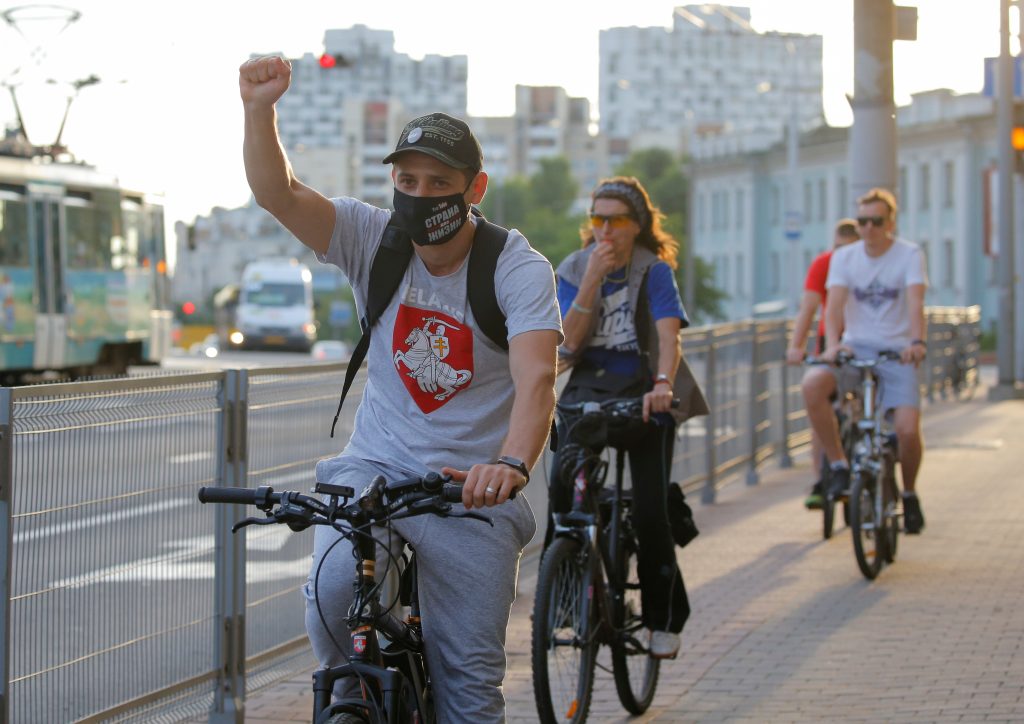 This summer’s presidential election in Belarus promises to be the most remarkable the country has witnessed in over a quarter of a century. Ever since he first won the presidency in 1994, Alexander Lukashenko has ruled the small but strategically important former Soviet republic with an iron fist. This has earned him the moniker of Europe’s Last Dictator and also left his fiefdom largely isolated from the rest of the continent. However, ahead of the August 9 vote, the political monotony that has characterized Lukashenko’s rule for more than two decades has been shattered by a sudden outbreak of democracy.

The current race for the Belarusian presidency is unusual in many ways. Unlike previous votes where the result was predetermined by Lukashenko’s total dominance over the country, this ballot is shaping up to be a genuinely competitive affair. Blogger Sergei Tikhanouski was the first opposition candidate to catch the public imagination with his use of slippers as campaign props targeting the “cockroach” Lukashenko. Next came former banker Viktor Babariko, whose prior role as head of Belgazprombank, the local affiliate of Russia’s Gazprombank, lent his candidacy considerable gravitas while fueling suggestions of Kremlin ties. They have had little trouble gathering the 100,000 signatures required to register as candidates, with Belarusians lining up in towns and cities throughout the country in recent months to offer their support.

Both Tikhanouski and Babariko have since been arrested as part of a widespread crackdown launched by Lukashenko. However, they still aim to run for the presidency, with Tikhanouski’s wife set to officially represent the imprisoned activist on the ballot and Babariko ready to participate from behind bars if necessary. Babariko is considered the more serious candidate of the two as he represents the Belarus establishment, making him potentially more palatable to the notoriously conservative Belarus electorate.

It is extremely difficult to gauge how popular either Tikhanouski or Babariko really are due to the absence of independent opinion polls, which are banned in Belarus. Even online surveys have recently been outlawed after a series of internet polls placed Lukashenko in a distant fourth place with just 3% support. These same digital polls suggested that around half of Belarusian voters backed Babariko. While unscientific surveys of this nature should not be taken too seriously, the 3% figure quickly became a popular meme among regime opponents. This clearly rattled Lukashenko, who responded by calling on anti-government activists to stop referencing it.

The government clampdown has yet to quell the growing protest mood in the country. On the contrary, public anger appears to be growing and has spread internationally, with a number of solidarity rallies recently staged in European capitals. Activists are finding different ways to express their opposition to Lukashenko’s endless rule, with some adopting the slippers of Tikhanouski’s campaign and others using social media or sporting T-shirts mocking the long-serving Belarusian head of state. When police swooped to detain shoppers at a Minsk store sell anti-regime branded clothing in late June, hundreds turned up at the shop on the following day in an act of solidarity and calculated defiance.

After 26 years in power, why does Lukashenko suddenly find himself in such apparent peril? The short answer is that younger Belarusians are simply tired of his neo-Soviet brand of stability. There are also a number of more specific factors behind the recent rise in political activism. In late 2019, Belarus came under mounting pressure from Moscow to deepen the country’s integration with Russia. As part of efforts to resist Russia’s unwelcome embrace, Lukashenko took the highly unusual step of allowing a series of mass rallies to take place in Minsk. This unprecedented political freedom appears to have whetted appetites for further mobilization.

More recently, Lukashenko’s clumsy handling of the coronavirus crisis has caused local outrage. The Belarusian ruler refused to introduce lockdown regulations, preferring instead to ridicule the preventative measures adopted elsewhere as a form of “psychosis”, while advising the public to ward off the pandemic by drinking vodka, visiting saunas, and engaging in tractor rides. Unsurprisingly, this buffoonery has not stopped the spread of the virus, with over 60,000 cases officially registered and more than 400 deaths so far. Many suspect the real figures are far higher. The country’s escalating healthcare crisis and accompanying economic downturn have struck a blow at the heart of Lukashenko’s unwritten social contract with the Belarusian public, which promised economic and social stability in exchange for continued acceptance of the non-democratic status quo.

Faced with mounting domestic opposition, Lukashenko has accused both Russia and Poland of seeking to meddle in the upcoming election. The allegations against Moscow are particularly explosive, given his chief rival Babariko’s Gazprom ties and Russia’s open intention of drawing Belarus closer to the Kremlin. Nevertheless, Lukashenko’s attempts to blame protests on outside agitation are unlikely to resonate among younger Belarusians who want change and are generally less inclined to embrace the insular xenophobia of the Soviet era.

Is Belarus’ strongman at his weakest?

On August 9, Belarus will hold its presidential election. The government’s inept response to the coronavirus pandemic has made President Lukashenka vulnerable. Do any of the opposition candidates have a chance?

As the election campaign unfolds over the coming month, there is a real danger that the situation could escalate dramatically. Lukashenko simply has too much to lose. At stake is not only his political career, but his personal freedom. The Belarusian leader will be all too aware of the potential fate awaiting him if he is voted out of office or forced out by a Maidan-style people power uprising similar to Ukraine’s 2004 and 2014 revolutions. Unlike ousted Ukrainian president Viktor Yanukovych, Lukashenko would be unlikely to receive a warm welcome and a comfortable exile in Russia. Europe would be closed to him for even more obvious reasons. Instead, he can be expected to cling on to power for as long as possible, and will deploy the full force of his considerable security apparatus if necessary.

The presidential election in Belarus will be keenly followed throughout the region. For Ukrainians, the volatile buildup to the vote offers striking echoes of their country’s own pro-democracy breakthroughs of the past two decades. While the emergence of a democratic Belarus remains unlikely, such an outcome would transform the geopolitical balance of power in Ukraine’s favor and represent a huge blow to Putin’s revisionist agenda.

A far more realistic scenario would see Russia capitalizing on mounting instability in Belarus to extend its influence. In 2014, Moscow exploited Ukraine’s post-revolutionary vulnerability in order to seize Crimea and unleash a war in the east of the country. Given the extent of Kremlin infiltration in the Belarusian military and security services, some form of hybrid attack against the country cannot be ruled out if deteriorating circumstances during the coming weeks present Moscow with a window of opportunity.

It is too soon to speak of an impending Minsk Maidan, but Belarus looks set for a summer of political discontent that could have serious ramifications for the surrounding neighborhood. In order to survive, Lukashenko may have to resort to measures so drastic that he will burn his bridges with the democratic West. Meanwhile, he must also contend with his frenemies in Moscow who make little secret of their desire to absorb his nation. Belarus has been an international backwater for much of the past 25 years, but it may soon find itself thrust into the very center of geopolitical spotlight.