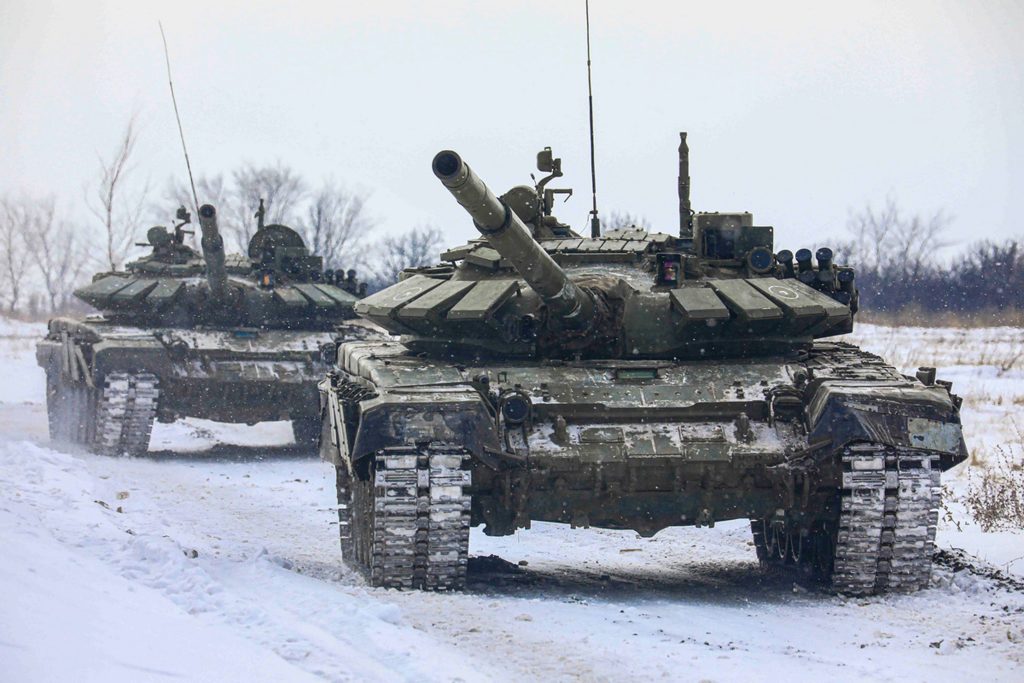 Amid the largest Russian military deployment to Belarus since the Cold War, which includes Iskander tactical missiles, S-400 anti-aircraft missile systems, and SU-35 fighter jets, the autocratic Belarusian ruler said he would meet with Kremlin leader Vladimir Putin this week to decide “when, on what terms, and on what schedule” the troops will leave. “It will be our decision. This is our territory,” he added.

The Russian deployment to Belarus is ostensibly for military exercises that are scheduled to run until February 20. But they are being deployed menacingly close the Belarusian-Ukrainian border at a time when Russia continues to concentrate more than 100,000 troops near its own border with Ukraine and in the annexed Crimean peninsula. Meanwhile, the Russian Navy is conducting live fire exercises in the Black Sea near Ukraine’s coast.

In an interview with Foreign Policy, Polish Foreign Minister Zbigniew Rau said the nature of the deployment to Belarus suggests the Russian troops may never leave. “The military build-up in Belarus seems to be something more permanent, unfortunately, and it’s a great concern of ours,” he said.

The most immediate concern about Moscow’s troop deployment to Belarus is, of course, the prospect of them being used as part of a full-scale Russian invasion of Ukraine. In addition to increasing the Russian military encirclement of Ukraine, the presence of these troops also means an invasion force striking from Belarus could reach Kyiv in roughly two hours.

But the long-term ramifications of Putin’s militarization of Belarus are equally disturbing and represent the most significant change in the security calculus in Eastern Europe since the end of the Cold War. This would be the case even if Putin had not chosen to instigate and manufacture a crisis with Ukraine.

“Belarusian territory is simply a staging area for the Russian army, and the extent of the threat from Belarus is determined by one factor alone: how keen the Kremlin is to go to war,” Belarusian political analyst Artyom Shraibman wrote in a commentary for the Moscow Carnegie Center.

Unsurprisingly, the countries on NATO’s eastern flank that border Russia and Belarus are now raising the alarm.

The Baltic states in particular are concerned that a permanent Russian troop presence in Belarus would enhance Moscow’s ability to seal the Suwalki Gap, a 60-mile stretch of flat land along the Polish-Lithuanian border between Belarus and the western Russian exclave of Kaliningrad.

If Russia were able to seize and seal this strategic piece of European land, Estonia, Latvia, and Lithuania would find themselves cut off from the rest of NATO. The three Baltic nations would be unable to receive reinforcements by land and would be vulnerable to aggression from Moscow.

In remarks to the Washington Post, permanent secretary of the Estonian Ministry of Defense Kusti Salm put it bluntly: “Now we are a peninsula. We would become an island.”

Likewise, speaking to Foreign Policy, Kristjan Mae, the head of the NATO and European Union Department in Estonia’s Defense Ministry called the Russian build-up in Belarus “a game-changer,” adding that in the past “Belarus had always resisted having Russian troops permanently stationed” in the country. “What we are seeing at this very moment are strategic capabilities, on top of conventional troops, that will change the calculation in favor of Russia even further,” Mae said.

Lithuania and Poland, both of which border Belarus to the West, are calling on the United States and NATO to deploy more troops and military hardware to the alliance’s vulnerable eastern members.

After meeting with UK Prime Minister Boris Johnson, Lithuanian Prime Minister Ingrida Simonyte said her country needs “an increased NATO partner presence in Lithuania.” Likewise, Polish Foreign Minister Rau reportedly told US Secretary of State Anthony Blinken that deterrence needs to be increased. “More Atlantic alliance troops are needed in the face of a potential threat growing on the other side of our border,” Rau stated.

Roughly 12,000 NATO and US troops are currently stationed in the Baltics, Poland, and Romania on a rotational basis. On January 24, US President Joe Biden placed 8,500 US troops on “high alert” to deploy to Eastern Europe if necessary. And on February 2, the Pentagon deployed 2,000 troops to Europe, mostly to Poland, and moved an additional 1,000 troops from Germany to Romania.

These moves are all welcome. But given how dramatically Russia’s militarization of Belarus is changing the security equation for NATO’s front line states, recent steps are probably insufficient. The United States and NATO should consider giving the Baltics and Poland what they have been requesting for years: permanent US and NATO bases.

At the moment all eyes are understandably on Russian saber-rattling along Ukrainian border. But regardless of how Putin’s manufactured crisis in Ukraine ends, the threat to NATO’s eastern flank will remain.