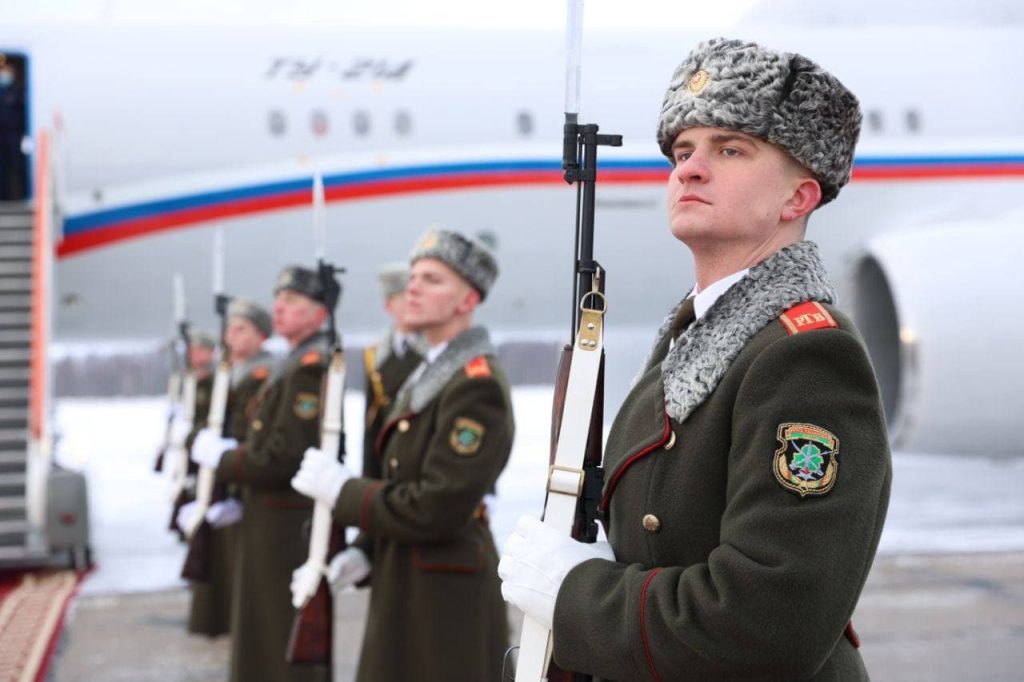 With tens of thousands of Russian troops currently deployed in Belarus, fears are mounting that the country could serve as a springboard for Vladimir Putin’s threatened full-scale invasion of Ukraine. While the Russian forces currently in Belarus are ostensibly engaged in routine joint military exercises, their presence underlines Russia’s growing dominance over a country that had previously been noted for its ability to walk the geopolitical tightrope between Moscow and the West.

The Russian takeover of Belarus has been underway for the past eighteen months. It owes much to Belarus dictator Alyaksandr Lukashenka’s international isolation following his ruthless crackdown against a wave of pro-democracy protests which erupted following the rigged August 2020 Belarusian presidential election.

Moscow has skillfully exploited Lukashenka’s pariah status, doing just enough to prop up his regime while pressuring the wily dictator to publicly align himself with Putin’s anti-Western crusade. In parallel, Russia has been slowly but surely increasing its military presence inside Belarus through the staging on open-ended joint exercises and the establishment of new training facilities.

The success of Russia’s strategy in Belarus has led to talk of a “soft annexation.” It is not difficult to see why. Today’s Belarus is now effectively an extension of Russia’s western military district and a dependable ally in the ongoing Kremlin campaigns against Ukraine and the wider Western world.

Meanwhile, Lukashenka has lost all legitimacy and is entirely dependent on Russian favor. He has no choice but to do Moscow’s bidding and continues to rely on terror tactics to subdue domestic dissent. In other words, he has become the ideal neighbor in the eyes of the increasingly autocratic Putin regime.

Some Ukrainian commentators have suggested that without the 2004 Orange Revolution and the 2014 Euromaidan Revolution, Ukraine might also have shared the same fate as Belarus. Indeed, recent claims by the US and UK of Kremlin plots to install a puppet regime in a militarily occupied Ukraine suggest that Russia continues to hope for a possible future Belarusian scenario in Kyiv.

Such hopes are wishful thinking that reflect a fundamental misunderstanding of Ukraine’s post-Soviet journey. While Russia has reestablished much of the authoritarian apparatus dismantled following the Soviet collapse, Ukraine has spent the past three decades slowly but surely consolidating its status as an emerging democracy with a competitive political system and a remarkably vibrant civil society.

Even its most ardent supporters would acknowledge that Ukrainian democracy remains in many ways deeply flawed and is very much a work in progress. Nevertheless, it is still clearly light years away from the one-party police states that have taken root in Russia and Belarus. If Minsk serves as a model for Moscow’s preferred form of bilateral relations, democratic Ukraine remains Russia’s worst nightmare.

Many Western commentators now appear to view Belarus as a lost cause. However, before completely writing off this European nation of almost ten million, it is important to remember the sheer scale of the protests that forced Lukashenka to abandon his former neutrality and side decisively with the Kremlin.

During the initial weeks of the country’s August 2020 pro-democracy protest movement, unprecedented numbers of Belarusians took part in rallies. In Minsk alone, hundreds of thousands flooded the streets, representing a remarkable turnout in a city of around two million.

The severity of the regime’s response succeeded in silencing their voices, but the brutality of these reprisals has also served to underline the need for fundamental change. At the same time, Putin’s role as Lukashenka’s protector has forced many Belarusians to rethink their previously positive attitudes towards closer ties with Russia.

This should make Moscow nervous. While the Kremlin has managed to dramatically tighten its grip on Belarus, the simmering political crisis in the country makes it a potentially weak link in Russia’s defenses.

Ukraine is well-placed to take a lead in international efforts to undermine the position of the Lukashenka regime. This presents some obvious challenges, especially given Ukraine’s relatively strong economic ties with Belarus and Kyiv’s close relationship with Minsk in the energy sector. However, as the country most directly threatened by Russia’s gradual occupation of Belarus, Ukraine has little choice but to overcome these obstacles.

One of the top priorities should be the expansion of existing economic sanctions against Belarus. While Russian financial support can compensate for some of the losses incurred, Belarus will not be able to completely cover the costs of a comprehensive economic blockade. This will leave the regime without the money to pay for the vast apparatus of repression it depends on.

The entire democratic world would potentially benefit from a tougher approach towards Belarus. With Russia and China now moving closer together, the struggle between democracy and resurgent authoritarianism looks set to define the climate of international relations for the coming decades. In such circumstances, it is vital to defend democratic gains in frontline countries such as Ukraine while also supporting promising democratic movements in strategic borderlands like Belarus.

For far too long, Putin has enjoyed the initiative in his confrontation with the West. This has allowed him to set the geopolitical agenda and keep Western leaders firmly on the defensive. Belarus now offers an opportunity to reverse this dynamic while supporting the aspirations of the Belarusian people and enhancing Ukrainian security. As the region’s most prominent fledgling democracy, Ukraine has the necessary experience to play an important role in this process.