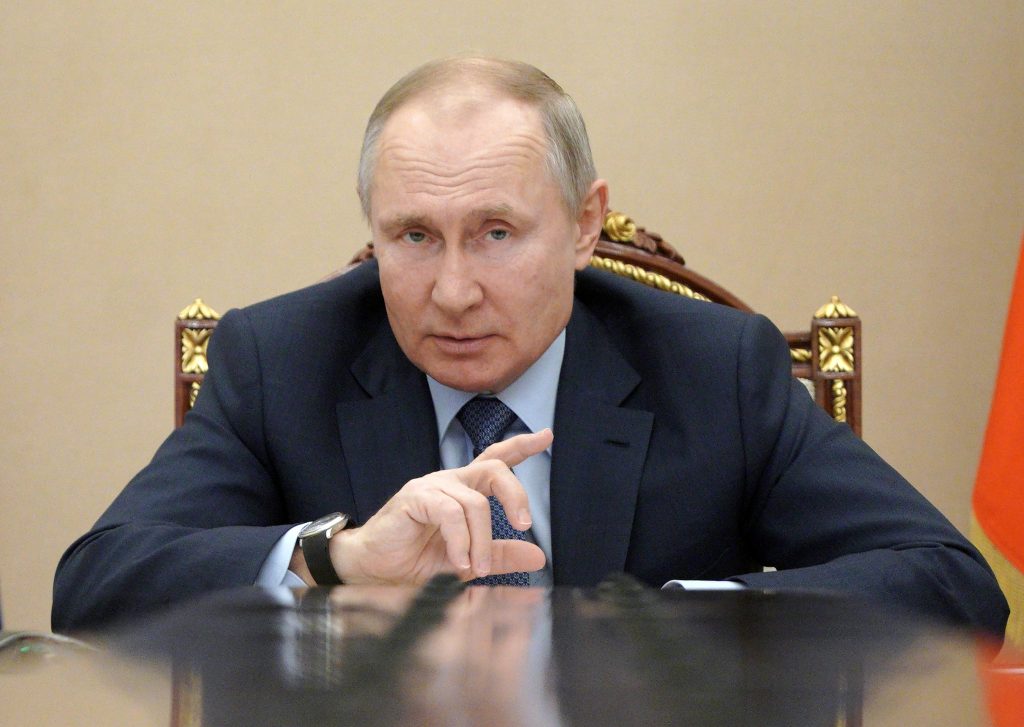 And just days before the military drills began, a new pro-Kremlin Belarusian political party held its founding congress in Minsk on March 6. Prominent guests included a Russian lawmaker from Ukraine’s occupied Crimean peninsula and an advisor to Moscow-backed separatists in eastern Ukraine.

As the Belarus crisis enters its eighth month, the strategy of Russian President Vladimir Putin is coming into clearer focus: leverage the unrest, the political uncertainty, and Belarusian dictator Alyaksandr Lukashenka’s vulnerability in order to create a fait accompli assuring Moscow’s long-term dominance over the country.

Russia is steadily building the architecture that would allow it to expand its political and military footprint on the territory of its smaller Western neighbor. The Kremlin is methodically laying the groundwork to cement its hegemony over Belarus, regardless of how the political crisis is resolved or whether Lukashenka himself remains in power.

A key component of that architecture is military. Moscow has long sought to turn Belarus into a de facto extension of its own Western Military District by establishing effective dominance over its neighbor’s armed forces and gaining basing rights on its territory. And in recent months, Moscow has made giant leaps toward these goals.

Russia and Belarus have already planned a record number of joint military exercises for this year, culminating with the massive Zapad-2021 maneuvers scheduled for September 2021. On March 2, the two countries’ defense ministries signed a five-year strategic partnership agreement for the first time. And on the same day, Lukashenka appeared to drop his long-standing objection to a new Russian airbase on Belarusian territory.

This month will also witness two sets of joint military exercises, from March 9-20 at the Polivno training range in Russia’s Ulyanovsk Oblast, and from March 15-27 at the Osipovichsky training facility in Minsk Oblast.

Dmitry Mezentsev, Russia’s Ambassador to Belarus, has stated that Moscow has no intention of creating a single army with Belarus. But whether or not that is the case, the Kremlin has nevertheless long sought to turn the Belarusian armed forces into effective adjuncts of its own military.

In the past, Shoigu has also proposed integrating the defense and security apparatus of Belarus and Russia into a joint decision-making center in Moscow. A similar model has already been implemented in Georgia’s Russian-occupied regions of Abkhazia and South Ossetia.

Lukashenka had resisted these efforts in the past. It is unclear whether his current political vulnerability following seven months of unprecedented anti-regime protests will lead him to be more pliant.

Russia’s military strategy in Belarus can easily be derailed if Moscow fails to control its neighbor’s politics. The Kremlin now appears to be taking steps to address this issue. On March 6, the newly formed pro-Kremlin party Soyuz (Union) held its founding congress in Minsk.

The identities of the Russian politicians present at the event sent an unmistakable message. Featured prominently were Russian State Duma deputy Dmitry Belik, who represented Sevastopol in the illegally annexed Crimean peninsula; Alexander Kazakov, who served as an advisor to separatist leader Aleksandr Zakharchenko in eastern Ukraine’s self-styled Donetsk People’s Republic; and Viktor Yatsenko, who was the “Minister of Communications” for that unrecognized republic.

Political analyst Olga Kharlamova told Deutsche Welle that Soyuz is “a tool of influence” for Russia that allows Moscow “to stake out territory” in the Belarusian political system. Kharlamova added that this territory would expand if Kremlin-backed constitutional changes are implemented. Russia is currently pressuring Lukashenka to revise the Belarusian Constitution in order to increase the authority of the country’s parliament at the expense of the presidency.

If the Kremlin gets its way, “political parties will have more room for maneuver and there will be not one, but at least two or three parties that will represent Russian interests, regardless of how they are called and positioned,” Kharlamova commented.

As is usually the case, the Putin regime is keeping its options open and operating on several fronts in Belarus. It is maneuvering politically to control the outcome of the political crisis, whether Lukashenka succeeds in clinging on to power or not. At the same time, Moscow is building the architecture to turn Belarus into an extension of Russia for military purposes, a development that would dramatically alter the security equation on NATO’s eastern flank.

This is a security threat that the United States and its allies cannot afford to ignore.

Belarus opposition leader calls on West to get tough

Belarus opposition leader Sviatlana Tsikhanouskaya is calling on Western governments to adopt a far tougher stance towards dictator Alyaksandr Lukashenka in order to bring his 26-year reign to an end.