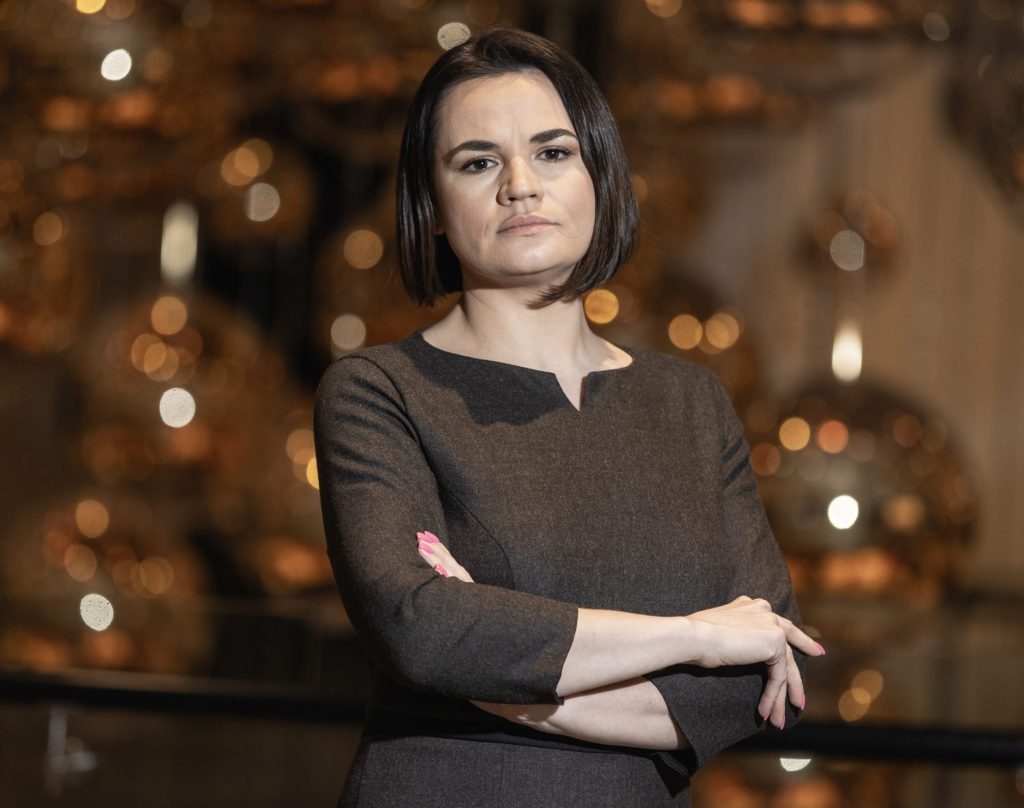 Exiled Belarusian opposition leader Sviatlana Tsikhanouskaya is scheduled to hold an online meeting with members of the US Congress next week. The virtual hearing on March 17 will be the latest opportunity in Tsikhanouskaya’s campaign to engage US policymakers and increase the momentum of international efforts to end the 26-year reign of Belarusian dictator Alyaksandr Lukashenka.

Speaking in Geneva on Monday, Tsikhanouskaya said that she is in contact with US officials and claimed that she had received a strong message of support from US President Joe Biden following his November 2020 election victory. She hopes to be able to visit to Washington DC in person in the near future.

American support is recognized as crucial to the future of the seven-month pro-democracy uprising in Belarus that first broke out in August 2020 following a deeply flawed presidential election.

The US initially reacted cautiously as unprecedented protests spread across Belarus in late summer and early fall 2020. This underwhelming response led to partisan claims within the US political arena that America was abdicating its traditional role as a supporter of democracy in the post-Soviet region. During the US presidential election campaign, Joe Biden accused President Trump of refusing to speak out on behalf of protesters and vowed to support the emergence of a democratic Belarus.

Since the Biden administration took office in early 2021, the US has increased sanctions on the Lukashenka regime. In mid-February, American officials introduced visa restrictions targeting more than 40 Belarusians including many individuals within law enforcement structures who are accused of human rights abuses against protesters. “We stand with the brave people of Belarus and support their right to free and fair elections,” commented US Secretary of State Antony Blinken.

While such steps and statements are welcome, Tsikhanouskaya would like to see much more. In recent months, she has repeatedly called on the US and European Union to adopt a tougher stance towards the Lukashenka regime. “Unfortunately the reaction of the international community to the political crisis in Belarus is very modest,” Tsikhanouskaya commented during a January 27 event hosted by the European Council of Foreign Relations featuring the participation of the French, Romanian, Polish, and Lithuanian foreign ministers.

For over half a year, the Belarusian opposition leader has been tireless in her efforts to drum up greater support in Western capitals. Since being forced to flee Belarus in the immediate aftermath of the country’s August 9, 2020, presidential vote, she has been based in neighboring Lithuania but has travelled extensively. While dictator Lukashenka has remained in Minsk in a state of mounting international isolation, Tsikhanouskaya has held meetings with German Chancellor Angela Merkel, French President Emmanuel Macron, and a host of other European leaders. In December 2020, she was warmly received at the European Parliament in Brussels, where she accepted the annual Sakharov Prize on behalf of Belarus’s democratic opposition movement.

Tsikhanouskaya has visibly grown in stature during these months of high-level European diplomacy. Her energetic tour of European capitals represents a remarkable achievement for a woman who less than one year ago entertained no political ambitions or desire to enter public life. Indeed, Tsikhanouskaya’s career trajectory as a political leader is an unlikely one. The incredible story of how she rose to the challenge of leading the Belarusian opposition has inspired countless feel-good (and often borderline saccharine) feature articles and profiles in the international media about this “housewife turned leader by fate.”

Even cynics must admit that it is quite a tale. Tsikhanouskaya first entered the political fray in mid-2020 when the Belarusian authorities allowed her to stand as a presidential candidate in place of her imprisoned husband, an opposition blogger who had been planning to run in the election prior to his detention. It is widely believed that the old-fashioned Homo Sovieticus regime of Alyaksandr Lukashenka simply did not believe that a woman could pose a serious political threat.

That supposition proved to be a grave error of judgement. While Lukashenka had no intention of allowing a free or fair vote to take place, Tsikhanouskaya’s presence on the ballot enabled the diverse Belarusian opposition forces and disillusioned members of the public to unite around her candidacy. In the run up to the August vote, her campaign rallies began drawing record crowds across the country. It soon became clear that after decades of dictatorship, Tsikhanouskaya had succeeded in capturing the imagination of the Belarusian public. This momentum meant that when the authorities duly attempted to rig the election, widespread protests were virtually inevitable.

Although Tsikhanouskaya has been living in enforced exile since August 2020, she has continued to serve as a figurehead for the protest movement inside Belarus while seeking to mobilize the international community. Her emergence as the accidental leader of a political revolution has already attracted considerable attention and makes her exactly the kind of romantic figure that would be likely to appeal to American audiences.

Likewise, the movement she leads also has much to make it appealing to the US public. Belarusian protesters have demonstrated remarkable courage and admirable creativity over the past seven months, defying one of the harshest crackdowns in modern European history while remaining true to a strictly non-violent ethos.

Next week’s virtual Congress event could help to raise Tsikhanouskaya’s profile in the US. However, the Belarusian opposition leader knows she must cross the Atlantic if she is to win the kind of enhanced support she craves.

Ultimately, Tsikhanouskaya acknowledges that the widespread moral support and international sympathy generated by Belarus’s democratic uprising will count for little unless Western governments can be persuaded to significantly increase the pressure on Lukashenka. “It is up to every country to live up to their values of democracy,” she commented this week. “All democratic countries must prove that human rights are not just words to them.”