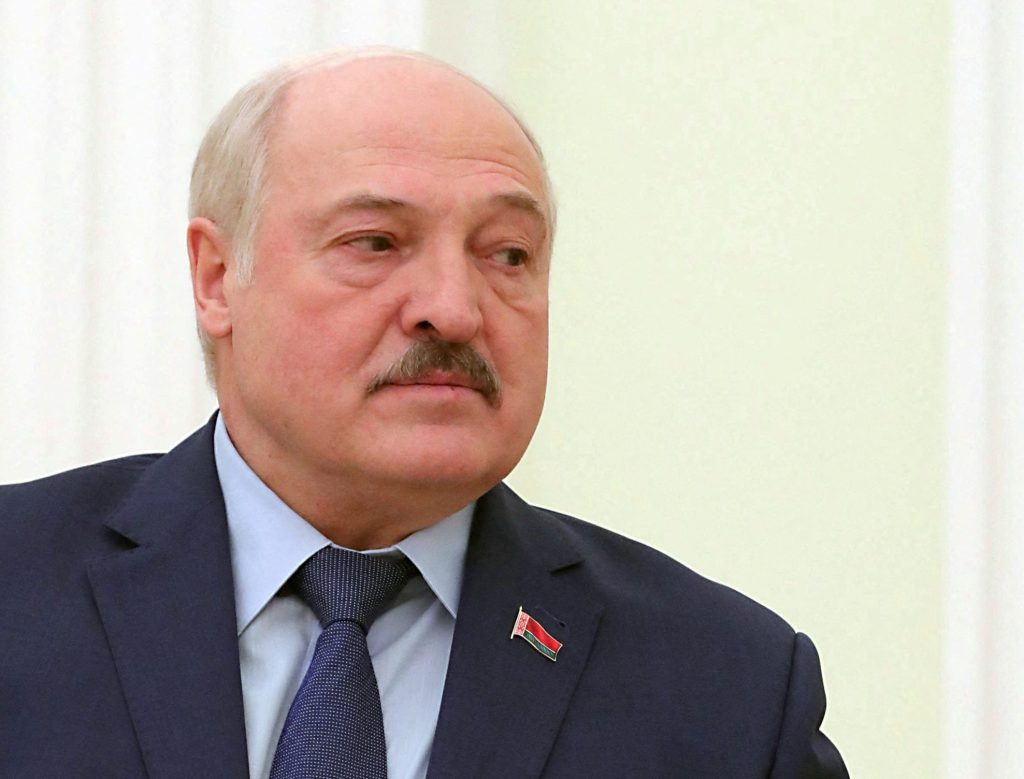 Alyaksandr Lukashenka has gotten himself into a tight spot.

Like his masters in the Kremlin, the Belarusian autocrat was counting on a quick and decisive Russian victory in Ukraine. Lukashenka apparently calculated that aiding, abetting, and facilitating Vladimir Putin’s aggression would pay off for him.

By allowing Putin to use Belarusian territory as a staging area for Russian troops and as a platform to launch airstrikes against Ukrainian cities, the dictator in Minsk hoped that a grateful Kremlin leader would shower him with aid and let him remain in power.

Lukashenka, of course, calculated wrong. Instead of a rapid and triumphant campaign, Russia’s blitzkrieg has turned into a quagmire.

As Putin shifts the focus of the war away from taking Kyiv and toward gaining complete control of the Donbas region in the east of the country, the platform Lukashenka provided Putin to attack the Ukrainian capital is no longer so useful. According to Ukrainian military intelligence, “all battalion tactical groups that have so far been amassed in Belarus, near our northern borders, are now redeployed to eastern Ukraine.”

If Moscow no longer relies on Belarus for its invasion, one has to wonder how much longer Lukashenka himself will be seen as useful by the Kremlin. “The Belarusian dictator understands this well, and therefore he tries to prove to the Russian leadership and Putin personally that he is needed,” political analyst Pavel Usov wrote in a recent commentary for Deutsche Welle. “Lukashenka understands that the main resource supporting his political survival is serving the Kremlin’s domestic and international agenda.”

Lukashenka now appears to be trying hard to prove his usefulness. The Belarusian Defense Ministry announced that it would be holding joint air defense exercises with Russia from April 26-29. But even as he tries to please and placate Russia, Lukashenka is increasingly at odds with Belarusian public opinion.

According to a new poll by the independent Belarusian sociologist Andrei Vardomatsky, two-thirds of the country are opposed to the use of Belarusian infrastructure for Russia’s military operations in Ukraine and just 11 percent support Belarusian troops entering Ukraine.

Significantly, 50.4 percent of Belarusians disapprove of Russia’s actions in the war while 42.7 percent approve. Nearly half of Belarusians, 45.2 percent, sympathize with Ukraine. Public opinion in Belarus is divided over who is responsible for the war, with a 24 percent plurality blaming Russia, 20 percent blaming the United States, and 17 percent blaming Ukraine.

And therein lies Lukashenka’s conundrum. In order to please his masters in the Kremlin and preserve his political skin, Lukashenka is forced to go against the clear wishes of his population.

With its economy contracting and Russian subsidies shrinking, Belarus is also subject to crippling Western sanctions. The Belarusian Economic Ministry says the economy showed zero growth in the first quarter of 2022. Some estimates forecast that it could contract by as much as 6.5 percent this year.

Russia’s invasion of Ukraine is a paradigm-shifting event that will have knock-on effects across the former Soviet space, not least in Belarus.

For decades, Lukahshenka has been the master gamer, surviving on subsidies from Russia while maintaining a degree of independence from Moscow by courting the West when it suited his purposes. But his brutal crackdown on dissent following the August 2020 presidential election, his subsequent tight embrace of Putin, and his facilitation of Russia’s disastrous invasion of Ukraine have upended the game for the Belarusian dictator.

He has sold his soul to Putin and in the process alienated his own population, but his usefulness to the Kremlin leader is now also a diminishing asset. Sooner or later, Putin will likely seek to replace him with a more pliant and less mercurial figure. Unlike in the past, the option of courting the West is no longer available.

Meanwhile, if Russia suffers a humiliating defeat in Ukraine and Putin is politically weakened, Lukashenka will be left without a patron and vulnerable to the wrath of his own people. Regardless of how the Ukraine war ends, Lukashenka appears destined to emerge from the conflict as a weakened and diminished figure.

Image: Belarus dictator Alyaksandr Lukashenka had little choice but to support Vladimir Putin's invasion. He now finds himself in a precarious position. (/FW1F/Alexandra Hudson via REUTERS)