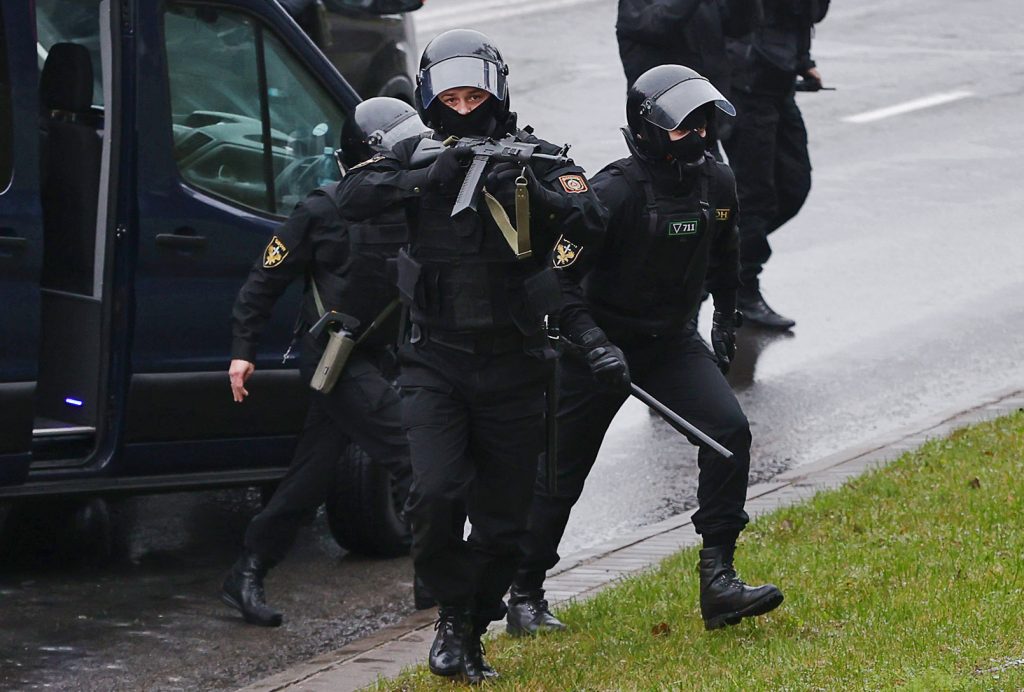 More than four months since mass protests first erupted over a stolen presidential vote, Belarus’s pro-democracy movement refuses to quit. Every week sees new rallies and ever-more inventive demonstrations organized by people across the country. Their immediate demands are simple: free elections, the release of political prisoners, and an end to regime violence. However, the vision they embrace is far broader and indicates a dramatic shift in the map of democratic Europe.

Dictator Alyaksandr Lukashenka remains defiant, but he has clearly lost all legitimacy. After 26 years in complete control of the country, he has become entirely dependent on the continuing loyalty of the security services. This ring of steel keeps Lukashenka in power, but the terror tactics he employs are no longer capable of silencing the Belarusian people. Instead, regime brutality is fueling a national awakening and helping to create a new Belarus. By seeking to subjugate his own population, Lukashenka is unwittingly pushing the Belarusian people away from the Soviet past and towards a European future.

The current violence of the Lukashenka regime is nothing new. On the contrary, it is all too familiar and has long been the favored official response to calls for a democratic transition in the country. In December 2010, tens of thousands gathered in central Minsk to protest a rigged presidential election. On that occasion, riot police used extreme force to disperse the large crowds in a matter of minutes. The heavy-handed nature of the 2010 crackdown left many Belarusians stunned. The next day, the central squares of Minsk and other major cities remained empty.

This year has been altogether different. The confrontation actually began long before polling day and featured large-scale arrests of opposition forces and demonstrators. By the time the campaign actually got underway, all of Lukashenka’s potential rivals had been imprisoned or forced into exile. Throughout the late spring and early summer months, there was also evidence across Belarus of a growing hunger for change among a population that had grown tired of state terror and authoritarian stagnation.

When the Lukashenka regime allowed the seemingly innocuous wife of one jailed candidate, Sviatlana Tsikhanouskaya, to enter the presidential race, the public rallied to her candidacy despite her lack of political plausibility. Tsikhanouskaya may not have been an obvious presidential candidate, but she proved an effective figurehead for an opposition movement that soon swept the nation. In the weeks leading up to the vote, Tsikhanouskaya drew tens of thousands to campaign rallies.

Lukashenka’s response to the looming threat of mass protests was not subtle. He warned darkly that Belarusians should remember the notorious 2005 Andijan massacre in Uzbekistan, when security forces killed hundreds of protesters. As Belarusians took to the streets on the night of the August 9 election, it soon became clear that Lukashenka was not bluffing. In the first days of the protest movement, security forces shot and killed an unarmed demonstrator in Minsk. Thousands more across the country were detained, with many reportedly subjected to torture and systematic human rights abuses. Even by the standards of the regime, the response was draconian.

The crackdown has continued unabated in recent months. But rather than scaring the Belarusian people into silence, it has presented them with an inescapable choice. While many Belarusians were previously content to overlook or ignore the authoritarian realities of the Lukashenka regime, the dramatic escalation on state violence since summer 2020 has forced people to view the country’s future in stark black-and-white terms.

With the confrontation now in its fifth month, it is becoming possible to place it in a broader historical context. Many commentators see it as the largest crackdown in Europe for the past 30 years. Since August, over 30,000 Belarusians have been detained. This is thought to be significantly more than the total number of detentions during the period of martial law in Poland in the early 1980s, despite the fact that Poland has a population four times larger than Belarus.

Amid the gallows humor that has helped sustain the protests, Belarusians like to joke that the crackdown has achieved true equality in the country. Members of every social group and class have been subject to imprisonment. Indeed, there has been little room for preferential treatment on grounds of age, gender, or professional background, with the lists of detainees including everyone from university students and political activists to pensioners and factory workers. Some of Belarus’s most famous athletes have been incarcerated, along with a former Miss Belarus beauty queen.

This defiance is helping to define the new Belarus. It is a country no longer prepared to stay silent in the face of the regime’s criminal actions and increasingly self-confident in its embrace of European democratic values. Efforts are also underway to hold Lukashenka and his security apparatus accountable. Exiled members of law enforcement are working to chronicle abuses, while opposition leader Tsikhanouskaya has recently unveiled an online platform to collect evidence of regime crimes as part of her People’s Tribunal initiative.

The terror tactics that proved so successful in 2010 have failed in 2020. Instead, the most extensive crackdown in modern European history has only served to strengthen the conviction that today’s Belarus needs to undergo fundamental change. It is still far from clear exactly when and how this change will arrive, but it is equally obvious that there is no longer any way back to the old status quo.

The future of Belarus depends on many variables including Russian influence and the role of the incoming Biden administration in the US. However, the historic transformation that is taking place within Belarusian society is not primarily geopolitical in nature. By demonstrating the worst excesses of his authoritarian rule, Lukashenka has helped lay the foundations for a potentially vibrant future democracy. This will necessarily take a long time to build, but there is now a growing sense of inevitability about the process that lies ahead.