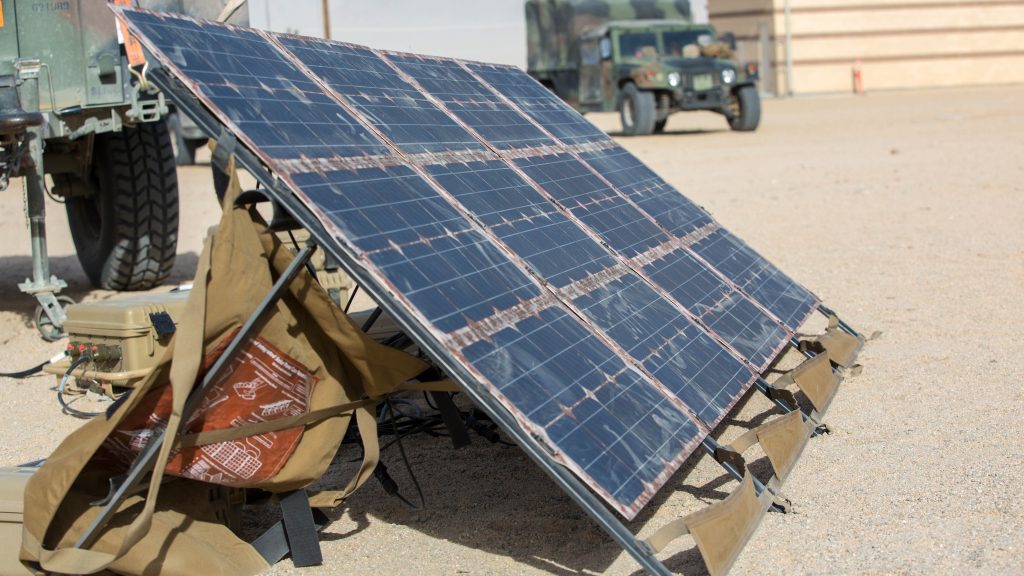 President-elect Biden called climate change the “greatest threat” to US national security, echoing many national security and military leaders. He has already made historic commitments to climate action and clean energy to address this threat. As the largest institutional consumer of energy in the world, the US Department of Defense (DoD) has a critical role in fulfilling those commitments. Energy is essential to every aspect of military operations, from fueling ships and aircraft to powering military bases. Investing in clean energy will strengthen US military capabilities and resilience while making meaningful progress on climate goals.

The incoming commander-in-chief and US military forces face a turbulent global strategic environment. The US military must be prepared for the resurgence of strategic competition between nations, global instability fueled by climate change and political upheaval, and threats to the homeland through space and cyberspace. Resilience and flexibility are the watchwords of the next generation of national security challenges, and the United States must invest to develop these capabilities in its forces.

The United States must transform the way it powers its military in order to address these challenges. Clean energy can be a weapon, enabling forces to deploy more quickly and for longer, and helping keep troops and the homeland safe. A new DoD clean energy innovation agenda will build military capabilities and resilience, strengthen US leadership in the race to develop breakthrough clean energy technologies, and create thousands of American jobs to accelerate the economic recovery from the pandemic.

Military leaders have long been concerned about the US military’s dependence on fossil fuels. In 2003, then-Lt. Gen. Jim Mattis, commander of the First Marine Expeditionary Force, proclaimed that future US military forces must “be unleashed from the tether of fuel.” The US Army later estimated that between 2003 and 2007, one in twenty-four fuel convoys ended in a US casualty, and attributed more than three thousand US military and DoD contractor deaths to fuel convoys in Iraq and Afghanistan during that time period.

US troops know that clean energy technologies can reduce their need for fuel, extend their range and duration, and mitigate risks. Marines and soldiers have utilized solar backpacks and blankets to recharge the batteries powering their communications equipment. The army is investing in electrifying its vehicles and weapons systems to reduce refueling needs. And the US Navy has deployed hybrid drive ships to extend time at sea. Many of these initiatives have proven promising and effective, only to stagnate under current leadership.

A new DoD Office of Energy Innovation led by a senior official could coordinate research and development efforts across DoD and the rest of the government. These efforts would focus on electrifying the tactical edge, which includes: accelerating the development and deployment of renewable-powered microgrids, and transitioning to new electrically powered tactical vehicles, unmanned underwater and surface watercraft, and remotely piloted aircraft.

The Pentagon should also collaborate with other government agencies and the commercial aviation sector to launch a research and development initiative focused on transforming flight. Jet fuel comprises the majority of DoD’s energy budget, and air transport has proven difficult to decarbonize. This initiative would invest in the development of new hybrid and electric flight propulsion systems, enhanced aerodynamic flight body designs, durable and lighter advanced materials, and low-emission renewable fuels.

Investments in these breakthrough technologies would strengthen the US military’s ability to operate and project power in contested environments. Further, these technologies have the potential to transform the clean energy economy, just as many technologies originally developed for military use led to revolutionary innovations like microwaves, radar, and the Internet.

Clean energy is a powerful tool to strengthen the security of military installations. The US military increasingly relies on its domestic bases for critical missions and capabilities. From unmanned aircraft providing overwatch for troops in the field to the cyber operators preventing foreign adversaries from interfering with elections, the US military depends on domestic critical infrastructure like electric grids and communication networks.

That critical infrastructure is facing unprecedented risk. Utilities across the western United States are preemptively shutting off power to mitigate wildfires. Devastating storms across the US Gulf and Atlantic Coasts will only become more frequent and severe. And foreign adversaries have been able to gain operational access to the power grid, including power plant control centers. The Trump administration rolled back climate change policies and eliminated the senior DoD position dedicated to climate adaptation, even as storms and floods have caused nearly $10 billion of damage on domestic DoD bases.

The US military must invest in a large-scale program to deploy clean energy and energy storage systems to protect critical defense missions and installations. This program could build from the recently announced Federal Consortium for Advanced Batteries to develop a whole-of-government approach to energy storage.

First, the United States should scale its clean energy manufacturing capabilities to strengthen its economic and national security. Many of the energy storage systems being deployed today rely on imported batteries, creating potential supply chain vulnerabilities. Lithium, for instance, is a critical material used in most energy storage applications and found in substantial quantities in many states, but only one mine is currently operating  in North America. The DoD could invoke the Defense Production Act (DPA) to create a domestic supply chain for critical materials and manufacturing capacity for advanced energy storage systems. Using DPA authority, the US government could accelerate the development of secure materials and manufacturing, specifically for systems to support national security assets and facilities.

Second, the US Department of Energy (DOE) has significant technical and intelligence capabilities and is the Sector Specific Agency for the energy sector. DOE should analyze grid threats and assess market opportunities for battery deployments on military bases and in defense communities, as well as focus research and development investments on long-duration energy storage and microgrid controls.

Finally, DoD should dedicate at least $5 billion to deploying resilient energy storage systems at critical installations across the United States, which would significantly strengthen the security of core national security assets and facilities. The impact of this investment could be increasingly expanded through private sector financing for DoD energy projects. DoD has already deployed hundreds of megawatts of renewable energy through public–private partnerships. The DoD should streamline these authorities and focus them specifically on projects that deliver security and resilience.

The Biden-Harris administration can reestablish DoD and the US armed forces as leaders in clean energy. The next secretary of defense should establish aggressive goals for climate security and clean energy, and an organizational structure capable of achieving those goals, including dedicated senior positions with budgetary and policy authority. These senior leaders should ensure that new DoD buildings and non-tactical vehicles will be carbon and energy net-zero, and that existing facilities will be retrofitted within the next decade. Further, climate and energy impacts should be a consideration in the development of weapons systems and platforms and in future basing decisions.

Military and national security leaders from across the political spectrum know that climate change is a threat and the clean energy transition is critical to a secure future. Now it is time for action to meet the magnitude of the challenge.

The appearance of US Department of Defense (DoD) visual information does not imply or constitute DoD endorsement.

Operational energy across the Atlantic: US military & NATO perspectives