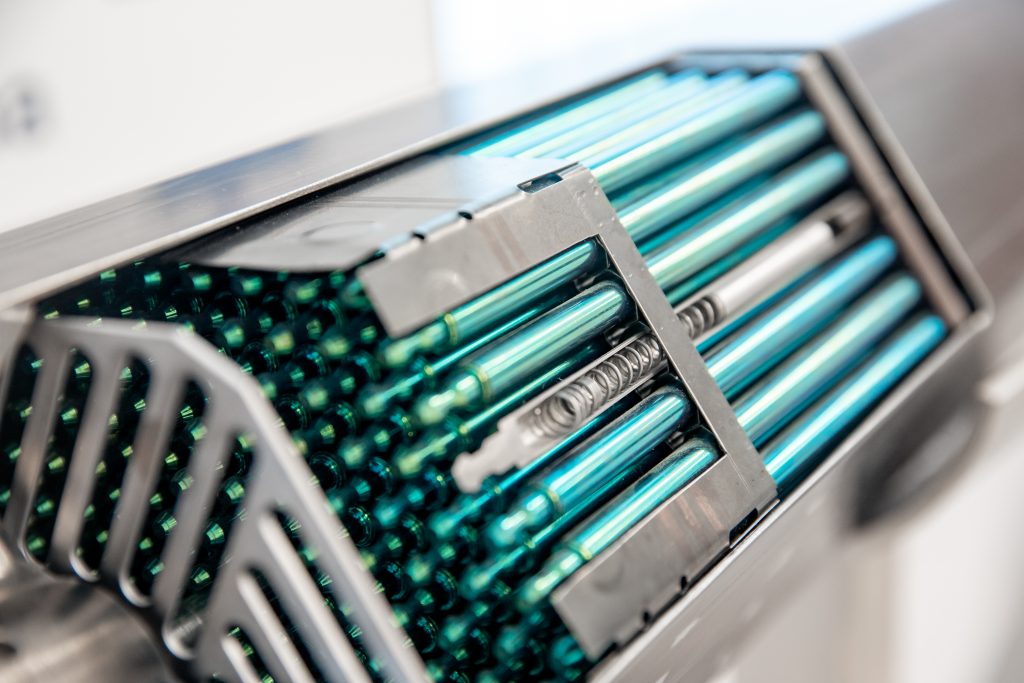 Over the past five years, the United States has made meaningful progress in the development of advanced nuclear reactor designs critical to keeping the country on the cutting edge of nuclear technology. The latest step is the US Department of Energy’s (DOE) selection of TerraPower and X-Energy to each receive $80 million in the initial year, for a total of $160 million in initial funding as part of its new Advanced Reactor Demonstration Program (ARDP), the first installment of a seven-year, cost-shared partnership to deploy the first two commercial-scale advanced reactors. These positive trends signal a growing need for DOE to address a key challenge that many reactor developers face as they move toward deployment: the lack of a reliable source of high-assay low-enriched uranium (HALEU) for fuel.

Light-water reactors currently comprise the entirety of the commercial nuclear fleet in the United States. These reactors are fueled with low-enriched uranium (LEU), or uranium enriched to contain approximately 5 percent of the uranium-235 (U-235) isotope, which is readily available from nuclear fuel producers in the United States, Europe, and Russia. Advanced reactors like those being developed by X-Energy and TerraPower, however, will require HALEU, or uranium enriched to up to 19.75 percent U-235. The use of HALEU fuel unlocks the benefits of advanced reactors, including more compact designs, lower capital costs, longer runtimes between refueling outages—in some cases a single reactor core can last for decades—and potentially reduced amounts of used nuclear fuel. Higher uranium enrichments in HALEU fuel also offer more flexible and efficient operations for advanced reactors, and they provide for HALEU nuclear fuel designs that could improve the efficiency of existing large light-water nuclear reactors.

However, unlike LEU, there is no current domestic commercial production infrastructure for HALEU. DOE has taken an important first step by supporting a demonstration project by Centrus Energy to establish a small HALEU production line in Ohio using a domestic centrifuge technology. DOE selected a US-origin enrichment technology for the demonstration because it could produce HALEU not only for commercial advanced reactors, but also for “defense reactors that require the use of HALEU produced using US- origin technology.”

A second effort under way at DOE’s Idaho National Laboratory (INL) will reprocess previously used highly enriched uranium (HEU) fuel to produce small amounts of HALEU for reactor demonstrations. However, the fuel contains impurities that may make it unsuitable for use in many reactor designs, and the available quantity is too small to provide an assured, long-term fuel supply. In addition, INL currently restricts the reprocessed fuel from leaving its campus.

The need to establish a long-term supply solution has been echoed by legislators and led to provisions addressing HALEU concerns in the Energy Act of 2020, which was ultimately incorporated into the Consolidated Appropriations Act of 2021. The legislation, “requires the Secretary of Energy to establish a program to support the availability of high-assay low-enriched uranium (HALEU) for civilian domestic research, development, demonstration, and commercial use.” The availability of HALEU is the most challenging issue facing advanced nuclear developers, and the number one concern that keeps them up at night, according to the US Nuclear Industry Council, based on its March 2020 member survey.

In an attempt to move forward on a long-term solution, TerraPower—in fulfilment of their ARDP obligation to identify a plan by which to obtain fuel—has announced its intent to partner with Centrus to establish a domestic, commercial-scale HALEU production facility. But the success of any reactor developer will depend on its ability to design a reactor that can be successfully licensed and sign commercial contracts for the sale of that design to future customers. Yet, as the initial commercial contracts for advanced reactors have not yet been inked, this uncertainty is a major roadblock preventing any potential HALEU producer from raising capital to fund the infrastructure needed for HALEU production. The lack of a fuel supply, in turn, also makes it harder for reactor developers to sell their reactors, creating a classic “chicken vs. egg” problem.

While the government has addressed part of this problem through the ARDP, in order to address the issue of fuel uncertainty, the US government must step in to ensure a supply of HALEU is secured for current and future advanced reactors. There are three potential avenues by which the US government could ensure this supply. The first is the depletion and down-blending of HEU, an option that would likely be expensive and unsustainable, since the United States ended HEU production in 1992. While a small quantity of excess HEU for weapons has been set aside for isotope production and existing research reactors, the US National Nuclear Security Administration expects this inventory to dry up around 2030. The US Navy, which has a larger inventory of HEU set aside for its use, would be unlikely to support using a portion of its supply (needed for the naval reactor program) for these purposes.

A second option could potentially be procurement from Russia. However, this option is not likely palatable to the US government. Further complicating any potential imports from Russia is the recently extended Russian Suspension Agreement, which over time will limit, albeit with certain exemptions, Russian uranium imports to 15 percent of US reactor enrichment needs.

A third option—the establishment of a US HALEU reserve—presents the most tenable approach to solving the US HALEU deficit. A reserve would commit the US government to purchasing HALEU produced by commercial fuel companies in the United States, thereby providing demand certainty that would enable them to raise capital. Likewise, a reserve—and more importantly, the commercial HALEU production it would catalyze—would build confidence among advanced reactor developers and their customers that fuel would be readily available after the successful demonstration of their designs. In addition to coordinating the development of a domestic reserve, DOE should work with industry and the Nuclear Regulatory Commission to establish a framework for transporting HALEU, which may require the development of new containers due to its higher assay of U-235. The need to develop transportation packages and certifications for HALEU is also called out in the Consolidated Appropriations Act of 2021.

The goal of a US HALEU reserve should be to support and incentivize domestic commercial HALEU production by providing a guaranteed customer for HALEU enrichment. This solves the chicken vs. egg problem by giving utilities confidence that they can purchase an advanced reactor knowing that the fuel production capacity exists to support that reactor for the long term. A HALEU reserve filled with down-blended or reprocessed stocks does not solve the chicken vs. egg problem, and indeed, might actually be counterproductive because it would compete against, and likely displace, any nascent commercial production capacity.

Advanced reactors hold the promise of generating safe, secure, emissions-free electricity for Americans while positioning the United States as a key exporter of nuclear technology. But in order for this vision to become a reality, these reactor companies and their customers must secure access to HALEU without increasing US reliance on Russia. By working with industry to put in place the purchase commitments that support a commercial-scale US HALEU enrichment facility, the US government can serve as a bulwark against risk and sustain a new fuel supply chain for the advanced reactor market through mid-century and beyond.

Ambassador Thomas Graham, Jr. is Executive Chairman of the Board of Lightbridge Corporation. Admiral Richard Mies is President and Chief Executive Officer of Mies Group, Ltd. Ambassador Graham and Admiral Mies are the Co-Chairs of the Atlantic Council’s Nuclear Energy and National Security Coalition.

Learn more about the Nuclear Energy and National Security Coalition