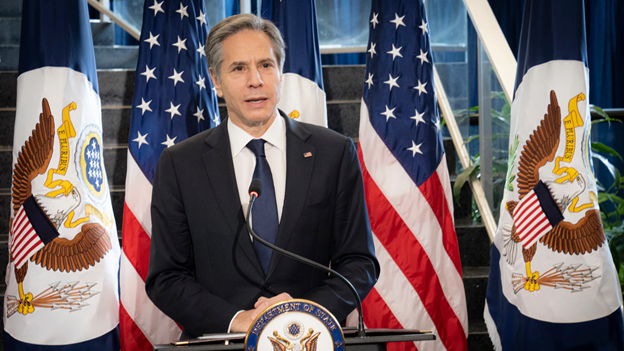 Speaking from the Chesapeake Bay Foundation’s Philip Merrill Center, US Secretary of State Antony Blinken delivered an address to usher in President Joe Biden’s Leaders Summit on Climate, which will begin this week on Earth Day. Secretary Blinken laid out the stakes of inaction on climate—from sea level rise to more severe wildfires to other extreme weather events—and detailed a range of efforts on climate adaptation and mitigation to address the challenges of a warming world.

As the Biden-Harris administration continues to build out its ambitious climate agenda in advance of the Leaders Summit on Climate later this week, we were thrilled to hear Secretary Blinken highlight the issues of climate adaptation, resilience, and equity. Although mitigation has been featured most prominently in many of the administration’s plans thus far, we believe it is essential for adaptation and resilience to receive equal weight and attention. We are advocating for climate action parity. As the Secretary mentioned, we are already seeing the impacts of climate change today, including deadly heatwaves that push people and our infrastructure past the breaking point. These impacts are also being felt even more acutely in the countries and communities that contributed the least to the climate crisis, and that lack the resources needed to adapt. We fully support and applaud the Secretary’s commitment to support these nations and communities with increased access to climate finance, improved early warning and response systems, affordable access to risk models and quantification, and more resilient infrastructure and food systems.

Kathy Baughman McLeod is the Director of the Adrienne Arsht-Rockefeller Foundation Resilience Center and Senior Vice President at the Atlantic Council.

An international issue with local implications

It was perhaps a bit unusual to see the US Secretary of State speaking at the headquarters of a regional environmental non-profit organization, the Chesapeake Bay Foundation’s Philip Merrill Center, but it set the tone for the Leaders Summit on Climate later this week, situating climate change as an international issue with highly localized impacts. The Philip Merrill Center was the first LEED Platinum building in the United States, and the Chesapeake Bay region is already one of the most impacted by climate change in the country; the setting pointed simultaneously to the possibility of meaningful climate action and the risks of inaction. Secretary Blinken’s speech did the same. It framed climate change as one of the defining challenges of our time, central to US foreign policy and requiring the full levers of the US government to solve, while simultaneously serving as an opportunity for US economic and environmental revitalization at the local level and leadership on the international stage.

Randy Bell is the Director of the Global Energy Center and the Richard Morningstar Chair for Global Energy Security at the Atlantic Council.

As the kickoff to the most important week yet for the Biden-Harris administration’s re-entry into the global fight against climate change, Secretary Blinken effectively framed just how high the stakes are for the United States across a number of national security and environmental issues. Yet, while this week’s Leaders Summit on Climate will have little trouble underscoring the challenge posed by climate change and the need for a robust commitment to fight it, the Secretary’s mention of the opportunities for US jobs and manufacturing within a changing energy system will be the major area to watch, one where the United States is not alone. The geopolitics of industrial leadership, trade, and global supply chains will run throughout the next phase of climate action, as raised ambition for the deployment of decarbonization technologies and renewable energy resources at an ever-greater scale is accompanied by growing interest around the world in establishing a stake in their development.

Reed Blakemore is the Deputy Director at the Atlantic Council Global Energy Center.

Secretary Blinken’s remarks: Secretary Blinken’s speech directly tied US foreign policy interests and international climate engagement to the benefits felt by US residents. Climate change threatens US livelihoods and national security, and further action to reduce global emissions will help mitigate those risks. Secretary Blinken called for his audience to look beyond the threats of climate change to the energy transition opportunities ahead. At this stage, China dominates the clean energy field in more ubiquitous renewable technologies like solar photovoltaics, wind turbines, battery storage, and electric vehicles. However, the United States can move toward building competitive advantages in the broader range of energy technologies necessary to achieve net-zero emissions. Further, US public financial institutions, such as the Export-Import Bank, can help stimulate market demand for US products and create more domestic jobs in the process, even in areas like emissions-free steel. Beyond economic prospects, expanding innovation and deployment in advanced energy technologies helps give the United States more credibility when inviting international partners to engage on climate action, such as the upcoming Leaders Summit on Climate.

Upcoming Summit: President Biden and his administration set a high bar for the upcoming climate summit by inviting forty heads of state and expecting announcements on increased climate ambition. Special Presidential Envoy for Climate John Kerry made significant efforts in his first few months to engage in dialogue with global leaders in the hopes that countries would raise targets in their Nationally Determined Contributions and make the announcement at the upcoming US-hosted event. However, some question if the event would be a success if countries attend but do not make stronger commitments. The 2021 climate calendar is uniquely packed with climate summits leading to the COP26 in Glasgow, and countries will have more opportunities to make announcements over the course of the year. While it is symbolic to make an announcement at the US-hosted summit, the reality of negotiating internal politics to reach consensus on ending coal finance or reducing emissions in the near term is complicated. Special Envoy Kerry holds significant diplomatic sway, but the more persuasive messaging to increase ambition will come from US domestic climate action setting an example and following through with financial and capacity building commitments to help other countries achieve their goals. At a minimum, countries showing up to the Leaders Summit on Climate this Earth Day shows they have confidence in US leadership and welcome the United States back to the climate negotiating table.

On China: President Xi has not confirmed his participation in President Biden’s Leaders Summit on Climate. China is reluctant to attend an event hosted by the United States and make a grand announcement on increased climate ambition, seemingly at the behest of the United States, which it views as having abdicated a leadership role on climate over the last few years. If China should attend, it is probably more interested in congratulating the United States on stepping up ambition and rejoining international efforts.

Margaret Jackson is the Deputy Director for Climate and Advanced Energy at the Atlantic Council Global Energy Center.