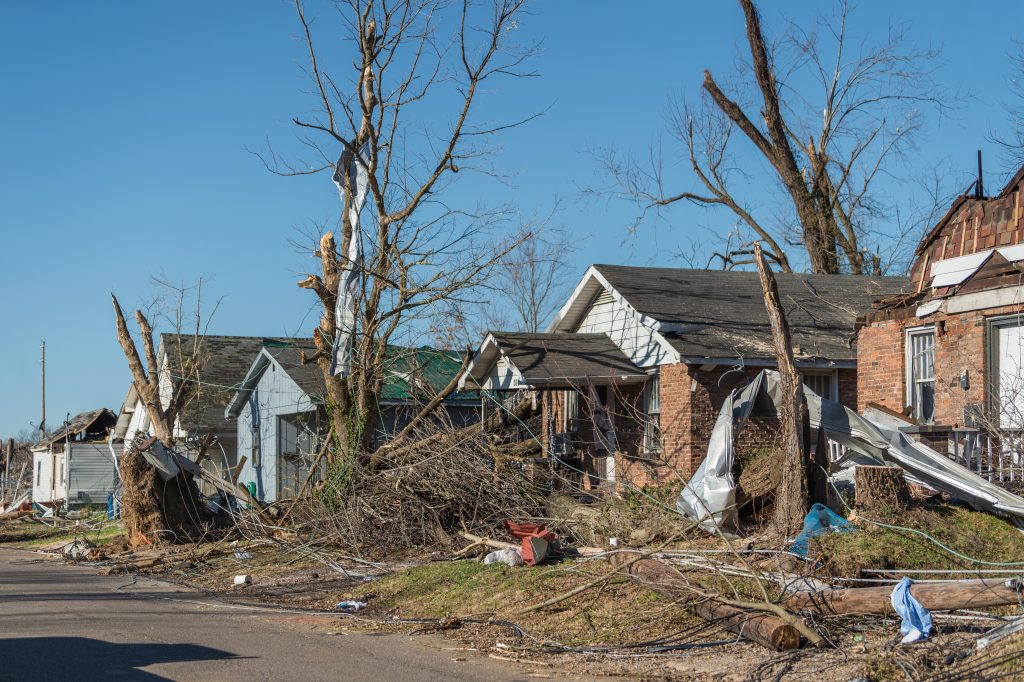 During the overnight hours of Saturday, December 11, a historically powerful storm system developed in the upper south region of the United States through a nearly unprecedented conflation of meteorological factors. The storm and resulting tornadoes ripped through communities in Illinois, Tennessee, Arkansas, and especially Kentucky, leaving dozens of fatalities and billions in damage across multiple states. Although this specific extraordinary weather event cannot be definitively linked as the direct consequence of climate change given the multiple factors at play, scientists see mounting evidence that weather developments which precipitate severe weather events are becoming more common as climate change accelerates. Indeed, Federal Emergency Management Agency (FEMA) Administrator Deanne Criswell remarked on the Kentucky storms that, “[t]his is going to be our new normal…the effects that we’re seeing from climate change are the crisis of our generation.”

The disaster in Kentucky, alongside other events such as the Texas freeze in February, the Western drought, and Hurricane Ida—all in 2021—are stark reminders that a lack of climate resilience is an immediate, not future, crisis. The National Oceanic and Atmospheric Administration (NOAA) estimates that as of October 8 (over two months prior to the December tornadoes) the United States had already seen 18 extreme weather disasters in 2021 totaling over $1 billion in damages each, and 538 associated fatalities. The data suggest a rapidly worsening problem as the US saw an average of 16.2 such events per year from 2015 to 2020, versus an average of 7.1 events per year from 1980 to 2020, more than doubling in frequency.

The climate resilience crisis is also deeply embedded in questions surrounding environmental justice and equity. Although all Americans will be affected by extreme weather events and the meteorological impacts of climate change, the recent tragedy in Kentucky illustrates one of its most perverse realities: the most vulnerable and underserved communities are often at the highest risk, and are set to bear the brunt of the costs of a changing climate. Per the US Census, Mayfield, Kentucky—the community hardest hit by the December tornado outbreak—had a nearly 35 percent poverty rate with a median household income of just $32,289, far higher than the US poverty rate of 11.4 percent and lower than the median household income of $67,521, respectively. Not only will this devastated community need tremendous financial support to rebuild critical infrastructure, but the destruction wrought by this tragedy is likely to deepen poverty in the immediate term. This vicious cycle plays out worldwide: the World Bank has argued that “[c]ompared to their wealthier counterparts, poor people are more likely to live in fragile housing in disaster-prone areas, and work in sectors dangerously susceptible to extreme weather events, like farming and agriculture. They also receive much less government and community support for recovery.” Whereas wealthy communities can readily flee disaster-prone areas as the impacts of severe weather events become clearer, low-income and underserved communities may have few or no alternatives. Where federal programs to ease the costs of extreme events do exist in the US, such as the National Flood Insurance Program (NFIP), there is growing evidence that these programs favor wealthy recipients over low-income and minority ones.

The Biden administration is keenly aware of these challenges. Early in his administration, President Biden took steps to elevate resilience and adaptation to extreme weather as a cornerstone of his climate change and environmental justice agenda. One of the President’s first actions in the January 2021 Executive Order on the Climate Crisis was the creation of a new National Climate Task Force, including nearly the entire presidential cabinet, and a National Climate Advisor. Among the Task Force’s key guidelines was increasing climate resilience and delivering environmental justice for disadvantaged communities, with support from a reinvigorated White House Environmental Justice Advisory Council (WHEJAC) and a proposed “consolidated Federal geographic mapping service…that will assist Federal, State, local, and Tribal governments in climate planning and resilience activities.” In October, the release of the Biden Administration Roadmap to Build an Economy Resilient to Climate Change Impacts went even further in announcing renovations to the NFIP and the release of twenty new federal agency “climate adaptation and resilience plans to safeguard federal investments – and taxpayer dollars – from the costs of climate change”.

While each of these are positive steps, an increase in the number, frequency, and severity of extreme events suggests this work will require a whole-of-government approach. In its May 2021 recommendations, the WHEJAC noted that the Environmental Protection Agency (EPA), Department of Energy (DOE) and Department of Housing and Urban Development (HUD) should “[s]upport funding for frontline and [environmental justice] communities to organize, convene and develop climate action plans that address climate resilience, communication and prioritize potential climate impacts” given each community’s “differing levels of potential impacts and issues associated with blackouts, flooding, extreme heat, evacuation, right of return to homes by climate refugees.” This recommendation implies that one-size-fits-all solutions are deeply limited in light of the scope of the US resilience challenge, and that local, state, and regional officials must be educated on best practices for managing the impacts of climate change. This particular area is one where the broad range of resilience-focused local and regional non-profit institutions, which are already on the ground embedded in and personally engaged with underserved communities, could be instrumental in informing, directing, and implementing policymakers’ efforts. Local tribes and tribal associations could play a similar role.

An added challenge is that of scaling investment. Unlike climate mitigation projects—such as the installation of community rooftop solar programs—which can usually produce a return on investment or valuable assets for a private investor, resilience and adaptation projects may have primarily non-monetized benefits and/or high up-front costs for more limited, long-term, or uncertain fiscal returns. While some state initiatives, such as the Rhode Island Infrastructure Bank or Florida Governor Ron DeSantis’s Resilient Florida program, are designed to ease investment in local resilience and adaptation projects, these programs are necessarily limited in scale, may not be available long-term, and can be subject to shifting political and budgetary constraints. Moreover, such programs might not be implemented in ways which directly benefit the most underserved and vulnerable populations.

The recently passed bipartisan Infrastructure Investment and Jobs Act provided historic levels of federal investment, with over $50 billion in new funding directed towards physical and natural infrastructure resilience. But the amount is likely only a portion of the total needed to effectively address the resilience challenge writ large as the impacts of climate change accelerate. Moreover, addressing resilience with an eye to justice and equity means that available funding is only one step toward effective deployment. A dedicated, permanent US climate capitalization fund, or climate “bank”, could couple its resilience financing and credit services with dedicated local engagement, planning, and technical assistance with priority given to environmental justice benefits and outcomes. It is not yet clear that a sufficiently robust, bipartisan consensus is ready to take the step of establishing such a climate bank or some other, similar institution to serve as a durable fixture of a US resilience commitment. Without such a commitment, meaningful efforts to direct federal money toward the most vulnerable could be hamstrung by limited funds, political in-fighting, and the vagaries of the congressional budgetary process.

The tragedy in Kentucky makes clear that the resilience and adaptation debates are no longer theoretical.  Our nation’s most vulnerable families are already on the front lines of a worsening crisis. While mitigation and long-term decarbonization targets are undoubtedly crucial to solving the climate crisis and staving off the most catastrophic outcomes, many Americans are already dealing with the burdens of poor planning and weak investment as the consequences of climate change intensify. Increasingly, these are the people and communities with the most limited resources and means to protect themselves. As we mourn those lives which were lost to the tragic December storm, policymakers at every level of government must value and prioritize resilience, and deploy available resources for this challenge with an eye to historic inequities and injustices.

Clinton Britt is president of the Grove Climate Group.

Andrea Clabough is an associate at Goldwyn Strategies, LLC and a nonresident fellow at the Atlantic Council Global Energy Center.

Cyberattacks on our energy infrastructure: The need for a national response to a national security threat

Secretary Jeh Johnson calls for a cohesive national response to combat the growing cyber threat to our nation’s energy infrastructure. He lays out several recommendations for a path forward.

As the energy infrastructure of the future starts to spring up, ensuring its resilience to potential changes in climate will be pivotal. Modeling tools must evolve to forecast these coming challenges, and climate adaptation discussions must expand to include clean energy infrastructure.

Image: The aftermath of a neighborhood in Mayfield, Kentucky devastated by a tornado. (State Farm, Flickr, CC BY 2.0) https://creativecommons.org/licenses/by/2.0/