What do Russia’s largest bank and largest internet company have in common? Sberbank, Russia’s largest bank, is a goliath state-owned enterprise that possesses a third of the country’s total banking assets. Approximately 60 percent of Russians have Sberbank accounts. On the other hand, Russia’s largest internet company, Yandex, blends Russia’s tradition of hard computer science with Silicon Valley’s cool factor. The company is privately owned and originated as a Russian language search engine. At first glance, Sberbank and Yandex occupy two separate universes. Yet they both reflect an increasingly visible phenomenon within Russia’s Big Tech scene: the pursuit of horizontal monopolization of the internet, or ‘ecosystemization.’ This ecosystemization also stunts the country’s startup scene.

Sberbank is Russia’s largest bank and has historically prioritized traditional finance. However, during the tenure of CEO and Putin ally Herman Gref, the bank’s focus changed to include much more technology and data work. Since 2016, the bank has upped the number of ‘big data initiatives,’ such as the use of mass data in automation and digitalization, from 10 to 575. In 2017, Sberbank opened the largest data processing center in Russia at Skolkovo, the country’s flagship tech incubation hub outside Moscow. The company has also trained over 35,000 employees in AI skills and competencies at its Data Academy, a department in the bank’s corporate university. Most recently, in November 2021, Sberbank unveiled its second supercomputer, called Christofari Neo.

Yandex’ expansion within the tech world was less surprising than Sberbank’s since it was founded in 2000 as a search engine. Since then, the firm has grown to encompass much more, including ride sharing, cloud storage, mail service, maps, e-commerce, food delivery, IT education, fashion and music entertainment. Yandex is now a leader in AI: Alice, the company’s Siri equivalent, controls over 77 percent of the Russian voice assistant market. Its autonomous car project, active in Moscow and the Republic of Tatarstan, is estimated at $7bn by Morgan Stanley. In November 2021, Yandex announced a joint partnership with supermarket operator Majid Al Futtaim to launch robotic delivery services in Dubai. The firm also has an open-source machine learning library, which is used by the European Organization for Nuclear Research.

As these developments show, Sberbank and Yandex have long expanded beyond their original business models to capture more segments of the internet economy; collectively, Sberbank and Yandex are present in fourteen internet submarkets. Both firms integrate big data, machine learning and artificial intelligence into their operations. Sberbank and Yandex showcase a wider phenomenon in which Russian blue chips create all-encompassing horizontal digital ecosystems; users can perform virtually every need on a single mega-platform.

While these tech giants stretch across the digital landscape, Russia’s startup scene experiences relative hardship. As of 2021, Russia had only 274 AI startups, much fewer than China’s 1,226 and the US’s 8,161. More broadly, Russia ranks tenth for share of billion-dollar startup unicorns versus the first-ranked US and second-ranked China. Moscow is the 21st largest region for tech unicorns, right behind Jacksonville, Florida and trailing Silicon Valley, New York, Beijing and London.

This startup scarcity is surprising given Russia’s strong human capital in IT and long history of hard science expertise. In 2017, the country had more job openings for STEM graduates than the OECD average, and Russia’s market openness in digitally deliverable services trade is also higher than the OECD average. While not as plentiful as in the US or China, technology incubators in the country do exist; the most successful is Skolkovo, which invested almost $190m in tech projects in 2019.

Analysts have several explanations for this phenomenon, but two are most common. First, experts point to a ‘brain drain’ out of Russia and into America, the United Kingdom, and Israel. A 2018 survey showed that almost 60 percent of Russian youth under 30 want to work abroad. Potential talent is also attracted abroad because of the global demand for computer scientists, high pay overseas, and the adverse political climate in Russia. Second, startup funding is low. Though cash from venture capital (VC) and angel investors constitute the largest source of funding for Russian startups, VCs invested only $80m annually between 2017 and 2020, compared with the UK’s $30bn in 2021 alone. While state investment has stepped up over the years, it still is relatively insignificant; a 2020 survey revealed that over 50 percent of Russian startups surveyed have not used or do not plan to use government investment funding. In addition, most private and government funders target mature or later stage startups over new companies, further limiting new growth. Another 2020 survey showed that almost two thirds of founders flagged lack of investment or other forms of support as the most salient barriers to growth.

Russian Big Tech also plays a significant but often overlooked role in shaping market conditions for startups. Firstly, Russian Big Tech has expanded into so many fields that there is limited room for startups to gain a foothold – Sberbank and Yandex are either market players or leaders in at least fourteen internet industries. While they may not necessarily fully satisfy consumer demand, they do leave less market share for startups. Secondly, Russian Big Tech companies are more resistant to destabilization from disruptive technologies since they have largely already adopted emerging technologies. Sberbank, for instance, has used big data analytics and machine learning for over half a decade. This means that potential startups cannot rely on new technologies to gain a comparative advantage, differentiate themselves or become more efficient versus entrenched leaders. As a result, startups are less likely to succeed by ‘shaking up’ Russia’s internet marketplace.

Taken together, these dynamics highlight Russia’s unique internet landscape. In it, a handful of Big Tech players populate most corners of the internet. Meanwhile, startups face numerous challenges to success. This reality should inform policymakers and business analysts about Russia’s internet landscape. For the Kremlin, it should flash officials back to a digitized version of Russia’s oligarchic nineties, though Kremlin apparatchiks may collectively breathe a sigh of relief over state-owned Sberbank’s dominant role. In other words, stakeholders across business and policy will need to factor this reality in as Russia’s internet continues to develop.

Maxwell Kushnir is a second year Master of Science in Foreign Service student at Georgetown University and former Young Global Professional with the GeoTech Center. He is interested in emerging technology, the post-Soviet space and political strategy. 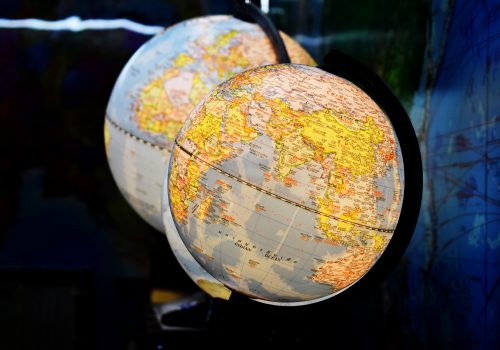 Counting the costs of technonationalism and the balkanization of cyberspace

While it started as a well-meaning effort to prevent disinformation and propagation of violent extremism, the increasing regulation began to fracture the Internet into at least three largely separate regimes, reinforcing the forces of technonationalism and protectionism.