The history of social change in Iran, from the Constitutional Revolution of 1905-1911 to the 1979 revolution and beyond, demonstrates the importance of the effective role of a modern middle class in social and political developments.

The formation of the modern middle class in Iran dates to the end of the nineteenth century and the Constitutional Revolution, which led to the establishment of the first elected parliament in the Middle East during the Qajar dynasty. Iran’s middle class continued to grow after the Qajars were replaced by the Pahlavis, a dynasty that ruled from 1925 until 1979. Iranian sociologist Hossein Bashirieh maintains that Iran’s modern middle class wasn’t only the product of modernization during the Pahlavi era, but also played a crucial role in advancing that process.

Modernization not only focused on economic development but social and political progress. Shah Mohammad Reza Pahlavi expected that the middle class would support the monarchy. However, this class became the main opponent of his regime and the instigator of his overthrow.

Following the 1979 revolution, urbanization and higher education trends continued, especially after the 1980-1988 Iran-Iraq war and during President Hashemi Rafsanjani’s two terms in the early 1990s.

The middle class played a major role in the 1997 presidential election of reformist Mohammad Khatami and the 2013 win of Hassan Rouhani; its boycott of 2005 elections conversely boosted populist Mahmoud Ahmadinejad and, in 2021, conservative Ebrahim Raisi.

Ahmadinejad sought to shift the basis of political support from the middle class to the lower classes. However, the sanctions imposed first by the 2008-2016 Barack Obama administration and, later, by the 2017-2021 Donald Trump administration—after it withdrew from the Joint Comprehensive Plan of Action (JCPOA) in 2018—delivered the biggest blow to the Iranian middle class.

Since the escalation of sanctions in 2011—which were multilateral at the time —Iran’s middle class has shrunk by at least 10 percent, from 58.4 percent of the population in 2011 to 48.8 percent in 2019. Sanctions also increased corruption that was already present and rent-seeking in Iran’s economic structures. At present, the middle class comprises about 35 percent of the population. It is expected to dwindle further due to rising inflation.

The middle class under the Ebrahim Raisi government

The 2022 budget of the Ebrahim Raisi administration shows a lack of support for the poor and middle class in Iran.

“Raisi’s first budget will put a lot of pressure on the middle class, and a large part of this class will fall into low-income deciles,” Kamran Nadri, director of the Islamic Banking Department at the Central Bank’s Monetary and Banking Research Institute said, recently, in an interview with Iranian Labour News Agency. According to Nadri, the government has failed to compensate for exchange rate changes that are highly inflationary. While salaries are expected to rise by 10 percent, inflation will be 50 percent, he predicts.

The weakening of the middle class has serious implications beyond the economy.

According to a study conducted by social media researcher Mohammad Rahbari, Twitter (one of many social media platforms that Iranians—who are predominantly middle class—have to access via circumvention tools) users paid less attention to domestic policy issues in 2021 than in 2020 and scant attention to foreign affairs. This demonstrates that domestic policies aren’t of great importance to the middle class due to frustration and disillusion with their situation.

A weaker middle class will undermine Iran’s political and social evolution. Fatemeh Maqsoodi, a member of the Iranian parliament, said in a recent speech that the middle class—which is culture-building, travels, and reads—is being squeezed between the upper and lower classes. According to her, the upper classes are becoming more conservative, under the guise of tradition, religion, and revolutionary slogans, while the lower classes are becoming more helpless and poorer.

Dr. Hashem Pesaran, a former professor at the University of Cambridge, believes that democratic values and culture will also dwindle in Iran without the middle class.

The collapse of the middle class is tied to the ebb of the reformist movement that burgeoned after the Khatami election and revived briefly under Rouhani. The reformists in power didn’t meet the needs and expectations of the middle class and didn’t take steps to consolidate political development and economic reform.

Saeed Hajjarian, a prominent Iranian reformist political strategist, has accused some reformists of being opportunists who were only concerned with gaining and staying in power. The economic deterioration following the “maximum pressure” sanctions under President Trump also undermined the reformists.

Iranian conservatives took advantage of the sanctions, blaming the Rouhani administration for the bad economic situation. Raisi and like-minded candidates didn’t mention the role of sanctions in election debates, emphasizing “neutralizing sanctions” instead of “lifting sanctions.” This implied that there was no need to revive the JCPOA to improve the country’s economy. After winning the election, the Raisi government eventually returned to nuclear negotiations; talks stalled since mid-March before indirectly resuming on June 28 between Iran and the United States in Qatar.

Ali Motahari, a former member of parliament, has accused conservatives of sparking protests in December 2017-January 2018 and November 2019 to undermine the reformists. Even Khatami has said recently that he is “disappointed with the future of the country and the political arena. I believe that the political system will not allow the reformists to engage in political activity, and it has passed us by. We must move towards community-based reform and implementation of educational activities with the aim of long-term work.”

The main problem of the modern middle class of Iran is that it has not been able to achieve sufficient wealth and power through its academic credentials. Due to the rentier structure of Iran’s economy, cultural groups don’t benefit that much even when the economic situation improves.

According to Asef Bayat, a professor at the University of Illinois, Iran suffers from a “middle class poor.’’ He believes that the class’s feeling of abandonment, resentment of corruption, and lack of confidence in the future is turning it into a source of potential opposition.

The lifestyle of the middle class is also identifiable and vulnerable to economic shocks. For example, Iranian youth, especially young women, feel deprived of their identity if they are unable to obtain certain consumer items. The middle classes are under pressure because of their inability to continue chosen lifestyles or turn their cultural capital into economic capital.

The emigration of the middle class into the Iranian diaspora due to poor economic conditions and despair about the future has also reached alarming figures, a further threat to the future of Iran’s social capital. According to the Iran Migration Observatory, 71 percent of doctors, 40 percent of nurses, and more than 70 percent of professors and graduate students are seeking to leave Iran.

Meanwhile, lower economic classes are now at the forefront of protests. This group has a greater potential for violence than the middle class.

The erosion of the middle class also undermines proponents of a balanced foreign policy that prioritizes “look to the West.”

This can be seen in the intensification of the “look to the East” policy in the Raisi government, including the emphasis on economic ties with China, and efforts to improve ties with Russia and achieve permanent membership in the Eurasian Economic Union.

The middle class seeks institutional reform to improve the quality of governance. More successful governance requires trust in government and greater citizen participation rather than boosting the interests of a small elite. Economic inequalities cause imbalance in the political system.

In conclusion, with the weakening of the middle class, the safety valve of the political system is eroding while, in foreign policy, the “look to the East” orientation will intensify. 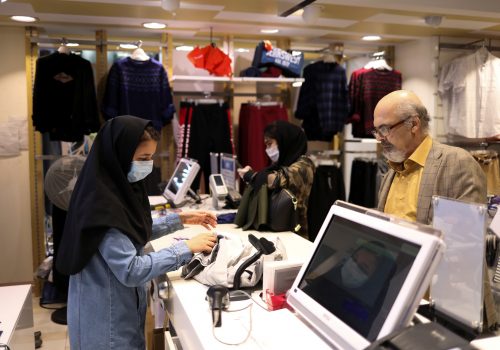 Even when the Iranian leadership has had to make strategic decisions and change its policies, the economy was only one of many considerations and not, necessarily, the primary one. 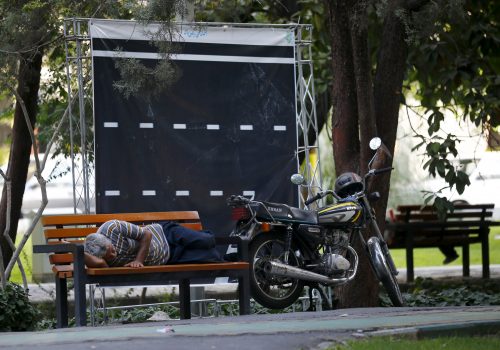 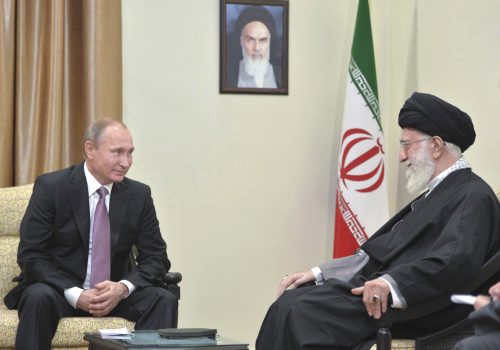 Image: An Iranian woman looks at a dress shop window while Nowruz shopping in the Ekbatan neighborhood in western Tehran on March 19, 2022. Nowruz (new day) is the Persian-language term for the day of the Iranian New Year which is also known as the Persian New Year. It begins on the spring equinox and marks the beginning of Farvardin, the first month of the Solar Hijri calendar (an Iranian calendar used officially in Iran and Afghanistan). (Photo by Morteza Nikoubazl/NurPhoto)