According to United Nations (UN) estimates, there are up to twenty thousand foreign mercenaries in Libya in addition to home-grown armed groups. In a country of roughly seven million people, that is a significant number.

So extensive has the use of foreign mercenaries been that Dr. Alia Brahimi, an expert on the region, voiced her concern that, without an adequate response from the international community, “the norm against mercenary use will be reversed and nineteenth-century practices”—before mercenary use came to be seen as widely unacceptable—“will be gradually reinstated.” Foreign mercenaries are seldom a constructive force, as evidenced by the activities of Blackwater contractors in Iraq.

Foreign mercenaries have, unsurprisingly, had gravely harmful effects in Libya, too. Ján Kubiš, the Special Envoy of the Secretary-General for Libya and Head of the UN Support Mission in Libya, argued that foreign fighters and mercenaries are solidifying the existing division in Libya. The harmful impact of foreign mercenary groups centers on two related facets. Firstly, they undermine the potential for a Libyan-led democratic process regarding the country’s future. This is largely because mercenaries prioritize foreign interests—be they economic, political, or strategic—which are all too often nefarious, to the detriment of ordinary Libyans. Their deployment almost always bodes ill for the progress of the nation to which they are deployed.

Foreign intervention is by no means a new phenomenon in Libya. In the aftermath of Libyan Leader Muammar Gaddafi’s overthrow in 2011, the rebels were aided by NATO, Qatar, France, and the United Arab Emirates, who provided support to the National Transitional Council, the de facto government for ten months between 2011 and 2012.

At the time, Qatar admitted that it sent hundreds of troops that provided training and communications support to the Libyan rebels. That was only the beginning of the foreign military problem. Since Gaddafi’s overthrow, Russia and Turkey have also taken a keen interest in the battle for the future of Libya. On the one hand, Russia backs seventy-eight-year-old renegade General Khalifa Haftar and his Libyan National Army, which holds sway in the country’s east. On the other hand, Turkey, which was invited by the UN-backed Government of National Accord (GNA) to protect Tripoli from Haftar’s military attack in April 2019, still backs the internationally-recognized Government of National Unity, based there and formed in February by the House of Representatives, Libya’s internationally-recognized parliament.

Of the twenty thousand foreign mercenaries in Libya, an estimated two thousand are from the Wagner Group, a Russian private military firm linked to Yevgeny Prigozhin, an ally of Russian President Vladimir Putin. Prigozhin was indicted by the US in a case involving Russian trolls that sought to influence the 2016 US presidential election. To grasp the extent of the evils of the Wagner Group, all one has to do is look at the accusations against the private military firm by the UN regarding its operations in the Central African Republic—highlighting just how complex the problem of foreign mercenaries are in Libya.

Progress toward elections—at present, scheduled for December—is likely to be undermined by the continued presence of foreign mercenaries. An electoral process marred by violence will only further the vicious cycle of instability in Libya. To improve the security situation in Libya, two parallel and inextricably linked processes are key: reforming the security sector by rebuilding a new army that represents the Libyan people and ensuring that it does not interfere in politics.

The best alternative to the array of foreign mercenaries and other armed groups presently operating in Libya is a unified and competent Libyan army—an institution presently divided between the two power bases in Libya: the GNA and Haftar.

After a decade of infighting and intrigue, it’s evident that the interests of the Libyan people would best be served by a unifying individual who can at least begin to heal national wounds. Following the Second Berlin Conference on Libya on June 23, Under-Secretary-General for Political and Peacebuilding Affairs, Rosemary DiCarlo, voiced the UN’s willingness to support “the implementation of a Libyan-led and Libyan-owned rights-based process on reconciliation and transitional justice.”

There is evidence of some support for restoring the 1951 constitution. This includes the backing of grassroots movements like the Return of Constitutional Legitimacy and tribal leaders and politicians—such as Libya’s former Foreign Minister Mohamed Abdulaziz—are receptive to the idea of re-establishing a constitutional monarchy.

The return to the constitution, which was abolished by Gaddafi in 1969 and replaced by the Green Book, represents hope for many Libyans who seek to return to a civil state led by civilians. Before the coup, the monarchy under the leadership of King Idris enjoyed broad support—no small feat in a country divided into 140 main tribes and a plethora of sub-tribes. After a period of such destructive division under military leaders like Colonel Gaddafi and most recently General Haftar, a unifying figure would serve the country well. Thus, the return of the Libyan monarchy is the best option for restoring stability and security.

King Idris’ grandson, Mohamed Idris (who has been in exile since 1988) was appointed head of the Royal House of Libya in 1992, before his father, the crown prince, passed away. Today, Mohamed, who is the best placed and has a legitimate claim, could play the same unifying role as his grandfather King Idris once did. In a speech to the European Parliament in 2011, he voiced his preference for the restoration of the 1951 constitution. Having been in exile for more than three decades, Mohamed would return to Libya unscathed by the political fray that has come to be marked by venality, tribalism, and instability.

If, as DiCarlo so claimed, the UN really does want to support “the implementation of a Libyan-led and Libyan-owned rights-based process on reconciliation and transitional justice,” it should throw its weight behind the restoration of the 1951 constitution as well as the removal of foreign mercenaries and forces from Libya. That, as it stands, is the best path forward for a country that has been riven by destructive internal and external division for so long.

Mustafa El Sagezli is the director of the Libyan Program for Reintegration and Development (LPRD). He has over twenty years of experience in designing strategies facilitating the de-radicalization and reintegration of ex-combatants into society. 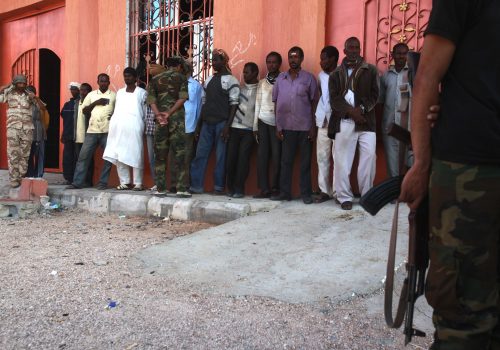 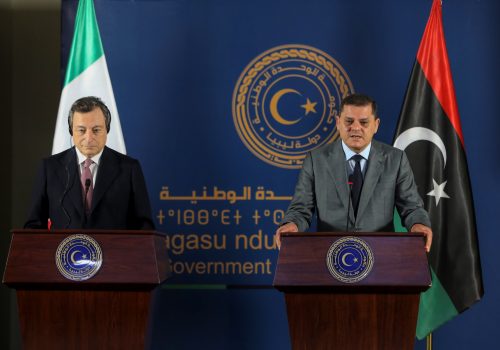 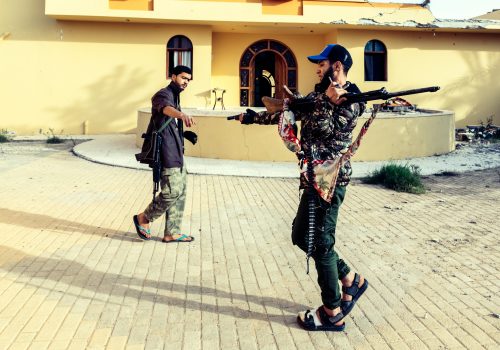 Libya’s elections are around the corner. But the country needs a hard reset.

The reality is that Libya needs a hard reset. Luckily, the answer to the current crisis can be found in the design and original sequencing of the Berlin Process.