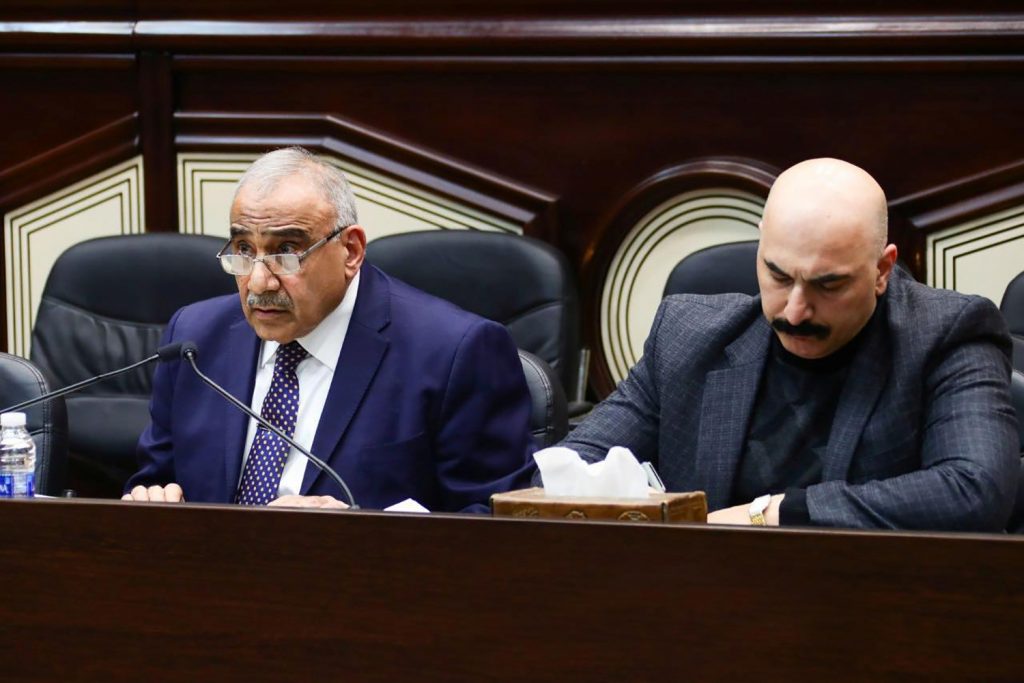 At the request of the Iraqi caretaker prime minister, Adil Abdul-Mahdi, the Iraqi parliament met on January 5 to vote on the presence of US troops on Iraqi soil. There was speculation that the parliament would not achieve a quorum to discuss this divisive issue, but in the end, a quorum was reached with over 172 members of parliament out of 329 present. Those present were overwhelmingly from the Shia religious parties. MPs from Shia groups such as Fatah, Sairoon, Hikma, Sadiqoon, and State of Law participated. The only Shia-led group that was absent was Nasr. The Kurdish parties boycotted, and only a handful of Sunni MPs were present, including the Speaker of Parliament Mohamed al-Halbousi.

In a departure from usual practice, the prime minister asked to give an opening speech. In his remarks, he reviewed the events that led to the airstrike that killed Qasem Soleimani, leader of the Iranian Quds Force, and Abu Mahdi Al Muhandis, deputy head of the Popular Mobilization Forces (PMF). The prime minister reflected on the relationship between Iraq and the United States, describing a growing rift between their priorities. He asked parliament to choose between two options: to endorse the withdrawal of all foreign troops from Iraq immediately or to re-negotiate and limit their presence, their functions, and their operations. He asked parliament to deliberate on the consequences of each choice but recommended the first option.

The vote in parliament was almost exclusively a meeting of Shia MPs and it appeared pre-planned and carefully orchestrated, with a preordained outcome. Juxtaposed against these elements, a Sunni MP from Mosul, Ahmed Al-Jarba, said that such a momentous decision should be taken by the representatives of all Iraqis, and asked the prime minister if the government could protect Iraq if international Coalition troops were withdrawn, whether Iraq will become a vassal state to its neighbor, and if the government, unaided by the Coalition, could control the resurgence of ISIS and the presence of armed groups in Sunni areas.

The prime minister did not respond. To cut the proceeding short, Mohammed Al-Ghabban from the Fatah bloc (the Badr group) gave a fiery statement in favor of voting to expel foreign troops. Not to be outdone, Nabil Al-Turfi from Muqtada Sadr’s party read a passionate statement from Sadr demanding the severing of all ties with the United States, including the closure of the embassy. The speeches were designed to stir the emotions of MPs, end debate, and preclude deliberation.

The vote to expel foreign troops was presented as a test of national “patriotism” and dignity, implying that hesitation and doubts would be unpatriotic and possibly treasonous. Fired up by these speeches, MPs stood up and chanted “Yes, yes, Iraq…out, out, America…yes, yes, Soleimani…yes, yes Muhandis.” It was an undignified and embarrassing moment for parliament, especially for the Shia Islamist parties, who disregarded the fact that many of their colleagues in parliament had boycotted the meeting.

The session was televised, except for a short segment which was leaked later, probably deliberately. In the leaked segment, Speaker al-Halbousi, addressing his colleagues, is both diplomatic and impassioned. He notes that the meeting is a “Shia meeting” and he appeals to those present as the “elder brothers, responsible for the fate of their own communities and children, as well as for those of the Sunnis, Kurds, and minorities. He stresses that such decisions must be taken in a more inclusive fashion and asks for a twenty-four or forty-eight-hour period to weigh the probable economic consequences of the decision.

In a striking disregard for the need to discuss alternatives and examine the security and economic consequences of their vote, as recommended by both the prime minister and the speaker of parliament, and without consideration for the importance of reaching a national consensus on a decision that will have significant impacts on the country, the Shia religious parties quickly passed a five-point resolution requiring the government, among other demands, to “end the presence of any foreign forces on Iraqi territory and prevent them from using Iraqi lands, water, and air for any reason.”

The speed with which these points were presented and adopted suggests that they were pre-determined. Video footage shows the MPs excitedly rising to their feet in support, their votes counted with a televised show of hands. Subsequently, some Sunni leaders decried the decision as unilateral. The Kurdish Regional Government has been placed in an awkward position, caught between the vote of the Iraqi parliament and their need for continued partnership with the Coalition to ensure their security.

There will be long-term security ramifications for Iraq if the prime minister insists on the withdrawal of US forces, which will certainly be accompanied by the withdrawal of all Coalition forces. Such a move would result in the loss of training, logistical, and technical support, and intelligence-sharing provided by the Coalition, at a time when ISIS is re-grouping and the Iraqi Security Forces are still ill-prepared to confront it alone.

There may also be severe economic consequences. A tense stand-off is unfolding between Baghdad and Washington: Abdul-Mahdi has asked the United States to send a team to negotiate the troop withdrawal while Washington insists there will be no withdrawal. US President Donald J. Trump has threatened dire economic sanctions and the seizure of Iraqi assets abroad if troops are withdrawn acrimoniously. Should such a dire scenario unfold, Iraq’s oil sector will suffer, revenues will drop, and Iraq’s already-stressed economy will collapse. Meanwhile, some PMF groups have reportedly threatened retaliation if the US military presence is not ended promptly. Iraq could return to the instability and tension seen throughout 2019, with the United States and PMF groups trading strikes.

Two other consequences are just as important if the prime minister acts upon the vote in parliament. Iraq’s external relations with the West, not only with the United States but also with Europe, will be severely strained, forcing Iraq to turn towards Russia and China, and increasing Iran’s hold on Iraq’s politics and economy. Already in response to the threat of economic sanctions, some members of parliament are proclaiming that the mammoth deal with China negotiated by the prime minister in 2019 will soon create an economic miracle in Iraq that makes US and Western economic support irrelevant.

In terms of internal politics, the fallout may be the most momentous. The fight against ISIS brought Shia, Kurds, and Sunnis together in a common purpose. Should the prime minister insist on the departure of Coalition forces, the solidarity forged during the fight against ISIS will come to an end, and the latent distrust in the country between the Shia religious parties on the one hand, and Kurds, Sunnis, and more secular Shia on the other, will resurface and threaten Iraq’s cohesiveness.

The vote in parliament has put the Kurdish Regional Government in an awkward position, and by boycotting the parliamentary session Kurdish leaders signaled their reservations. Sunni leaders have called for caution before making a decision that affects the future of all Iraqis. The Sunnis view the presence of Coalition forces as a counterbalance to Iranian and Iranian-backed influence. At least some Sunnis have reportedly raised the possibility of the creation of a Sunni region, similar to the Kurdistan region, if US forces leave. The statement of Ayatollah Sistani in Najaf on January 10, while calling for the independence of Iraq from all “foreign influences” also decried unilateral decisions enforced by a powerful segment of the political class over all others and called for a national consensus.

It is not clear where the parliamentary vote and Abdul-Mahdi’s decision will lead, and a cooling off period may help the United States and Iraq to negotiate mutually-acceptable arrangements. But the centrifugal force generated by a rushed majority vote, representing only one segment of Iraq’s complex political landscape, is a serious threat to Iraq. As Speaker al-Halbousi hinted in his appeal to his fellow parliamentarians, by forcing a unilateral vote in parliament, the Shia religious parties own this vote and will likewise own its consequences.

Rend Al-Rahim is co-founder and president of the Iraq Foundation and was formerly the Iraqi ambassador to the United States.