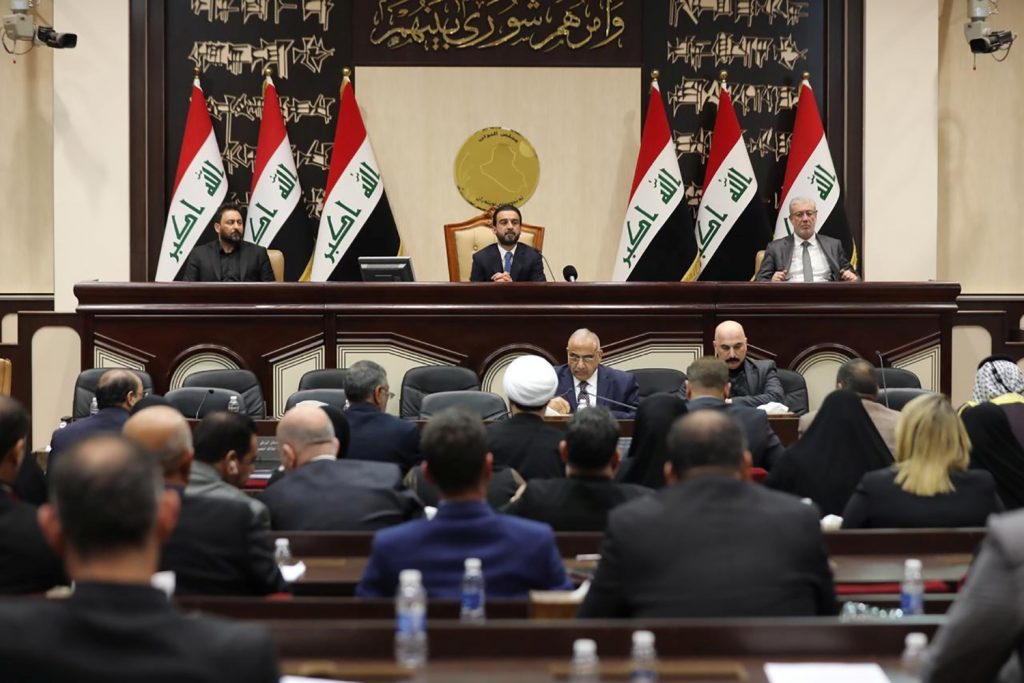 In response to the killing of Iranian General Qasem Soleimani, Iraqi lawmakers passed a measure on January 5 that calls for the removal of foreign military troops in the country and  the cancelling of an agreement that saw US forces stationed in Iraq to help fight the Islamic State of Iraq and al-Sham (ISIS).

Iraqi parliamentarians were angered by the assassination of Soleimani outside Baghdad International Airport on January 3, as well as violent protests outside the US embassy in Baghdad and growing clashes between US forces and Iranian-backed paramilitary Popular Mobilization Units (PMF) within Iraq. Before parliament voted on the measure, Iraqi Prime Minister Adil Abdul-Mahdi advocated for the withdrawal of US forces and claimed Soleimani was carrying a response to a de-escalation initiative from Saudi Arabia at the time he was killed.

Although the resolution passed, many Kurdish and Sunni legislators boycotted the session in opposition to the move, which was primarily supported by Shiite parties. Sarkawt Shams, a member of the Iraqi parliament, downplayed the importance of the resolution itself as “the decision simply asks [the] Government to do whatever it should do to limit and gradually end foreign forces in Iraq.”

We still don’t know if the US strike against Soleimani will in the end spark an escalatory cycle toward a wider military conflict or whether leaders in both Tehran and Washington will yet be able to prevent that outcome. But the collateral damage to wider US interests in the region is already becoming apparent with the move by Baghdad that could eventually legally require the removal of US forces from Iraq.

It would abandon Iraq to Iranian influence just as a new prime minister must be chosen, and thus give Soleimani the kind of posthumous victory the the Trump administration previously denied him when he was alive. It would raise serious questions about the viability of maintaining the US diplomatic presence in the country, almost certainly at present levels, and would likely not allow for US commercial presence in many parts of the country. It wasn’t long ago when one of the core organizing principles for the Trump administration’s policies in Iraq was to promote American business and the awarding of Iraqi government contracts to American companies.

Our intelligence capacities in Iraq that track terrorist threats from both the Islamic State and Iran depend directly on the existing US diplomatic and military presence, and so they too would be sharply diminished. This, of course, would cut directly against the stated Trump administration priority of combatting these threats. Moreover, the Trump administration just completed a highly prominent and heavily criticized restructuring of the U.S. military presence in Syria.  Since that presence both logistically and legally depends on our presence in Iraq, the future of the new Syria mission would also once again likely need to be reconsidered. Finally, more generally across the Middle East, such an outcome would reinforce the growing perception that the United States is no longer a reliable partner and that wider US withdrawal from the region is only a matter of time. This is a message that Russia is actively advancing, that the US military and diplomats have been trying to deny, and an outcome for which China is actively positioning itself.

“With an immediate, very astute, and highly professional diplomatic approach, it still might be possible to limit the impact of this action by the Iraqi parliament.  Most immediately we should work to extend the coming negotiations about the timeline for withdrawal as long as possible, and then try to extend the resulting timeline even longer.  Other options might include creating a “dual key” of approval by a designated Iraqi official even in the cases of the defense of US forces from imminent attack, maintaining military training under State Department authorities, and establishing specified exceptions for our continued non-combat enabling missions under Defense Department authorities to advise, assist and accompany the Kurds in the north and the Iraqi Counterterrorism Service against the Islamic State and Al Qaeda.  Other exceptions might similarly be made for certain European (and potentially other Arab) special operations forces to take up some of the training and counterterrorism partnering missions that we would be forced to abandon.

“Unfortunately, it will be especially challenging for the Trump administration to be able to successfully pull off such a diplomatic negotiation in the current context. The US diplomatic approach to Iraq recently has been to force them to make a choice between the United States and Iran, something that our best friends in Baghdad have long worked to avoid and strongly advised us not to advocate.

“Given that, the best way to maximize the probability of a diplomatic success in Iraq at this point is to quickly deescalate the situation with Iran.  Along those lines, the US should work with the other members of the United Nations Security Council to pass a resolution calling for a “cease fire” and planning a diplomatic conference in the coming weeks under UN auspices. While nobody should have any confidence that such a conference would actually resolve any of the underlying issues, the mere existence of such a resolution and the active diplomatic planning for such a conference might provide the necessary excuse for leaders in Iran who are currently debating their retaliation to at least delay such an action until after the conference. And such a delay could potentially allow the time necessary to encourage Iran to design their inevitable retaliation in a manner intentionally intended not to be further escalatory and—just as important—that this would then perceived as such by the Trump administration.”

Abbas Kadhim, director of the Iraq Initiative at the Atlantic Council:

“This vote is very significant for both symbolism and substance. Once again, as they did in 2011, the Iraqis choose their sovereignty over national interests. The extremely important US military presence in Iraq to train Iraqis and combat terrorism was rejected because it was used for other purposes, and in violation of the Iraqi Constitution and the US-Iraqi Strategic Framework Agreement. If this vote tells us anything, it confirms that if Iraqis are cornered and forced to choose between the United States and Iran, they will find it safer to choose Iran. The damage of the recent escalation is irreversible, but there may still be an opportunity to salvage the existence of normal diplomatic relations and prevent a complete loss of Iraq. Military and business relations are completely lost for the foreseeable future. According to the US-Iraqi agreements, it can take up to a year to fully dissolve the engagement, but given the circumstances, the process will be significantly quicker, if not immediate.”

“The vote reflects the mood of Iraqi leadership, but it should be noted that in an open vote like this, any Shia legislator who voted to keep the United States in Iraq would be placing themselves in mortal danger. A secret vote might have yielded a different outcome.”

Matthew Kroenig, deputy director of the Scowcroft Center for Strategy and Security:

“Tehran is mourning the death of Quds Force Commander Qasem Soleimani, but the reality is that his death will not be in vain particularly if it accomplishes what Iran and its proxies had set out to do all along: Push the United States out of Iraq.

“Having that been said, US President Donald J. Trump will spin this into a political win. One of Trump’s campaign promises was to pull US troops out of Iraq, and he will likely make it seem as though it was on his own accord.”

“The exact terms of today’s resolution in the Iraqi parliament are important, more so than Western headlines that focus only on the future of US and Coalition forces in Iraq. Parliament’s resolution, which is not binding – though it has Prime Minister Adil Abdul-Mahdi’s support – obliges the government to (1) end the 2014 request for assistance to the US-led Coalition to fight ISIS, and (2) end the presence of any “foreign” forces in Iraq, including the use of Iraqi airspace. (3) It calls for limiting arms to the Iraqi state, that is, no autonomous militias. Action now shifts to Iraq’s executive branch.

“In other words, this is the beginning of a multi-sided negotiation—not the end of it.

“This makes it all the more important for the Trump administration to carry out a well-thought-out strategy to engage not just with Baghdad, but also with the leaders of the Iraqi Kurdistan Region and the United States’ allies in the region and in Europe. If the US reaction is an emotional decision to pull out or treat Baghdad as an Iranian ally, Qasem Soleimani will have a posthumous victory.

“If the Iraqi government is genuinely able to put Iranian-backed militias under government control and end Iran’s support and influence for them, and to prevent Islamic Revolutionary Guard Corps (IRGC) Quds Force personnel from operating in Iraq, that would be quite an achievement. It would partially—only partially—offset what the parliament said about US forces. There are good reasons to believe Iran will use every trick in the book to stop this from happening. The United States needs to focus on stopping Iran from winning on this vital point.

“The next few months will tell if the cuts in Embassy Baghdad staffing hurt the United States’ ability to persuade the Iraqi government and people that we’re prepared to work constructively.

“For the Iraqi people, the stakes are higher than many realize. If the Trump administration pulls out, it may start treating Baghdad as an Iranian ally. Iraq would be isolated and, in short order, likely face US sanctions similar to Iran. The people of Iraqi Kurdistan and western Iraq would then have to decide whether this is what they want for their future. Modern Iraq has never faced a more perilous moment.”

“The vote by the Iraqi parliament should come as no surprise. But the devil is in the details. The Iraqi government has frequently made the distinction between US forces engaged in combat operations, advisers, and those affiliated with security cooperation and foreign military sales. After the initial outrage subsides, it will be interesting to see if any of those are left. That will tell us what potential is left in US-Iraq security relations.”

Questions and certainties in the killing of Qasem Soleimani