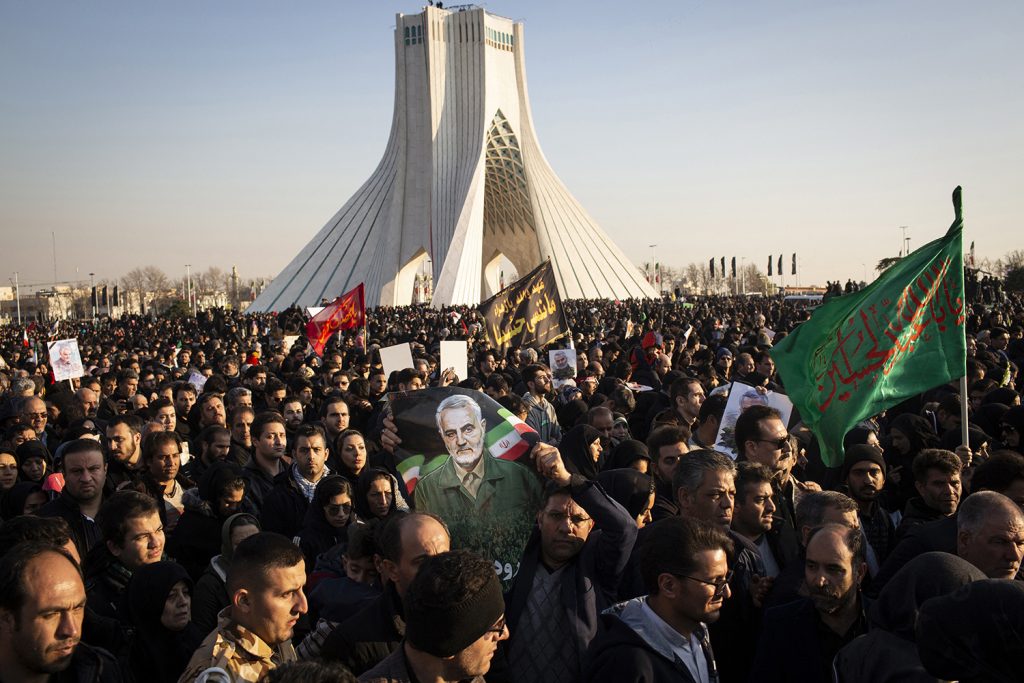 Abu Dhabi – One must travel to the Middle East to better sense the earthquake set off by the US drone strike that killed Iran’s legendary General Qassem Soleimani a week ago. In this glittering Emirati capital, only some 200 miles from the Iranian border, no one doubts that aftershocks are coming.

The only question is of what nature and magnitude.

After all, this is a place that knows the power of Mideast leaders to build, in the case of their Crown Prince Mohammed bin Zayed al-Nahyan and his father. Or to destroy, as Emiratis have witnessed across much of the rest of their neighborhood for all too long. Talk to top officials here, and they feel that those who don’t know their region underestimate the enormity of the Soleimani killing.

In one side conversation this weekend during the fourth annual Atlantic Council Global Energy Forum, a Mideast official who tracks such matters shared three reasons why Soleimani may be even more irreplaceable than the Iranian Supreme Leader himself, Ayatollah Ali Khameini, as the linchpin and architect of his extraterritorial visions.

First, Soleimani built and commanded to his dying day the 200,000-strong Quds (Jerusalem) Force. This Shi’a paramilitary force – with the goal of exporting Iran’s revolution and ultimately “liberating” Palestine from Israel – was created immediately after the 1979 revolution. However, it gained its real prominence and traction when Soleimani, the son of a blind peasant, took over leadership in 1998.

Second, he built out and directed Iran’s global network of proxies, spies and terrorists, a position underscored by the fact that the US strike also killed Abu Mahdi al-Muhandis, the deputy commander of the Iranian-backed Iraqi militias known as the Popular Mobilization Force.

“Iran’s current ascendency in the Middle East,” writes Kara Aarabi in Foreign Policy, “is inextricably linked to the Iranian general and his willingness to spill blood. Over the course of two decades, Soleimani nurtured Shiite militancy from Baghdad to Beirut and strategized terrorism with a degree of finesse that bin Laden and Baghdadi could only ever have dreamt of.”

Third, Soleimani’s closeness to the Supreme Leader was matchless, allowing him to reach Iran’s leader and quickly gain his quick, personal approval for even the most ambitious and risky of operations. As such, Soleimani became the linchpin and architect of Iran’s extraterritorial activities, from Thailand to Venezuela, and from Bulgaria to Palestine.

Mideast official argued to me that he was indeed the Supreme Leader’s son-in-law, having married his daughter.  He explained that the marriage followed the relationship between the two men and resulted in an even deeper familial bond and loyalty.

My best efforts failed at confirming this report of Soleimani’s marriage to the Supreme Leader’s daughter, which would have been big news. Instead, it seems this unconfirmed report has grown out of speculation within Iran, because little else would explain his unique closeness to the legendarily inaccessible Ayatollah.  Soleimani’s Wikipedia biography merely says he is married and has four daughters – and that the name of his wife is unknown.

What seems to be clear is that Soleimani’s loss has been not only an operational shock to the Iranian system but also a personal shock to its Supreme Leader, accentuated by his public weeping at the Soleimani funeral.

What’s beyond dispute is that Soleimani had a heroic reputation like no other individual in Iran, played a role unlike any other in advancing the revolution externally, and owned unmatched access to the country’s famously inaccessible leader.  While Mohammed Zarif is the titular foreign minister, his job is more representational while Soleimani served as the true executor of external affairs.

Another Mideast official argues that if the aftermath is managed correctly by US leaders with their Arab and European allies – avoiding military confrontation but maintaining pressure – it could speed the further erosion of an already aging Iranian revolution. His argument is that the revolution was already declining in the toxic stew of corruption, misspent resources, and the economic squeeze of American sanctions.

One outcome is certain. Soleimani considered himself untouchable, thus traveling freely and beside one of his top Iraqi lieutenants, never imagining that the United States would dare such an action against him. Many thousands of young Iranians and Iranian proxies have wanted to be just like him, and many have become his lieutenants, also confident that they knew the risks.

That calculus has changed overnight. Who knows when the next drone might strike, particularly those who don’t enjoy Soleimani’s presumed protection of official government status.

For now, Emirati leaders have been heartened by the de-escalatory moves of both President Trump and the Iranian leadership late this week. However, they sense more of a pause than a finish. Having seen how precisely Iran could strike Saudi oil fields back in September, they are confident Tehran could have done much more damage this week – including taking American lives.

One is that Iran is so economically weak and internally shaken by the Soleimani killing that it took the most cautious course, allowing the Supreme Leader to save face with his people without risking losing his own head to the Americans through reckless escalation.

The second conclusion I heard was that the Iranian regime is much stronger and more resilient than outsiders understand, and that it is keeping its eyes on the grand prize – the continued spread of its revolution. According to this version, the Iranians are too wise and focused on the future to be pulled into an American trap that would undermine the Utopian, revolutionary dream Soleimani embodied.

Mideast officials and experts may have confidence when they speak of Soleimani and his significance, but that vanishes when they shift their gaze to President Trump.

Trump has delivered America’s boldest stroke in the Mideast since the 2003 removal of Saddam Hussein, without sharing with his allies here any larger strategy beyond that. Even as Soleimani’s death sinks in, Trump’s design for the days ahead remains elusive.

Must reads from a world in transition

This week’s must-read, which is being circulated widely in Abu Dhabi, is Robert Worth’s profile of UAE Crown Prince Mohammed bin Zayed al-Nahyan in the New York Times Magazine. It is unprecedented in its detail and Worth’s access – a long-form narrative from which historians will be drawing for years to come.

Other top reads include Evan Osnos’ rich look at Sino-US relations since 1784 in the New Yorker, Der Spiegel’s reflection on the reasons behind modern Germany’s declining international influence, Peggy Noonan’s warning to President Trump to “cool it” on Iran, and a tribute to Sultan Qaboos of Oman, the Middle East’s longest serving ruler, who passed away this weekend.

The Future of America’s Contests with China

With the Trump administration embarking on new talks to better steer US-Chinese relations, The New Yorker’s Evan Osnos delivers must reading on the history of the relationship since 1784.

It begins with the first American merchant landing in China to trade ginseng for tea, reminds us of Henry Kissinger’s secret negotiations and Richard Nixon’s “engagement” strategy, and lands with Donald Trump’s current trade war and “decoupling” policy.

“To a degree still difficult for outsiders to absorb,” writes Osnos. “China is preparing to shape the twenty-first century, much as the U.S. shaped the twentieth. Its government is deciding which features of the global status quo to preserve and which to reject, not only in business, culture, and politics but also in such basic values as human rights, free speech, and privacy.” Read More →

Germany Searches for Its Role in the World

The story in Europe of the most underestimated importance is the future of Germany. The country’s reluctance to lead and failure of vision for the future is likely more perilous to Europe’s future than Brexit or any other single issue.

“When it comes to foreign policy, the German government has shown itself to be paralyzed,” write the Der Spiegel reporters, tracking Germany’s diminishing role on the global stage over the last decade as a perception shared by all its major partners.

“The world is waiting for Germany,” they write. “The country’s partners and other actors on the geopolitical stage alike are waiting for the long twilight of the Merkel era to end and for Germany to find itself again.” Read More →

Soleimani Had it Coming, but Don’t Get Cocky

Peggy Noonan penned a column worth reading on why President Trump’s short speech this week on Iran was far less conciliatory that some thought. She concludes he’s still turning up the heat on Iran, and that he should cool it before he reunites the people with their authoritarian regime.

“I think I discerned an attitude shift,” she writes. “Washington’s previous longtime common wisdom has held that Iran is split and divided; the young, moderate and liberal, hate their government and its repressions and despise the mullahs. So we should let this internal resistance spread, rise and deepen as economic sanctions make life harder and the government’s position less secure. Do nothing to get in the way, to ruffle things or encourage Iranians’ love of country to transfer to loyalty to government. Play it cool.”

Instead, she writes, “from what I heard, Mr. Trump thinks: No, don’t be cool. Heighten the tension between the people and their government. Make them decide. Force the crisis.” Read More →

The New York Times’ Ben Hubbard produces the best obituary I found on the Middle East’s longest serving ruler, rich with insight and geopolitical context about a man who “gave Oman a role akin to a Middle Eastern Switzerland, where foes battling each other could meet for quiet talks.”

Writes Hubbard, “in a region rife with sectarianism, political divides and foreign interference, the soft-spoken, diminutive Qaboos championed a foreign policy of independence and nonalignment. He became a rare leader who maintained ties with a wide range of powers that hated one another, including Iran, Israel, the United States, Saudi Arabia and the Houthi rebels in Yemen.” Read More →

Robert Worth delivers a must-read, unprecedented profile of the Middle East’s most intriguing, modern, and unusually powerful leaders, known by his admirers here in Abu Dhabi and elsewhere simply as M.B.Z.

Read every word (and there are 9091 of them), as this is likely to become a reference from which historians will draw for many years to come. Worth tracks the story of a young man who “was under the sway of Islamist thinking” to the de facto ruler of the United Arab Emirates “who has put many of his resources into what could be called a counterjihad, and they are formidable.”

Writes Worth, reflecting on his increased importance after Soleimani’s killing: “M.B.Z. remains a rare figure in the Middle East: a shrewd, secular leaning leader with a blueprint of sorts for the region’s future and the resources to implement it. For all his flaws, the alternatives look increasingly grim.” Read More →

Person of the week

Shaping the global future together: the Council’s “Top fifteen hits” of 2019

We look back at the Atlantic Council’s top work of 2019 galvanizing US leadership alongside partners and allies to tackle the most pressing challenges confronting our nation and our world.