In September, Israeli Foreign Minister Yair Lapid made the first-ever visit to Bahrain by a high-ranking Israeli official. He also visited a warship belonging to the US Navy’s Fifth Fleet. At the time, an anonymous Israeli official noted that Jerusalem and Manama are looking to cooperate in response to the growing threat of Iranian drone attacks that “disturb everyone.”

By “everyone,” the Israeli source was most likely also conveying the concerns of Bahrain’s neighbor, Saudi Arabia. Going largely unnoticed, the small but sophisticated Iranian-made armed drones have undercut the security balance in the Gulf region and the Arabian Peninsula over the past few years, ushering in a novel asymmetrical menace.

Inception in the Yemen War

Ever since the Saudi-led military campaign was launched in Yemen in 2015 against the Shia Houthi rebel movement that had risen on Saudi Arabia’s doorstep, the kingdom’s territory increasingly became a target for airborne retaliation attacks carried out by the Houthis, using rockets and ballistic missiles provided by Tehran (which saw an opportunity in the Saudi-Houthi clash to deepen its grip in Yemen). At least since 2017, the Houthis have begun to also fire explosive-laden drones that are assembled with components shipped from Iran and near-identical to the Ababil-T drones used by Iran and Lebanese militant group Hezbollah. These persistent strikes have often targeted civilian areas and critical infrastructures. Yet, for the most part, they received little media attention and weak condemnations, if any, from the international community, which shunned Riyadh in light of its intervention in Yemen, which the United Nations considers amount to war crimes.

As the war dragged on, it became evident that, while Saudi Arabia is ordinarily capable of intercepting the Houthis’ missiles using United States-made Patriot batteries and other Western-made air defense systems that protect its sensitive sites, the low-altitude drones appear more difficult to curb. Saudi air defense is helpless against massive swarms of them flying at once, and there are not many off-the-shelf devices capable of handling such barrages. Accordingly, Tehran seems to have increased its investments in drones in Yemen.

Over the years, footage of Houthi strikes and claims made by the group indicated that they acquired and used Iranian-made Sammad-2 and Sammad-3 drones, whose range exceeded hundreds of miles. Moreover, last January, satellite images suggested the deployment of Iranian Shahed-136 loitering suicide drones (with a range of 1,200 miles) in Yemen, thus, having the ability to cover the entire Arabian Peninsula and its surrounding seas. There is no evidence of the use of these advanced drones so far, but given Iran’s clout over the Houthis, their position is practically allowing Tehran to conduct drone attacks against targets far away in the Red Sea, Gulf of Aden, and strategic Bab-al-Mandab Strait, while utilizing the Houthis as a proxy that provides deniability.

The rules of the game changed in September 2019. Amid mounting US-Iran tensions stirred by the Donald Trump administration’s “maximum pressure” policy—prompted by the US withdrawal from the 2015 Joint Comprehensive Plan of Action (JCPOA) and re-imposition of sanctions—Iran reportedly fired volleys of at least twenty drones and dozens of cruise missiles toward eastern Saudi Arabia, directly at the Aramco refineries in Abqaiq and Khurais, the world’s largest oil processing facilities. The audacious attacks—presumably spearheaded by Iranian-made IRN-05 drones, whose maximum range is about 550 miles—prompted the biggest disruption in the history of global oil production overnight. Although Houthis in Yemen claimed to carry out the attack—allowing Iran to deny involvement—the US revealed that the Islamic Revolutionary Guard Corps launched it from Iran’s soil. Perhaps, as meaningful as the attack itself, was the blatant lack of US response and the Saudis’ demonstrated incompetence to strike back despite spending more than $10 billion annually on top-tier US military hardware during the war in Yemen.

Getting away without a penalty opened the floodgates for Iran to continue striking Saudi Arabia not only through the Houthis in Yemen, but, since 2019, also from Iraq, making use of its Iraqi Shia militias. Groups like Kata’ib Hezbollah have been outfitted over the past years with varied Iranian drones, including equivalences of the long-range Sammad-2 and Sammad-3 and the shorter-range Mohajer-6. In February, three such drones from Iraq brazenly crashed inside the complex of King Salman’s palace in Riyadh. A month later, in March, the world’s largest oil terminal in Ras Tanura port in Saudi Arabia’s eastern coast was pounded by multiple drones. The attack came from the north, and it was not clear whether it emanated from Iran or Iraq. Practically speaking, it did not even matter. The Houthis falsely claimed responsibility for the attack, thereby conveniently presenting it as part of the Yemen War, knowing that, due to the harsh international criticism of the Saudi involvement, events related to the war will not draw empathy for Riyadh.

Two years since the attack on the Aramco facilities, it is evident more than ever that the menace Iran’s drones pose to Saudi Arabia is not a temporary implication of the Yemen War, as believed at first, but one that is here to stay as a linchpin in the regional attack and deterrence capabilities of the Islamic Republic. This is a far-reaching development, as it has granted Tehran a new and efficient way to coerce both its neighbors and the West by impairing, whenever it wishes, maritime pathways and the global energy market. The low budget, home-grown, and easy-to-operate drones somewhat offset Iran’s inferior air capabilities, which heavily relies on about four dozen pre-revolution F-14s, against US troops in the Gulf.

While the manufacturing cost and the precise specification of the drones in Iran’s arsenal are unclear, Tehran fields more armed drones than countries like the United Kingdom or Russia, with a way lower military budget of $15-20 billion annually. From Saudi Arabia’s standpoint, the exposure of its petroleum plants to arbitrary airstrikes could inhibit the partial privatization of the national oil giant Aramco, which is an essential pillar of Saudi Vision 2030—the pretentious strategic framework, led by Crown Prince Mohammed bin Salman, to diversify the kingdom’s economy and reduce its dependence on oil by the end of the decade.

By now, it is also apparent that the US is not keen to throw its weight behind backing its Saudi ally from Iran’s direct and proxy drones (at the same time that US bases in Iraq and Syria are subjected to consistent drones strikes by Iran-backed Shia militias). In February, the Joe Biden administration withdrew its support from the Saudi campaign in Yemen and opened a direct negotiation channel with the Houthis, thereby coming to terms with the militia’s dominant role in post-war Yemen. Moreover, the US is also gradually pulling its forces out of Iraq—facilitating Iran-backed militias’ build-up and activities—and is deeply invested in returning to the JCPOA, which reduces Washington’sleeway against Iran’s regional activities.

Underlining its indifference to Saudi Arabia’s aerial vulnerability, in June, the US announced a sharp reduction of its missile systems and radars in the kingdom and across the Gulf (aiming to redeploy them to other fronts to face China). Along this line, the failure of the US—together with the United Kingdom—to honor its pledge to respond to a fatal Iranian drone strike in July on an Israeli-owned tanker in the Gulf of Oman, which killed a British and Romanian national, speaks volumes of Washington’s insufficient acknowledgment that Iranian drones pose a regionwide and pressing peril.

As implied earlier, Israel could be an ideal partner for Saudi Arabia in the face of looming Iranian drones that endanger both countries, as Israel has already experienced an infiltration of Iranian-made loitering drones by Hezbollah and other Shia militias from Lebanon and Syria. The same Israeli official who spoke during the visit to Bahrain stated that “everyone knows very well what sort of capabilities we are bringing to the table,” seemingly alluding to the tried-and-tested Iron Dome air defense system or to Israeli laser-based interception products that are under development.

Nevertheless, it is unlikely that the Saudi leadership can afford to adopt the system that is synonymous with Israel at the moment, and the deployment of the Iron Dome solely in Bahrain—Riyadh’s close ally that did establish relations with Israel as part of the historic Abraham Accords in 2020—would not be sufficient. In any case, setting up an effective regional air defense umbrella is subject to the whims of the US, whose forces are deployed around the Arabian Peninsula. Indeed, at the beginning of this year, Israel greenlighted the introduction of the Iron Dome at US bases in Saudi Arabia and the Gulf. However, following the US’ decision to reduce its air defense batteries in the region in June, it is unclear if this deployment will take place.

There is also a Saudi plan to develop a counter-drones system. In 2020, the national military industries announced that a home-grown radar and missile interception system is under development “with international partners.” However, manufacturing such a device requires particular technical knowledge and may take many years, which Riyadh cannot afford in the current situation.

At the end of the day, the Saudi leadership acknowledges that, apart from its defense strategies, it has few options other than to mend bridges with the Iranian government, which it had ended diplomatic ties with since 2016, to reduce tensions between the two regional rivals. This path was manifested in a further round of talks between the countries, held in Baghdad in tandem with the Israeli visit and muscle-flexing in Bahrain. Addressing this meeting, the Saudi Foreign Minister Faisal bin Farhan stated that his country is “serious about the talks” and wishes to “find a way to stabilize the region,” expressing the kingdom’s desire to distance itself from the drone warfare it is currently incapable of fighting.

Ilan Zalayat is a PhD student in the Department of Islamic and Middle Eastern Studies in the Hebrew University of Jerusalem, and acted as an intelligence analyst at security consulting firms. Follow him on Twitter: @ilanzalayat. 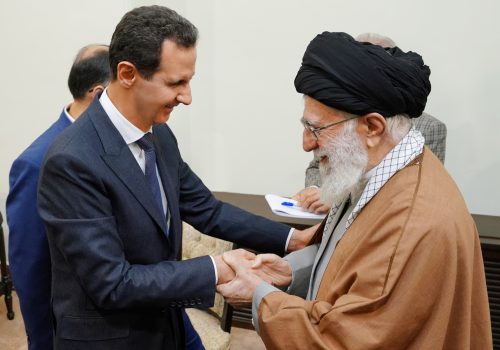 Neither the Obama administration’s successful negotiation of the 2015 multilateral Iran nuclear agreement nor the Trump administration’s unilateral withdrawal from the JCPOA and re-imposition of sanctions appear to have dented or retarded Iran’s advancement of its regional goals. 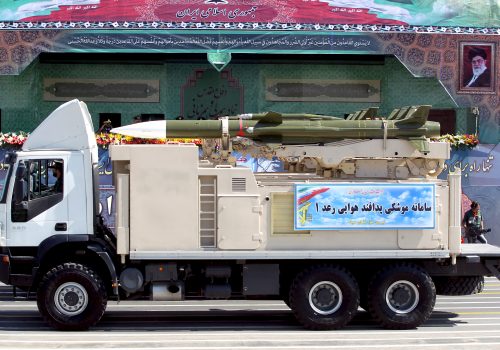 From Tehran’s point of view, a strong emphasis on air attack tools is understandable and reasonable. However, it is important not to overestimate the impact these means can deliver. 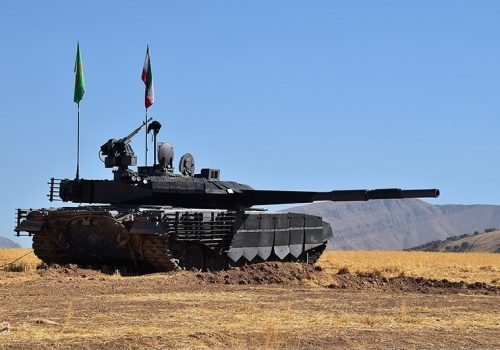 While, in many countries, defense companies are private, they are state-owned in Iran. Because of the Islamic Republic’s long pariah status, interaction with the outside world has been limited.