A year after the October 2021 elections, the Iraqi Council of Representatives finally ended the stalemate and confirmed the country’s fifth president. The election of Abdul Latif Rashid removed the complex constitutional obstacle prior to government formation. The intra-Kurdish competition for the Iraqi presidency was the de jure reason for the one-year delay to finalize the process of what was supposed to be an early election to swiftly replace Adel Abdul Mahdi’s government. In real time, the new government—which was seated after the natural end of its predecessor’s term—may be an interim government, as another early election seems to be the only way to restore the political equilibrium in Baghdad.

The confirmation of Mohamed Shia al-Sudani as prime minister is a glimpse of hope, giving Iraq a chance to move forward on many pressing fronts. To be sure, there have been many objections to certain choices for his cabinet—a reality Iraqi governments have previously faced. Yet no one has questioned Sudani’s competence, integrity, or fitness for the position.

Besides his adequate qualities, Sudani is fortunate to receive a peaceful Iraq in good financial standing and with excellent regional and international prestige. These healthy conditions, along with high oil prices, can help the new prime minister in facing many inherited challenges, from the frustrating level of corruption to the lack of adequate services and good governance—not to mention internal political disputes and the looming crises of rapid climate deterioration, acute water scarcity, and the continued pressures from key regional actors, particularly Iran and Turkey.

From his first day in office on October 28, Prime Minister Sudani was greeted with unrealistically high expectations. He must not capitulate to these unrealistic demands and exaggerate his promises only to end up being judged as an underachiever. He must set the stage for exactly the opposite: make realistically adequate promises, lead his cabinet to work hard, and share the responsibility with the Council of Representatives to meet or, hopefully, exceed these promises.

Under the current conditions in Iraq, people will appreciate small successes that significantly improve their daily lives more than elaborate plans that remain unfinished by the time a new government takes office and, all too often, abandons them altogether. Setting priorities and facing challenges in a practical order is an essential path to success. But this must also be done in a multi-level fashion across the government. Much of the past failure occurred because the government often focused on one major challenge and neglected everything else. As praiseworthy as it was to defeat the Islamic State of Iraq and al-Sham (ISIS) and make significant gains in Iraq’s foreign relations, those achievements could not constitute an excuse for the abysmal performance by some ministries, which made no progress in the industry, housing, education, or health sectors, to mention only a few examples.

The first domestic priority for Prime Minister Sudani must be a measurable plan to heal the nation. The past three years—particularly since October 2021—have witnessed an alarming deterioration in Iraqi social cohesion. Iraqi political factions have had no limits when it comes to othering and dehumanizing each other, often resorting to venomous language and hate speech. Mere disagreements on ordinary political issues have often led to interlocutors being characterized as mercenaries, someone disloyal to Iraq, or foreign agents. It has become dangerously unfathomable to many Iraqis that someone can both have a different view than the one they advance and remain a patriot.

If Iraq is to avoid slipping into the abyss of socially- and politically-destructive narratives, the new government must work diligently to promote inclusiveness, tolerance, and national harmony. Trust building is an essential element of success that must be built in a top-down and bottom-up fashion, with the Iraqi political elite taking initiative and leading by example.

Iraqi foreign policy is another area that needs special attention from the new government. Successive Iraqi governments have accomplished measurable progress in transforming Iraq from a marginalized state to a crucial regional actor in the past two decades. A neutral foreign policy, with constructive regional engagement, has given Iraq some important political, economic, and security dividends. More of the same policy will take Iraq farther on the path to regional and international integration. That said, Iraq must not shy away from standing strong to malign foreign interference, ideally by deploying all the tools of diplomacy and international law. At the same time, Iraq needs to work with its neighbors to ensure that no Iraqi territories are used as a passage or a refuge for forces that threaten their security.

This is important to eliminate any pretext that they use to keep troops illegally in Iraq or conduct military operations that claim innocent Iraqi lives, as multiple Turkish and Iranian military actions have done in recent months. This cooperation needs to be integrated with other Iraqi and multi-lateral national security interests for these nations—climate challenges and the fair sharing of water resources prominent among them. Iraq must find a solution to its climate and water problems before their impact becomes irreversible.

A final pressing priority is the economy. The Iraqi government must work with the Council of Representatives to make the necessary reforms that incentivize investment and activate many paralyzed economic sectors while oil prices remain high. The state will fall under its own weight if it continues to be the only place of employment Iraqis look to. The country does not need—and cannot survive—endless waves of unproductive public employees who join the bureaucracy instead of making real contributions to the economy in sectors where their skills and labor can make a difference. To that end, Iraq needs to recalibrate its education policies at all levels and prepare a workforce ready for such jobs in the coming decades. Past education policies and economic planning have failed to ensure economic security. Therefore, it is high time to reconsider the country’s trajectory in these fields.

While cautious optimism is essential to run public affairs and conduct policy, it is not an adequate replacement for a good strategy. Post-2003 Iraq has shown a gross lack of strategy on many governance fronts. It’s never too late to rectify this unforgivable deficiency. 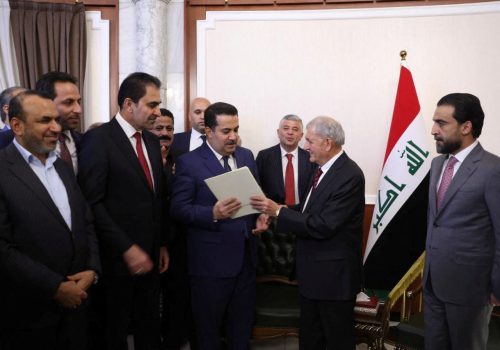 Iraq has a new government. The United States would benefit from broad engagement with all Iraqi stakeholders.

Such an approach will typically yield modest results, but these results can accumulate and place the United States in a better position. 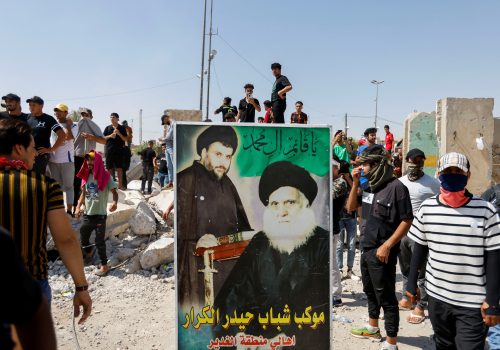 Experts react: Muqtada al-Sadr withdraws from politics. What’s next for Iraq amid a deep political rupture?

Atlantic Council experts react to the news of Muqtada aSadr’s resignation and offer their thoughts on how the international community will deal with the conflict moving forward. 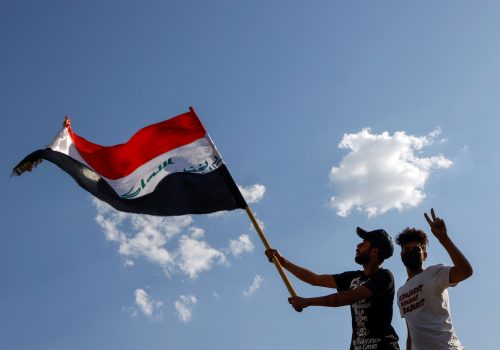 Turmoil and transition: Iraq twenty years after the invasion

An Atlantic Council conference on Iraq's security, environment, economy, and democratic institutions brought together high-level officials from across the region and the United States to explore innovative solutions.