After more than a decade of civil war and instability, Libya is expected to hold its first-ever presidential election on December 24. However, recent developments have indicated that the country is simply not ready for elections. There is still no constitutional basis that will establish presidential powers. Moreover, local armed actors and foreign mercenaries continue to threaten the fragile security situation in the country. As the election date nears, many fear an outbreak of violence and instability will come along with it.

On December 17, the Atlantic Council’s North Africa Initiative held a panel discussion on “Libya: The long road to elections” on the democratic process in Libya, analyzing shortcomings and failures that threaten to derail the set election timeline. The event was moderated by Karim Mezran, Director of the Atlantic Council’s North Africa Initiative, and featured remarks by Emadeddin Badi, nonresident senior fellow with the Atlantic Council’s Rafik Hariri Center & Middle East Programs; Benjamin Fishman, senior fellow at the Washington Institute for Near East Policy; Mary Fitzgerald, nonresident scholar at the Middle East Institute; and Roberta Maggi, junior project officer for the Middle East & North Africa program at the Geneva Centre for Security Sector Governance.

The discussion highlighted recent developments in Tripoli that threaten to spoil the country’s elections. Only a few days away, the viability of the set election date remains unclear.

The long road to elections

Throughout the discussion, Emadeddin Badi highlighted how the recent military build-up in Tripoli resulted in armed militias surrounding the headquarters of Prime Minister Abdul Hamid Dbeibah for hours. Badi criticized the role of the political elite in manufacturing the current security crisis, noting that they have greatly profited from this instability. He argued that these elites attempt to poise themselves to replace the Government of National Unity (GNU), a broad coalition with the international community’s support, essentially unraveling the entire Libyan political agreement.

He also noted that the current situation could result in one of three scenarios. First, presidential elections could be postponed for a couple of months, an outcome the current United Nations (UN) Secretary General Special Advisor on Libya, Stephanie Williams, is pushing for. However, getting all factions to agree to this new timeline will prove challenging. Second, some members of the country’s political elite could find a replacement to the current GNU. This maneuver, too, may prove difficult to achieve, as it will neither be endorsed by a multinational track nor by the House of Representatives (HoR), the parliament based in eastern Libya. Lastly, Prime Minister Dbeibah and warlord Khalifa Haftar, who rules the east of Libya, could strike a power-sharing deal. Yet, this political maneuver risks producing a runoff election against Saif al-Islam Gaddafi, a mutually undesirable candidate because of the large basin of supporters he inherited from his father, toppled dictator Muammar Gaddafi.

Mary Fitzgerald discussed the strong willingness of the Libyan civilian population to participate in the democratic process. She noted that, back in 2014, during the country’s second-ever parliamentary elections, only six hundred thousand Libyans signed up to vote. However, this year, some 2.4 million Libyans have already collected their registration cards with every intention to vote for their future leader in the upcoming elections. She remains wary of the motivations behind this rise of voter registration, questioning whether people are motivated to vote in favor of the candidates or against them to show their discontent. Either way, Fitzgerald argues that political polarization continues to threaten the very fraught situation on the ground. With two highly-disputed electoral laws that the HoR illegitimately passed, she emphasized that their acceptance by the international community proved problematic to the process.

Agreeing with Fitzgerald’s remarks, Ben Fishman highlighted the role of international actors in the country, arguing that they are complicit in impeding the postponement of the December 24 election date. The election date was set in November 2020 when the Libyan Political Dialogue Forum (LPDF), a seventy-four-member intra-Libyan group, congregated in a UN-led virtual meeting to discuss the timeline and process of the elections. However, Fishman noted several failures by the UN Special Envoy for Libya, Jan Kubis, that have hindered the electoral process in the country. Prior to his resignation from the position, Kubis accepted Parliamentary Speaker Aghila Saleh’s highly-disputed electoral laws without any modifications and recommended that the United Nations Security Council vote to endorse it.

Fishman noted that the electoral laws were illegitimate because they were void of a parliamentary vote and also widely unpopular among Libyans. However, international actors legitimized them in the hopes that they could help see the country through to elections. He also noted that Kubis’ failure to facilitate negotiations among Libyan factions and his failure to invest in the LPDF have derailed the agreed-upon roadmap to elections.

Discussing the importance of security-sector reform in the country, Roberta Maggi argued that the necessary security conditions to hold elections in Libya are still absent. She emphasized that security-sector governance needs to include aspects of state building. Although timeline issues have hampered these efforts, one thing remains clear: elections alone won’t fix the lack of security-sector reform in the country. Lastly, Maggi firmly underpinned the notion that Libya must undergo a reconciliation process if there’s any hope of future political platforms, noting that “unity cannot be a byproduct of a broken system.”

All panelists agreed that the election date set for December 24 isn’t viable and that postponement of elections seems to be the most likely scenario. Badi noted that there isn’t much anxiety amongst Libyans on the postponement, as they’re ready to vote, and a technical delay won’t cause significant tensions. However, he warned against the threat posed by armed actors in the country and argued that sanctions have not been leveraged seriously enough to deter political spoilers in the country.

Also emphasizing the role of international actors, Mary Fitzgerald argued for a framework to stabilize the country after elections. She explained that far too much attention had been dedicated to preparing Libya for elections with little consideration of the implications of the election results. Furthermore, if elections were to be postponed, a large challenge facing the international community would be dealing with the disappointment on the ground. Because Libyans have shown their strong enthusiasm for the upcoming elections, postponing them could serve a blow to the security situation in the country. It may also lead to a disenchantment with the democratic process, similar to what the country saw during the 2014 elections, when only 18 percent of the population headed to the polls.

Fishman voiced his disfavor towards an indefinite postponement of the elections. Instead, he advocated for the UN to become the focal point of negotiations, emphasizing the need for strong US support. He noted that the UN should set a clear and realistic election timeline that requires a robust modern mechanism and also includes international observer monitoring and ballot ticket printing. The US can impact things by keeping international spoilers out of the conflict, which is a key element to maintaining stability before and after the election.

Maggi built on Fishman’s recommendations by highlighting the security situation in the country. She argued that, as Libya undergoes this critical juncture in its democratic trajectory, international actors must take stock in recalibrating their approach to the country by helping stabilize the security sector, as it remains key to ensuring stability in Libya. A new national framework for security provision must be considered and should encompass realistic short-term milestones. With many lessons learned over the past decade, the international community can support confidence-building and reconciliation in Libya, but only given that they adopt a cohesive roadmap to elections and truly insist on a transition.

Yaseen Rashed is a Young Global Professional with the Middle East Programs at the Atlantic Council. 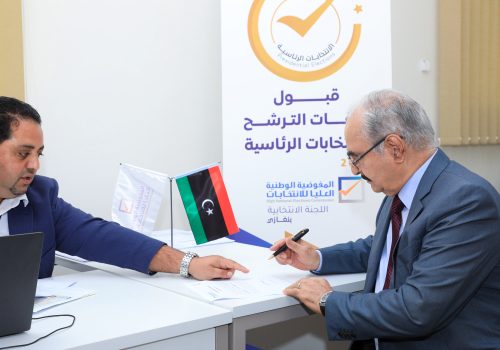 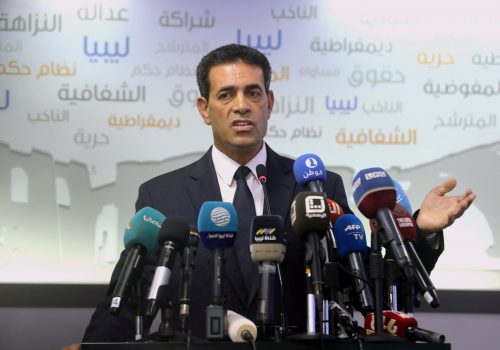 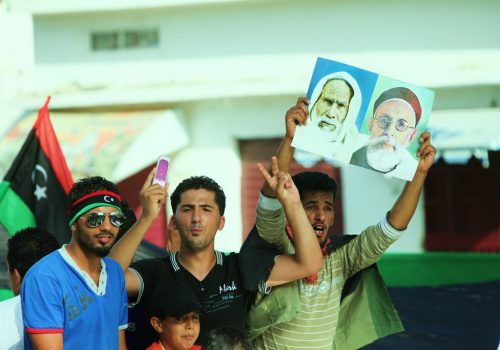