The International Labor Organization (ILO) released its annual report on forced labor on September 12, highlighting the “reform of the sponsorship system” in Qatar and displaying Qatar as a case of ILO success.

Over two million migrants work in Qatar, making up 95 percent of all private sector workers, primarily in construction and the service industry. Qatar’s treatment of migrant workers came to the public fore in 2010, when it was announced that Qatar would host the 2022 FIFA World Cup, sparking accusations that Qatari employers were violating workers’ rights and that the Qatari government had legalized a system of forced labor.

The ILO worked with Qatar in the intervening years to abolish the kafala, or sponsorship system, which it identified as the main force in creating a system of exploitation and forced labor in Qatar. The kafala system bans migrant workers from leaving Qatar without an “exit permit” from their employer. Additionally, they are also not allowed to leave their job without their employer’s permission.

However, despite this, workers in Qatar are still victims of a litany of rights abuses, including retaliation by their employers when trying to leave employment, nonpayment of wages, lack of repercussions when employers commit crimes against their workers, and, in extreme cases, worker deaths. Although Qatar has made significant reforms, without proper implementation, migrant workers in Qatar will continue to suffer and die with no consequences for their employers.

In 2016, the ILO governing body sent a high-level tripartite mission to Qatar. The mission found that the accusations of forced labor were sound and concluded that the kafala created a system of exploitation and forced labor in Qatar.

The kafala system was established under Law No. 4 of 2009 in Qatar during a period of economic growth, when the country wanted quick, cheap labor, and there were many migrants—mostly from Southeast Asia—seeking employment in the Gulf. This gave an inordinate measure of control to employers, who also began confiscating worker’s passports and withholding their wages. Workers who left their job without employer permission could be reported to Qatari authorities and would face fines and potentially criminal charges. This created a system of forced labor, exacerbated by many workers paying “recruitment fees” before leaving their home countries, spurring further debt and trapping them in Qatar to pay it off even if they wanted to leave.

The ILO worked with Qatar to reform these issues from 2016 onwards. The ILO has focused on dismantling the kafala system, creating a minimum wage, and enhancing other worker benefits. The following labor reforms were put into place, which appeared to end the kafala system in 2020:

These changes had a positive effect. Since then, over 240,000 workers have changed jobs and over 280,000 workers saw their wages increase. However, other reforms have been insufficient and migrant workers continue to face substantial rights abuses.

Although workers are now allowed to freely move between jobs, many employers have begun retaliating against those who attempt to do so. “Retaliation takes the form primarily of canceling their residency permits, filing absconding charges, or threatening the worker with deportation,” said Max Tunon, head of the Qatar office of the ILO. Many employers also charge workers large amounts of money to leave their contracts.

In addition, many employers withhold salaries. In March, Human Rights Watch (HRW) discovered that the migrant workers at the construction firm Bin Omran Trading and Contracting (BOTC), which has approximately 6,700 employees and is a firm working on the construction of stadiums for the FIFA World Cup, had not given their employees their salaries for up to five months. HRW talked to multiple BOTC employees who had been forced into debt to make ends meet. BOTC also sent memos to their employees telling them to keep working, despite their lack of wages, or they would further reduce their paycheck. In 2015, Qatar created the Wage Protection System (WPS), which claimed to ensure that workers receive their salaries on a monthly basis. However, the Qatari government has not forced BOTC to pay their workers their due wages.

Qatari authorities have also failed to investigate migrant worker deaths on the job, which are often ruled as “natural causes” despite no evidence of prior sickness or illness. A report from Amnesty International found that Qatar “routinely issues death certificates for migrant workers without conducting adequate investigations, instead attributing deaths of ‘natural causes’ or vaguely defined cardiac failures.”

The Qatari government fails to look at other possible causes of death—such as extreme heat in open construction sites—thereby ensuring that the employers are not responsible for compensation to the grieving families. Often, families are deprived of their sole breadwinner and are unable to make ends meet in the wake of a devastating loss deemed “natural” by Qatari authorities.

And there is no justice for these crimes. In fact, when workers do protest these abuses, they face detention and even deportation from the Qatari government. In August, Qatar arrested at least sixty migrant workers who had been protesting going months without their salaries. Qatar also deported some of the protestors, citing that the protesters were breaking public safety laws.

The Qatari government has worked with the ILO to make significant reforms, particularly in the last four years. However, these reforms are not being implemented and many companies are violating Qatar’s new legislation with no ramifications.

Since it profited from the exploitation of migrant workers and has the ability to strongly influence Qatar, FIFA has a responsibility to pressure the country to create a comprehensive and participatory remedy program for migrant workers and their families to provide compensation for the abuses suffered. This proposed program has been termed the Compensation Fund for Migrant Workers in Qatar. Furthermore, FIFA’s fourteen corporate partners and World Cup sponsors should call on FIFA to take action. Budweiser, Adidas, Coca-Cola, and McDonalds have already called on FIFA and the Qatari government to create the aforementioned fund—the rest should follow their lead.

The FIFA World Cup is less than a month away. The workers responsible for making this event happen continue to face death and abuse each day, while risking deportation if they protest. It’s time to change that. 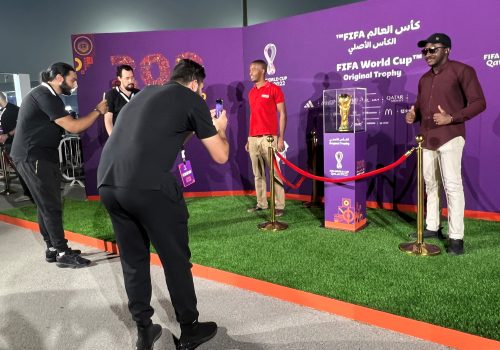 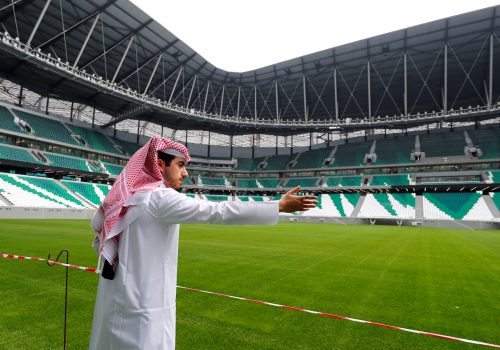 Soccer for peace in the Middle East and North Africa

Although uniting around sport might be mainly symbolic, it could also be a confidence-building effort that could reduce tension and increase integration in a region that would mightily benefit from both.