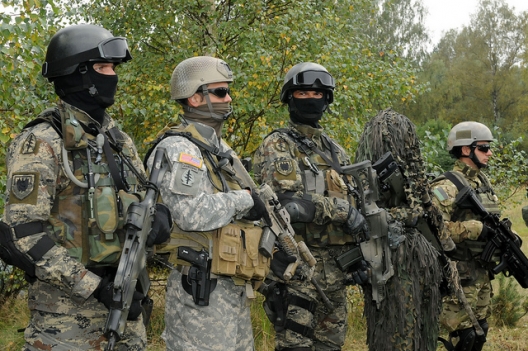 US and European special forces have been incredibly busy over the last decade in global hot spots such as Iraq and Afghanistan. But as major counterinsurgency operations recede, there is still work for them to do, not least in Europe where they could play a key role in re-assuring US allies and deterring Russian aggression. SOF could be just as effective in deterring and defending against little green men as they have been in combating insurgents and terrorist networks.

The Ukraine crisis has triggered a scramble by both the United States and NATO to find ways to quickly reassure the Alliance’s eastern members, such as the Baltic states, Poland, and Romania. Already the United States has sent airborne infantry to the Baltic states, bolstered Baltic air policing, and sent F-16 fighter jets to both Romania and Poland. The recent Dragoon Ride exercise demonstrated the ability of a US Army cavalry unit to move quickly through the Baltic states, Poland, Czech Republic and Germany. European allies have contributed too, with Norway, Denmark, and the UK, among others, sending troops to the Baltic states for live-fire exercises. The Obama administration has also announced a $1 billion “European Reassurance Initiative,” that will help pay for US military reassurance efforts in Europe over the next year. Coming out of the Wales Summit in 2014, the Alliance is also at work on a Very High Readiness Joint Task Force, which is intended to be able to quickly bring credible combat power to anywhere within Alliance territory, and beyond. Admittedly, this effort has proven to be slow going, but it is an important step in the right direction

Much suggests the current US and NATO efforts to reassure the eastern members will have to remain in place for some time to come, with some even calling for the permanent presence of forces in NATO’s east. And while the focus has been on general purpose forces such as infantry and fighter jets, and a handful of main battle tanks, special forces could play a key role in reassuring US allies and deterring the use of hybrid warfare against other European nations.

Both the Georgia war in 2008 and the current Ukraine crisis were prosecuted by Russia using “hybrid warfare,” with the blended use of conventional forces, special forces, information operations, economic and energy tools, and the leveraging of separatist forces. This is a hard challenge for the United States and NATO to respond to, as the identity of the adversary is less than clear, and the actions taken are just below the level for what constitutes outright war. Many of NATO’s eastern members have political, social, and economic conditions, as well as minority groups similar to those leveraged by Russia in Ukraine and Georgia, which makes them susceptible to the same kind of pressures and methods in a crisis contingency. This is, however, a challenge that special forces were created to address. They are tailor made for gathering intelligence, training partners, and operating against small adversary formations in an uncertain, chaotic, and dynamic security environment. SOF would also be ideal for detecting Russian activities early, and counter them with precision.

Using special forces for the reassurance mission in eastern Europe would also have political and strategic benefits. They provide a visible example of US and NATO boots on the ground, but they are light and small, unlike, say, mechanized infantry or armor units, which means that Moscow could hardly call the deployment a threat to Russia’s territorial integrity. Finally, US Special Operations Command is currently hard at work building the “Global SOF Network,” which is intended to enhance inter-operability and cooperation among the special forces of US friends and allies across the world. Deploying US special forces to eastern Europe would provide a hands-on, real-world, opportunity for directly working with the special forces of the Allies in the region.

But the special forces from the NATO nations may also have to do something that is uncomfortable for their community in their new role in eastern Europe; step out of the shadows. In order for someone to be deterred they need to know that they are indeed being deterred. There is already a trickle of reports and second hand accounts of the presence of allied special forces in, for example, the Baltic states and Poland. While their presence is a very welcome development, they must actually be more prominently announced in order to reach their full effect in countering the threat from little green men.

Given events in Ukraine and Russia’s aggressiveness and unpredictability, it is urgent that NATO recaptures its conventional warfighting skills and places the focus back on deterring and defending against aggression in Europe’s east. But the special operators who rose to military, and pop-culture, prominence during the age of counterinsurgency shouldn’t be consigned to the barracks. They are needed more than ever on NATO’s precarious flanks.