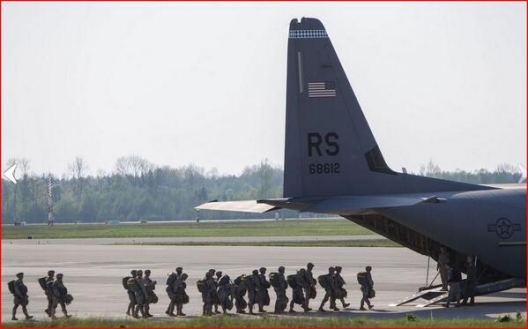 US paratroopers in Estonia (photo: US Mission to NATO)

Given Moscow’s aggression in Ukraine, companies of airborne soldiers have been deployed to Estonia, Latvia, Lithuania and Poland to assure those countries and serve as tripwires. But the soldiers are all Americans. Where are the Europeans? Their absence could lead to miscalculation in the Kremlin and questions in the US Congress. . . .

European ground troops have taken part in exercises in the region, but they are not staying. The US army in April deployed companies of 150 soldiers each to Poland, Lithuania, Latvia and Estonia; the Pentagon said they would maintain a “persistent” presence for perhaps as long as a year, providing the states in which they are stationed with tripwires. Yet the solely American nature of the persistent ground force deployments is not healthy for Nato.

The Kremlin may see an alliance divided. It can hardly have escaped Moscow’s notice that, in the past two months, the EU has balked at the strongest sanctions Washington has sought to apply. Will the Russians now conclude that the effort to assure eastern allies is more American than Nato? If so, Moscow may attempt to drive a wedge between the US and its Nato allies.

Mr Putin seems intent on challenging the alliance. The dearth of European boots on the ground might lead the Kremlin to a dangerous conclusion: that important allies might not be prepared to carry out their commitment under Nato’s Article 5 to defend the Baltic states. The consequences could be disastrous. . . .

The lack of a sustained European ground presence has another unintended impact. The fewer conventional forces are committed to their defence, the louder will be the insistence from Baltic and central European allies that US nuclear arms remain in Europe. Allies such as Germany, the Netherlands and Belgium have expressed a desire to see the US nuclear presence reduced. Without robust conventional assurance, however, nuclear arms are likely to stay.

The writer is a senior fellow at the Brookings Institution and former US ambassador to Ukraine.