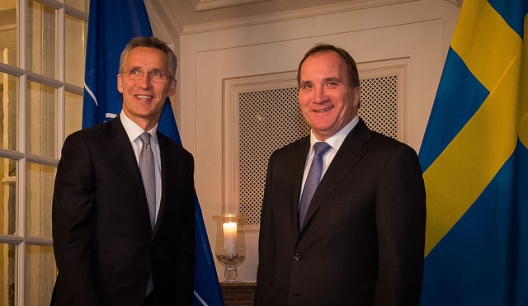 At the NATO Summit in Warsaw, the Prime Minister of Sweden participated, for the first time, in a meeting of the heads of state of the Alliance. In the past few years, Sweden has been growing closer to NATO than ever, causing some to see Stockholm as very close to joining the Alliance. Although the government of Stefan Löfven has asserted that joining NATO is not an option in the near future, Sweden’s deepening partnership with NATO has wide ranging strategic implications in the tense Baltic Sea region.

Sweden has historically been militarily neutral, but since it joined the European Union (EU) its leaders see it instead as non-aligned. However, in today’s setting, Sweden may have to make a crucial decision on whether to stick with this policy. Stockholm has made it evident that it is wary of Russia’s looming presence in the East. Since the Russo-Georgian War of 2008, it has started to question the prudence of its non-alignment, something that was only amplified by Russia’s annexation of Crimea. Any shift towards the West definitely has wide ranging strategic impacts not only on Sweden itself, but also on the overall dynamics of the Baltic region.

Sweden signed a Partnership for Peace agreement with NATO in 1994. Many of the countries that signed this agreement have used it as a foundation to later becoming member states of NATO. Over the past few decades, Sweden has contributed troops to various NATO missions under the banner of peacekeeping, including several high profile missions in the Balkans. Sweden’s contribution to these NATO missions, is an indicator that even though it is not a member, Stockholm has a military relationship with NATO. At the NATO Wales Summit in 2014, Sweden signed a Memorandum of Host Nation Support, assuring NATO troops located or in transit through Sweden, support in both peacetime and during a crisis. This memorandum has been a turning point in Sweden’s relationship with NATO and is a reminder of the growing “camaraderie” between them.

Despite being militarily non-aligned, Sweden has always been wary of the Soviet Union and Russia. During the Cold War, there were regular reports of Soviet submarines conducting operations in or around Swedish waters. Now, there are concerns about the activity of Russian aircraft around Swedish airspace. Sweden’s difficult relationship with Russia occasionally flares in intensity, for example the harsh stance they took towards each other due to the Russo-Georgian War in 2008 and Moscow’s seizure of South Ossetia and Abkhazia from Georgia.

The biggest disagreement between the two Baltic powers has been over Russia’s actions in Ukraine. As a result of Russia’s use of force against another neighbor, Sweden decided to reinvigorate its military by increasing defense spending and revitalizing its territorial protection force. Sweden has been very open in criticizing Russia for its actions in Ukraine.

The Crucial Case of Gotland

Russia has been actively pursuing a strategy of Anti-Access and Area Denial (A2/AD) over the Baltic region, particularly through its Kaliningrad exclave. Some argue that Russia already has the capability to implement such a strategy over the entire airspace of the three Baltic countries. Russia has made serious inroads in developing an A2/AD capability over the Baltic Sea, combining traditional air and naval components with electronic warfare and space capabilities as well.

The missing piece of the puzzle seems to be Gotland, a Swedish island in the Baltic Sea that has significant strategic value. For either side, Gotland would be a key asset and could limit #Russia’s ability to impose an area denial bubble over the Baltic region. During the Cold War, Sweden had neither the intention nor the capability to unilaterally alter the dynamics over the Baltic Sea. However, this appears to be changing with Sweden deciding to deploy a new territorial force on Gotland and upgrading military infrastructure under their new military doctrine.

On a Knife’s Edge

Gotland will be crucial to the outcome of any skirmish in the Baltics and both the NATO and Russia are wary of this fact. Despite this, Russia has not dealt with the situation in the most sensible way. In 2013, Russia simulated a nuclear bombing run exercise over Sweden and in 2014, a Swedish commercial jet almost collided with a Russian military aircraft very close to Swedish airspace. These are just two of the multiple incursions by Russian jets that have been reported. Officials in Stockholm were sent into a tizzy in October 2014 when they claimed that a foreign submarine had been found inside Swedish territorial waters. Swedish and international media suspected that the submarine was Russian and had been involved in espionage activities.

The aggregate effect of all these actions by Russia has had an impact on Swedish public opinion on relations with NATO. Last year, in an opinion poll held over NATO membership, 41% of Swedes polled were in favor of joining NATO as full members. This was a notable jump of almost 25% from the same poll taken in 2012.

While the Swedish government has chosen to remain non-aligned, which works to Russia’s advantage, Moscow seems to be following a policy of needless aggravation that might tip the scales. Russia has to be careful not to disturb this precariously poised status quo, because if the Swedish people decide to take up NATO membership, Gotland goes with them, which will undeniably be a major strategic win for NATO.

Rahul Krishna is a researcher at the Observer Research Foundation.