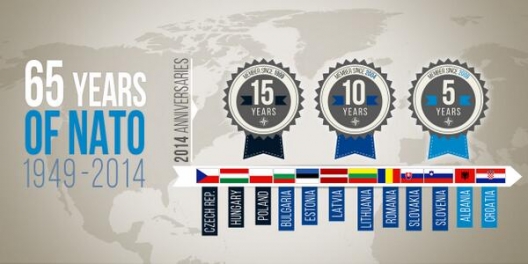 NATO’s open door is the theme of many meetings these days, and understandably so. At our Foreign Ministers’ meeting in Brussels earlier this week, we celebrated the “big bang” enlargement of 10 years ago, and also the “smaller bangs” that came before it in 1999 and after it in 2009. I believe we have every reason to celebrate, because NATO’s open door policy has been a great success.

It has been a great success, first of all, for our 12 new members. They enjoy greater security than they could ever achieve alone. They have a seat at the table where key decisions are made to shape our strategic environment; they have Allies with whom to share the common burden of defence; and of course, they have the ultimate security guarantee of Article 5 of our founding treaty, which has been highlighted in the context of the crisis with Russia over Ukraine these past few weeks.

As an Alliance, we have been strengthened by the strong commitment of our 12 new members to our defining values – freedom, democracy, human rights, and the rule of law. We have benefitted from the capabilities of our new Allies, and from their contributions to our operations and exercises. And we have benefited from their fresh ideas to help forge the consensus that is the basis of everything we do.

But the benefits of the admission of new members into NATO go well beyond the Alliance. Alongside the enlargement of the European Union, it has helped to erase many of the painful Cold War dividing lines on our continent. And it has brought us much closer to our goal of a Europe whole, free and at peace.

Today, the prospect of joining our Alliance continues to act as a strong incentive for aspirant nations to demonstrate responsibility and commitment; to stay on the path of democratic reform and reconciliation; and to find new solutions to old disputes.

Finally, I would maintain that NATO enlargement has also been good for Russia. And I want to use this opportunity to refute the argument that some in Russia and elsewhere have made that NATO’s enlargement policy was deliberately designed to weaken Russia, and to “encircle” it, and that this policy played a part in prompting Russia to effectively annex parts of Georgia six years ago and to literally annex Crimea last month.

The reality is that we have gone out of our way to reach out to Russia, and to reassure Russia. In the 1990s, we established a special forum for NATO allies to consult with Russia and conduct joint actions. We made unilateral commitments not to deploy nuclear weapons on the territory of the new members, not to permanently station substantial combat forces further east, and not to build NATO infrastructure beyond what might be required for reinforcement. Our forces worked shoulder to shoulder in implementing peace agreements in the former Yugoslavia. And we worked hard to engage Russia in dialogue and cooperation on issues of common concern, such as counter-terrorism and counter-piracy – with some considerable success.

Moreover, rather than threaten Russia, NATO’s enlargement – along with that of the European Union — has spread stability, democracy and the rule of law all across Europe. Russia’s western borders have never been more secure. And large parts of Central and Eastern Europe have seen unprecedented economic development and cross-border trade and investment, from which Russia has also benefitted.

It is regrettable that all that progress has now been put at risk by Russia’s readiness to use force to redraw borders and create new dividing lines. In the face of this challenge, it is now more important than ever to uphold the principle that every nation is free to choose its own fate. We must stick to our vision of a Europe whole, free and at peace. And we must keep our NATO door open to help to make that vision a reality.

Our next NATO Summit in Wales in September will be an important opportunity to demonstrate that determination. We will show solidarity, unity of purpose, and our unbreakable commitment to Article 5 of our founding Treaty. But we will also show a similarly strong commitment to Article 10, which affirms that our Alliance is open to the inclusion of new members who can contribute to our common security.

We want to offer an unambiguous Euro-Atlantic perspective to interested countries, and to make clear that any decisions on their inclusion in our Alliance are for NATO members alone to take, on the basis of their individual merits and their ability to meet the obligations and responsibilities of membership. No third nation has a veto over such decisions.

NATO will continue to stand up for the territorial integrity and sovereignty of Ukraine and all our other partners. We will continue to respect their security choices. And we will keep working with those countries that wish to move from partnership with NATO to membership in NATO — so that they too, in time, are ready to step through our open door.

In conclusion, let me say to you, to our Russian friends and their hyperactive propaganda machine: NATO enlargement has not exhausted itself. It has been a resounding success, it has made Europe — including Russia — more secure‎, and it remains a central pillar of NATO’s future.