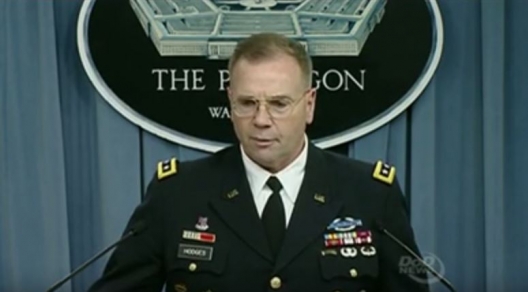 From Marcus Weisgerber, Defense One:  Russia has moved ballistic missiles to and conducted nuclear strike drills from its Kaliningrad exclave, prompting Pentagon fears that Moscow could block access to the Baltic Sea.

“They could make it very difficult for any of us to get up into the Baltic Sea if we needed to in a contingency,” Hodges said in a briefing at the Pentagon….

For exercises in Kaliningrad, Moscow has deployed the mobile, short-range Iskander ballistic missile, Hodges said.”We have seen them do exercises where … there’s a nuclear strike,” Hodges said. “They don’t [say] gray land, and silver land, or red land, or stuff like that. They say ‘NATO is the adversary‘ when they do their exercises. I mean, they’re pretty blunt about that.”

From Jen Judson, Defense News:  The top US Army commander in Europe said the service will work to establish most of its maintenance sites for equipment caches — built up to respond to Russia’s continuing incursion into Ukraine — by the end of next year.

Maintenance sites for what the Army is calling European Activity Sets in Estonia, Latvia, Lithuania, Poland, Romania and Bulgaria will be completed by the end of 2016, ideally by September, Lt. Gen. Ben Hodges, commander of US Army Europe, said Wednesday at the Pentagon.

Three sites in Lithuania, Romania and Bulgaria are now complete because those contracts were quickly finalized, Hodges said. When the 1st Brigade, 3rd Division wraps up its rotation in Europe, the equipment it’s using will be left at those facilities for the next unit to use.

As the plan stands, the next heavy brigade will arrive in April, draw out the equipment and train on it. The equipment will be transferred to newer maintenance sites in Poland, Estonia and Latvia when that unit’s rotation is finished.

Hodges added that he believes one last maintenance site will be constructed in Hungary in 2017 as well….

Hodges said the equipment for the heavy brigade combat team now consists of about 1,300 vehicles to include about 235 to 250 tanks, Bradleys and Paladin Howitzers.

Gen. Dennis Via, commander of Army Materiel Command, told Defense News in October at the Association of the US Army’s annual conference that additional activity sets are needed in Europe.

From David Vergun, Army News Service: Because Russians can operate on their interior lines and quickly shift forces around, all exercises conducted by the United States and its European allies place heavy emphasis on speed, the commanding general of U.S. Army Europe said today….

By “speed,” Hodges explained, he means speed to recognize a potential crisis, speed to act politically and speed of assembly and movement of troops to the point of crisis by road and rail. Once in place, he said, speed and proper execution of operation also would depend on interoperability among all of the U.S. allies, so that’s the focus of training and exercise….

Hodges said that while the United States has done and will continue to do a lot, each European country is responsible for its own defense as well, in terms of training and equipment.

“We don’t want Russians to miscalculate that we’re not capable or willing to respond,” the general said.