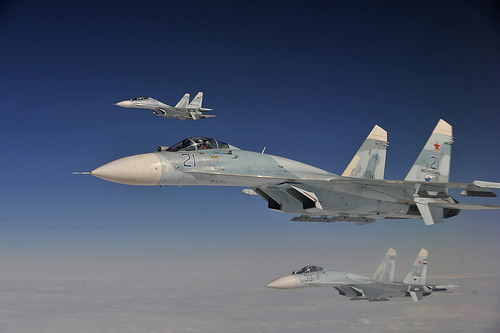 “The alarming thing,” said the commander of US Air Forces in Europe, is that the Russians are catching up. “They’ve closed the gap.”

“The advantage that we had from the air I can honestly say is shrinking,” Gen. Frank Gorenc said, “not only from with respect to the aircraft that they’re producing, but the more alarming thing is their ability to create anti-access/area denied [zones] that are very well defended” by batteries of ground-based anti-aircraft missiles.

After embarrassing fumbles in the 2008 invasion of Georgia, the Russians embarked on “a very large modernization” to improve both training and equipment, Gorenc said. “They learned a lot,” he told an increasingly unnerved roundtable of reporters at the annual Air Force Association conference here. “They [improved] quality and quantity….”

“It’s one thing to address an aircraft threat which has increased significantly — which by the way it has –but clearly surface to air missile systems are much cheaper, they’re much more available,” he said. “There’s clearly a whole set of modern long-range surface-to-air missile systems that are being layered in a way that makes access into that area more difficult.”

Gorenc is focused on the anti-aircraft kill zones that extend from two pieces of Russian territory in particularly: Crimea in the Black Sea and Kaliningrad on the Baltic. (He’s also keeping an eye on the Russians in the Arctic, he said, but that’s less immediate).

“Some of the array that’s in Kaliningrad extends into Poland today. That’s a fact,” he said. In other words, launchers on Russian soil can hit targets in NATO airspace. In fact, Gorenc has said in the past that a third of Polish airspace is in the Russians’ range….