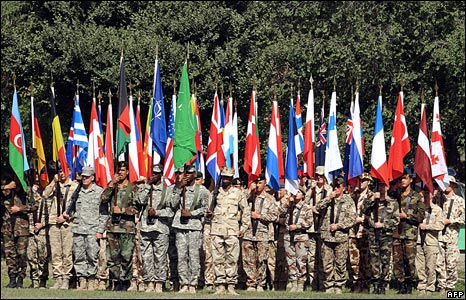 It makes fiscal and strategic sense for the United States to continue to base troops in Europe, the officer who serves as NATO’s supreme allied commander for Europe and commander of U.S. European Command said today.

Together, the United States and Europe make up half of the world economy, Air Force Gen. Philip M. Breedlove said in a discussion with reporters at the Pentagon. And even as force structures change due to shifting economic climates, he said, the transatlantic bond will remain strong.

“Our ability to work together — our tactics, techniques and procedures — are all the same and forged around what is NATO-standard,” Breedlove continued. “And therefore, it is very easy for us to take the field together and do those missions that our nations want them to do.”

The general noted that between 2007 and 2011, Eucom trained 42,000 NATO and NATO-partner troops to deploy to Afghanistan.

“That’s 42,000 Americans that didn’t have to go to Afghanistan,” he said. “Our ability to remain connected to these armies and these air forces [is] directly related to our force structure in Europe. . . .”

The access that the United States enjoys in Europe should not be taken for granted, he said. Breedlove noted that in a crisis, all of the forces that operate in North Africa will first come from bases in Europe. Most of the forces that would eventually deploy in such a crisis are shared between Eucom and U.S. Africa Command, he said, but they are housed on Eucom bases in Eucom nations.

“You cannot get to the Middle East without using the lens of the bases and infrastructure in Europe,” he said. “Everything I do, and everything European [that] Eucom forces do in Europe to support [U.S. Central Command] relies on these bases. . . .”