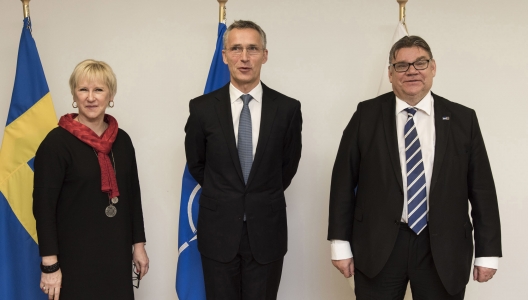 When the EU’s heads of state meet in Brussels on December 15 & 16, cooperation with NATO will be on the agenda. Given the arch of instability that has evolved at the borders of Europe, cooperation between the EU and NATO seems finally to have moved from an objective that is “nice” to change that is “needed.”

There is a broad realization that the challenges are huge, and resources scarce. Inefficiency and lack of results due to organizational deadlocks are simply not acceptable anymore. The United States, perhaps somewhat surprisingly, has been a key driver in this direction. The underlying motive is a genuine fatigue with the low defense spending of the Europeans. In order for the transatlantic link to remain strong, the Europeans must step up on security. The United Kingdom was supposed to guarantee the balancing act between the organizations, to avoid duplications and rising costs. Brexit put an end to that strategy, but the effort towards increased EU-NATO cooperation moves on anyway.

As EU members and close partners to NATO, Sweden and Finland should assume leadership in developing security and defense cooperation between the organizations in two specific fields: hybrid threats and state resilience. These are central areas in which EU-NATO cooperation could make a real difference.

Sweden and Finland provide strong voices in the EU as net contributors to crisis management and have a long tradition of involvement in neighbourhood issues, not least to the East. Thus, they can with credibility and competence assume leading roles in pursuing questions and issues of common interest. Already, Finland has committed to establishing an EU Center of Excellence for countering hybrid threats.

As close partners to NATO, Sweden and Finland work efficiently with the alliance in a 28+2 format within the Enhanced Opportunities Program (EOP).

While there are good reasons to continue to keep a strong focus on Baltic Sea Security in the format of NATO, Sweden, and Finland, there are also arguments for broadening the agenda on resilience and make full use of the EU membership of the two partners.

That would also help avoiding a perception of “competition” between sub-regions such as the Baltic Sea and the Black Sea for instance, by bridging understanding of challenges and measures that need to be taken to strengthen the security for the whole security community.

Strengthened stability to the East and in the South promotes security for all, also in the North.

The following range of actions demonstrate what NATO, the EU, and partners could do to strengthen resilience within and beyond their borders.

• As suggested in the review of EU´s neighbourhood policy, Member States can take the role of lead partner for certain initiatives or to accompany certain reform efforts. The role of lead partner should be used to promote NATO-EU cooperation in specific projects for countries that are devoted to bridging the two organizations closer together. Sweden and Finland should put those words to action.

• By forming task groups open for other members, Sweden and Finland can assume the role as lead partners to strengthen EU-NATO cooperation on Baltic Sea security and resilience to the East and in the South.

• These task groups should specifically address the following issues:

1. For the Baltic Sea region, a comprehensive maritime framework can be created. It would endorse the full spectrum of hybrid threats and how to address them, e.g. civil and military measures and responsibilities to secure trade and energy flows, as well as borders and state institutions. Such a framework could build on existing EU-related frameworks such as the EU strategy for the Baltic Sea region, and the 28+2 work in NATO on Baltic Sea security.

2. The Strategic Communications Center of Excellence in Riga should be used to plan how the EU, NATO and partners could connect in order to ensure efficient strategic communication to counter hybrid threats. This would include suggestions for both vertical and horizontal organization and points of contact in individual countries, as well as NATO and the EU. Furthermore, the whole spectrum from pro-active to crisis management should be covered.

3. A roadmap for creating combined NATO-EU resilience teams, to be used in early phases of suspected hybrid crisis, could be developed. Meanwhile, Sweden and Finland should be able to provide expertise to NATO resilience teams, and to draw upon the expertise of the teams if needed.

Strengthening resilience to the East and in the South

1. In countries where both NATO and the EU are active in strengthening resilience, such as Ukraine, Moldova, Georgia, Iraq and Jordan, the organizations should develop closely coordinated country based, comprehensive frameworks to tackle state fragility and vulnerabilities. Within each framework, the roles, projects, goals, and resources for each organization would be declared.

2. In these countries, regular meetings at staff level between NATO and the EU should be conducted in order to ensure information sharing and coordination as the projects proceed.

3. In areas where there is a risk for overlaps, such as security and defense dialogues, counter-terrorism. and cybersecurity, NATO and the EU should strive to develop closely coordinated, generic frameworks in order to ensure a common view on the challenges and how to deal with them, as well as roles and responsibilities.

4. Procedures for the exchange of assessments of projects on resilience, including lessons learned sessions, should be also established.

Anna Wieslander is Director for Northern Europe, the Atlantic Council and Secretary General of the Swedish Defense Association. This text builds on a longer article that has been produced as part of the Forward Resilience Project at the Center for Transatlantic Relations at Johns Hopkins SAIS. The main report will be presented in Stockholm on December 8, 2016.