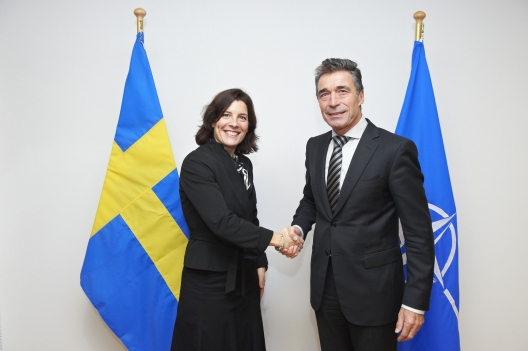 Recognizing that its self-defense capabilities are becoming inadequate, Sweden is shifting its strategic policy to embrace partnerships beyond its Nordic neighborhood, including NATO and the European Union.

The first step in the process was the appointment of an expert group headed by Tomas Bertelman, a former Swedish ambassador to Moscow (2009-12). The group is due to present a final report to the Ministry of Defense in October. . . .

“The government’s decision is timely. The Parliamentary Defense Committee recommended this course of action in mid-2013. We felt that national security, through closer defense cooperation with NATO and the EU, would best serve this nation’s ability to defend itself going forward,” said Peter Hultqvist, the PDC’s chairman. . . .

“There is certainly a stronger interest in forming closer partnerships with the EU and NATO. This is becoming increasingly obvious,” Hultqvist said.

“We may also see new thinking on defense spending and raising spending to a higher level that will satisfy the armed forces’ manpower and capability strengthening needs and ambitions,” he said. “The government isn’t ruling anything out at this point.”

To maximize defense capability, Sweden may need to look beyond the limitations of traditional intra-Nordic cooperation, said Karin Enström, Sweden’s defense minister. The primary purpose of the new review is to better support Swedish defense priorities through strengthened partnerships with alliances such as NATO, the EU and perhaps other states in Europe, Enström said. . . .

The Bertelman-led group, the minister said, is tasked with drafting proposals that cover “development options” in forming new international defense partnerships, especially with NATO and the EU.

“There are real benefits from improved international cooperation in defense. It will allow us to use the resources that we spend on defense and defense materials more wisely, should we engage in partnerships,” Enström said. . . .

“One can hope that the Bertelman group’s report will be pro-NATO. Sweden must realize that we can no longer defend ourselves alone. NATO membership must be debated seriously. It is the best long-term option for our defense and security,” [defense spokesman the Christian Democrats Mikael] Oscarsson said.