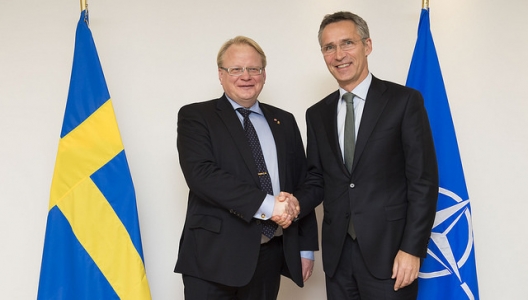 From Charles Duxbury, Wall Street Journal:  Swedish lawmakers formally backed an agreement Wednesday that allows the North Atlantic Treaty Organization to more easily operate on Swedish territory during training or in the event of a conflict or other crisis.

The government’s proposal to sign what is known as a host nation support agreement with NATO was backed by a broad majority of lawmakers. A move by the opposition Left Party to have the agreement sent for further review was voted down by 291-to-21….

The move is a sign of how Sweden, long a scrupulously alliance-free nation in Europe’s north, has edged closer to NATO as nearby Russia has ramped up its military capability over recent years.

Speaking in parliament, Defense Minister Peter Hultqvist noted that the security situation in Europe had worsened and Russia’s actions since 2008 in Georgia and Ukraine had shown its willingness to use military means to achieve its goals.

He said Sweden’s government view remains that the country should remain outside NATO and the commitments to mutual defense membership entails adding that Sweden’s aim of maintaining stability in the Nordic region wouldn’t be well served by a shift in its security stance.

“What we are doing is building our capacity and deepening our relationship with our partners,” he said. “The host nation agreement is a jigsaw piece in that.”

From Reid Standish, Foreign Policy:  “It’s very significant in practical terms,” Magnus Nordenman, director of the Transatlantic Security Initiative at the Atlantic Council, told Foreign Policy. “It helps clear up uncertainties about Sweden’s potential role in a crisis or war in the region.”

The vote easily passed with a broad majority, but the debate in Swedish parliament highlighted the difficult tightrope that Stockholm must walk between Russia and the West. Prior to the vote, there were rumblings that the opposition Left Party and far-right Sweden Democrats, both of which are against NATO membership, would combine their votes to send the legislation to review, where it could have been delayed for up to a year. But the Sweden Democrats at the last minute agreed to back the closer military cooperation, denying the Left Party the necessary support to table the vote.

“This was the next big step in terms of deepening Sweden’s cooperation with NATO,” said Nordenman. “But it’s not close enough yet for membership. Domestically, there is still tons of hesitation….”

[A]nalysts contend that while support has not significantly increased for the military alliance since the Ukraine crisis, the number of those undecided has risen sharply. And that, says Robbie Gramer, associate director of the Transatlantic Security Initiative at the Atlantic Council, illustrates that the events of the last two years have shifted the NATO debate in both Finland and Sweden.

“It’s still very controversial in both countries, but the growing number of undecided people shows that a shift is taking place,” Gramer told FP. “It’s a prelude to a prelude of NATO membership.”