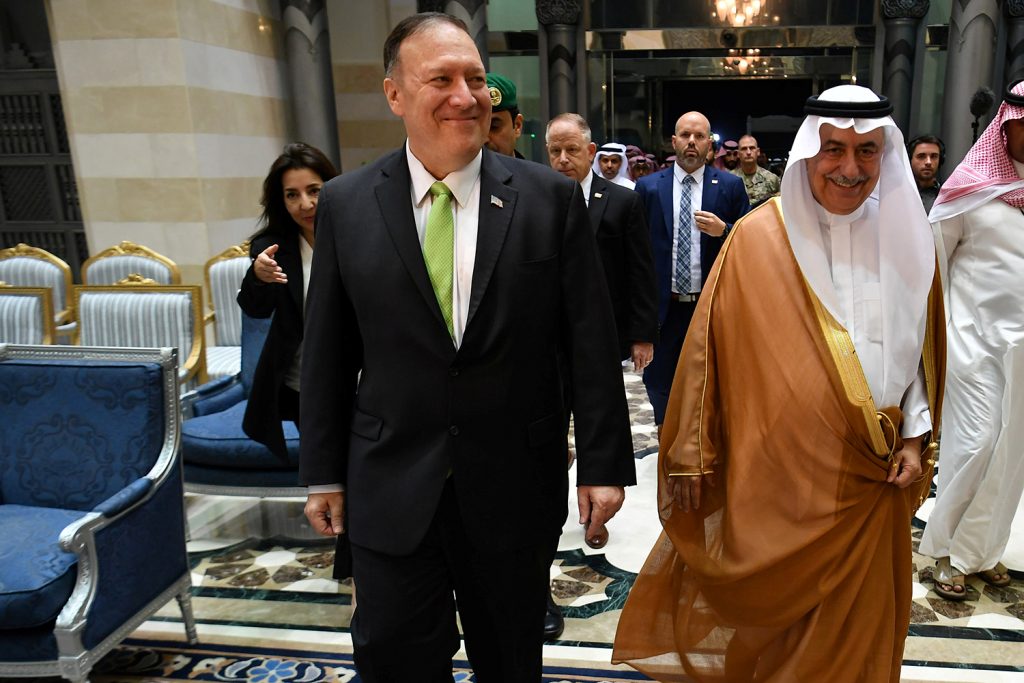 US Secretary of State Mike Pompeo walks after stepping off his plane upon arrival at King Abdulaziz International Airport in Jeddah, Saudi Arabia, September 18, 2019. Mandel Ngan/Pool via REUTERS

A series of recent US administration decisions to disengage or not to engage at all have overturned old assumptions about US goals, capabilities, and commitments in the Middle East.

These include the troop withdrawal from northeast Syria; the muted response to Iran’s attack on Saudi Arabia’s oil infrastructure at Abqaiq; the refusal of US policy makers to engage with elements of the Iraqi and Lebanese governments; and near total lack of engagement on Libya.

But alongside these decisions are multiple indicators that point to continued US commitment to the region. This commitment is evident in the volume of US investment in training and capacity building; interoperability and equipping; counterterrorism and intelligence sharing; trade and investment; and support for reforms initiated by the region in areas like good governance, justice, law enforcement, and finance.

The United States has over 35,000 troops stationed in NATO countries, but 45,000-65,000 in the Gulf alone, according to open source numbers recently reported by The New York Times. Those numbers, notably, do not include US troops in Iraq or Afghanistan.

Another tangible sign of commitment is the administration’s continued call for a Middle East Strategic Alliance (or MESA). The US president advocated for this alliance several times in his remarks at the UN General Assembly (UNGA) in September and US Secretary of State Mike Pompeo held a margin meeting on MESA at UNGA as well. The National Security Council continues to conduct policy meetings on MESA with the interagency, and coordination meetings on MESA with regional partners.

The push to establish this architecture, with economic, security, and energy components, is a strong indication of the US intent to remain engaged in the Middle East and to strengthen this commitment. It should be noted that the delay in establishing MESA is due to a push from some regional partners to limit MESA to a security-only agreement. In other words, the United States is seeking to be engaged and committed at a deeper level, but the signal from the region itself is that this is not what the region wants.

Combine this with the region’s flirtations with stronger security relationships with Russia and China. Or the fact that the region was upset when the United States entered the Joint Comprehensive Plan of Action (JCPOA) without consulting partners, but the region is now conducting backchannel talks with Iran without notifying Washington.

Questions about the region’s commitment to its relationship with the United States did not begin this year. In spring 2018, the US administration asked Gulf countries to provide financial support to US operations in Syria, since they were not willing to contribute their own troops to the effort. The US administration warned then that without regional partners sharing the responsibility, the United States would need to draw down its presence and reduce its financial burden. This ask was denied. Yet the expectation remained that Washington would continue to fight the Islamic State and challenge Bashar al-Assad’s hold on power.

Fast forward to autumn 2019. President Trump’s startling decision to withdraw from northeastern Syria was undoubtedly influenced by his perception that no Arab leaders had skin in the game and that several are normalizing relations with Assad.

Look also to the US administration’s continued requests for resolution of the rift between Qatar and its Gulf neighbors. On no other issue during this administration has the interagency been so unanimously on-message.  The president signed two beseeching letters to the heads of state of Egypt, Saudi Arabia, the UAE, and Bahrain, and the State Department dispatched Tony Zinni as a special envoy solely dedicated to ending the dispute. The US request for resolution remains wholly rebuffed.

To end this confusion and reinforce the mutual commitment, two actions should be taken.

First, the Gulf Cooperation Council (GCC) plus Jordan and Egypt, as initial founding members, should establish MESA. This platform would lock-in a sustained US role in the region. As a defensive alliance envisioned to be able to address the unknown threats of the future and incentivize other regional nations to eventually join, this bloc would have greater leverage internationally and with the United States than any single nation.

The intent of MESA’s four pillars (economy, security, energy, and governance of the alliance) is twofold. One: build the members’ economies smartly and in a networked way that boosts resilience and regional self-sufficiency. Two: establish a regional security architecture. When member nations plan for defense jointly, each member nation effectively pushes its borders out to the region’s borders. This creates a buffer for each nation, making each nation safer.

It is in the interest of the region to finalize an agreement that frames the base level for a US role in the region going forward. Such an agreement could be expanded in time to include other friends and partners. It would clarify for potential adversaries the level of US obligation to the region and act as a demonstrable explanation of US policy and redlines, thereby supporting deterrence.

Second, the Middle East, Europe, Asian partners, and the United States should create a mechanism to draft coordinated strategies for stabilizing countries in turmoil or transition. This will prevent transitioning countries from continuing to be destabilized by the competing interests of external actors. It will encourage greater US involvement, when Washington sees this “burden sharing” by others.

It will create opportunities for constructive engagement among nations with tense relations, as specific, shared objectives related to stability are pursued.

Follow the strategies with implementation plans. Begin executing. There is no time to lose.

A window of opportunity remains for the region and the United States to reassure one another that the friendship is hard and fast. The urgency is driven by the decision timelines of Arab regimes who must respond to overtures from Russia and China and threats from neighbors and non-state actors. It is likewise driven by the US election cycle, where campaigns will soon need to finalize their national security platforms. The United States and the region need to be vocal about the level of commitment they believe they have a right to expect from the other and the quantifiable level of commitment they are willing to make in accord, before the campaigns define this for them.

On Tuesday, November 5, the Hadi government signed a power-sharing agreement with southern separatists in Riyadh. The separatists and Hadi-led Yemen Government are backed by the Saudi-led coalition in Yemen, specifically by the United Arab Emirates. Infighting between them further fractured the civil war in August when the separatists seized Aden from Saudi-led forces. It […]