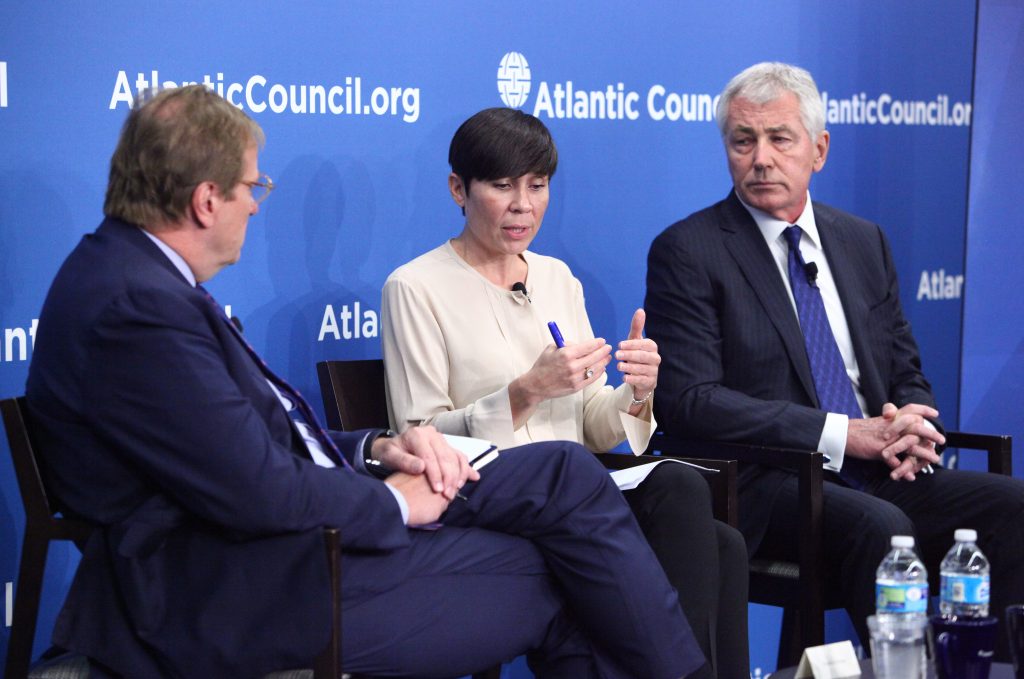 A failure to deal appropriately with the migrant crisis will cause rifts within Europe that will have serious implications for transatlantic unity, Norway’s Defense Minister, Ine Eriksen Søreide, said at the Atlantic Council on September 24.

“How we handle the ongoing refugee crisis will be a test for Europe,” Søreide said while describing the magnitude of the migrant crisis—the largest migration of people since World War II—as “staggering.”

Europe has, so far, not been able to address this crisis in a coherent manner, she added.

The European response to the influx of migrants, most of them fleeing the war in Syria, has ranged from rolling out a welcome mat (Germany) to building razor wire fences to keep out the migrants (Hungary).

“Not handled correctly, the refugee crisis can lead to further fragmentation within Europe,” Søreide warned, adding that this could have negative implications for European cohesion, including on its collective decision-making ability within the realm of security and policy.

“An increasingly polarized and fragmented Europe could damage or undermine transatlantic unity. That comes at a time when unity is more important than ever,” she added.

Divisions within Europe over how to respond to the migrant crisis have been brought into sharp focus this week as European ministers voted on September 22 on distributing 120,000 migrants across Europe. In an unusual break from procedure, which emphasizes consensus on issues of national sovereignty, the ministers decided the issue on the basis of majority rules. The Czech Republic, Hungary, Romania, and Slovakia voted against the plan. Finland abstained.

The question of how to respond to the migrants could spark resentment in some countries, which may view the proposed quotas as an effort to force them to accept these people. Far-right parties are already tapping in to this anger. Hungary’s Prime Minister, Viktor Orbán, for example, warned that the influx of mostly Muslim migrants threatens Europe’s Christian roots.

Besides the migrant crisis, Søreide listed diminishing trust in political institutions such as the European Union and NATO, the rise of nationalism, and the growing momentum of radical parties on the political left and right among the many challenges facing Europe today. Some of these radical political parties openly admire Russian President Vladimir Putin and what he stands for, the Minister said.

The transatlantic relationship has been tested by Russia’s annexation of Crimea in March of 2014 and its ongoing support for separatists in Ukraine’s east.

Søreide said it was important to develop a long-term strategy to deal with Russia.

“No matter what happens in Ukraine, over time we will still, in all likelihood and in the foreseeable future, have to deal with a Russia that is fundamentally different than we assumed before Crimea. … That is why we need an enduring strategy that addresses the enduring change in our security environment,” she said.

In order to achieve this goal, NATO must step up its participation in military training exercises as a way to boost its policy objectives of providing reassurance, support, and stability, she added.

There has been an “astounding shift” in how Russia approaches its interests, not just with the United States, but also with Europe and the Middle East, said Hagel, who served as Defense Secretary in the Obama administration.

Russia wants to have a role in the world and it would be a mistake to try and block that role, Hagel said, adding, “We have got to find common denominators of where then we can work through big issues.”

The transatlantic relationship is strong, but it needs greater investment from both sides of the Atlantic—this means more US engagement and a larger European investment in security, said Søreide.

“US leadership in Europe is needed and it is desired, but a truly comprehensive and enduring transatlantic strategy needs a strong European commitment as well. It needs to be based on both sides of the Atlantic sharing the burden,” she said, warning that a NATO without both credible defense forces and US leadership will lead to increased instability.

However, as global security challenges have grown, defense budgets in Europe and the United States have shrunk.

This situation is not sustainable, said Søreide.

“As Europeans, we need to understand that sustained US commitment depends on our ability to step up to the plate,” she said.

There may be a silver lining to Russia’s annexation of Crimea.

Russia’s actions in Ukraine served as a “wake-up call” and in 2015 the decline in European defense budgets appears to have been halted, and in some cases reversed, said Søreide.

In the United States, it is “mindless sequestration,” which imposes limits on US government spending, that has led to huge cuts in the Pentagon’s budget, said Hagel.

While lawmakers are aware of the problems this causes, they don’t allow those responsible for security to have the resources they need, he added.

“We have been paralyzed and polarized,” Hagel said, and warned that such a situation will hurt US credibility and trust among its allies.

As a result of climate change, the Arctic has rapidly been transformed into the latest battleground for natural resources. Russia and China are among the countries that are racing to capitalize on opportunities as melting ice makes shipping routes more accessible and unlocks potential energy resources.

As a result of the flurry of activity, the Arctic has also become another region where the potential for conflict is high.

The strategic interests of NATO coincide with those of Russia, and Norway doesn’t see a military threat from Russia, said Søreide, but “given the strategic importance of Russian capabilities in the High North, this area will be highly relevant to any potential crisis or conflict involving Russia.”

Noting that Russia is strongly focused on ensuring “sea control and sea denial,” the Minister predicted: “We are on the verge of an Anti-Access/Area Denial challenge in the North Atlantic.” She was referring to defense capabilities designed to keep the adversary out.

Such a challenge, which could threaten the sea lines of communication across the Atlantic, is not limited to the North Atlantic; it concerns all of Europe and the United States, she added.

Image: “No matter what happens in Ukraine, over time we will still, in all likelihood and in the foreseeable future, have to deal with a Russia that is fundamentally different than we assumed before Crimea. … That is why we need an enduring strategy that addresses the enduring change in our security environment,” Norway’s Defense Minister, Ine Eriksen Søreide (center), said at the Atlantic Council on September 24. Søreide was joined in the discussion by Chuck Hagel (right), a Distinguished Statesman at the Atlantic Council who served as Defense Secretary in the Obama administration. Frederick Kempe (left), President and CEO of the Atlantic Council, moderated the discussion. (Atlantic Council/Victoria Langton)