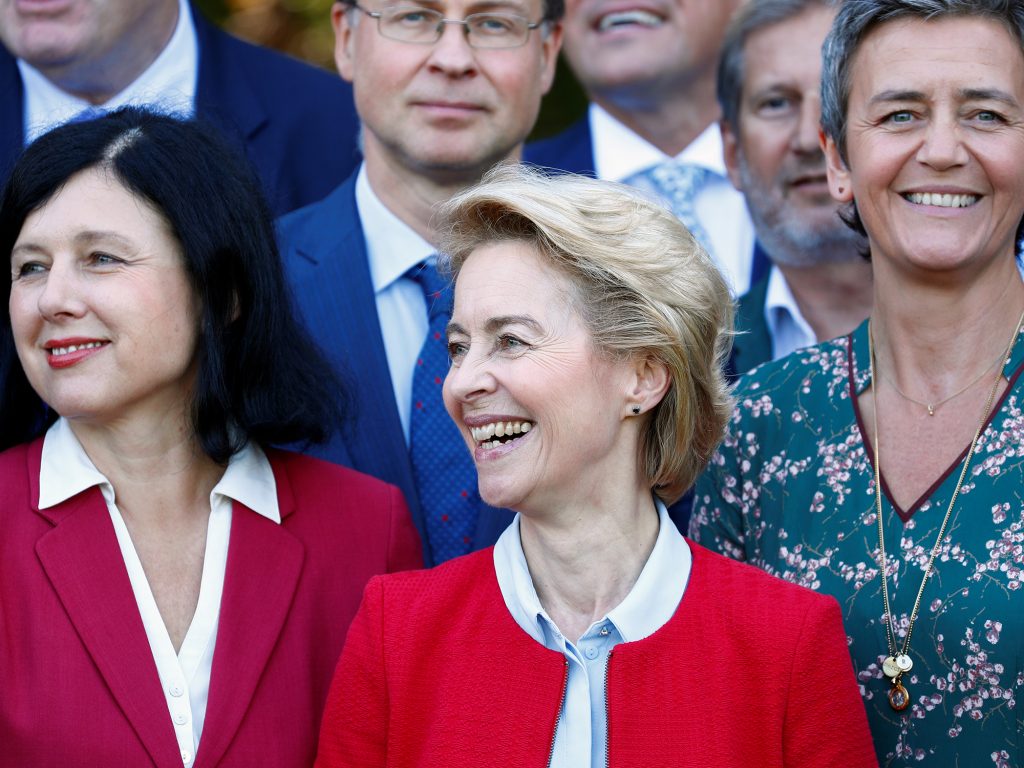 Earlier this week, Ursula von der Leyen, president-elect of the new European Commission, unveiled the new faces and portfolios of her incoming team. If the old adage “personnel is policy” guided von der Leyen, her choices of personalities and structure come with a clear message: expect a more deliberate, political, and assertive EU executive with a geopolitical bent. The selection process and presentation have been received relatively well and signal a new Commission leadership adept at messaging and politics. But questions remain whether von der Leyen, whom the Brussels press corps has quickly dubbed “VDL,” can make the complex Commission work and deliver after outgoing president Jean-Claude Juncker’s “last chance Commission,” which sought to bring “European citizens closer to Europe.”

As with many European Union endeavors, this Commission and its vice president structure are carefully balanced, both geographically among regions and politically among the three largest party families. With party politics on the rise in Europe, VDL’s team marks a shift from the center-right European People’s Party (EPP) to a broader power sharing that better reflects the outcome of the recent European Parliament elections.

VDL’s Commission is not only balanced, it is seasoned and well-experienced. A third of its members were already serving under Jean-Claude Juncker, with some holding prominent vice-presidential positions. Among the newcomers, nine have a significant European experience, whether at the Parliament (Josep Borrell is a former European Parliament president), at the Commission (Margaritis Schinas was previously the Commission chief spokesperson), or as national permanent representative to the EU. Others are domestic political heavyweights, including two former prime ministers (Italy’s Gentiloni and Latvia’s Dombrovskis) and sixteen former ministers.

The president-elect’s own tweets also make clear the Commission’s priorities: climate change (the “Green Deal” must become “Europe’s hallmark“); making the “single market fit for the digital age”; and a greater voice for Europe in the world thanks to a “geopolitical Commission.” This should not come as a surprise. These political objectives are fully in line with Council’s strategic agenda, adopted in June 2019 by heads of states and governments and VDL’s own political guidelines published last July.

The most compelling feature of VDL’s Commission is perhaps its new structure and policy-oriented nomenclature. Portfolios reflect VDL’s political priorities and missions rather than mapping out the internal organization of the Commission’s Directorate-Generals. This is particularly true for the vice- presidents, whose titles, such as “a European Green Deal,” “An Economy that Works for People,” or “Protection of our European Way of Life” are the chapter heads of VDL’s political guidelines. For her, the message is clear: the emphasis should be on political delivery, not bureaucracy. This leads to a structure that builds on Juncker’s reorganization efforts aimed at limiting stove piping and takes it a step further by adding vertical integration and political focus. Each of the three EVPs, in addition to their own portfolio, are tasked with coordinating a political priority: “A European Green Deal,” “Europe Fit for the Digital Age,” and “An Economy that Works for People.”

So, what should we make of what VDL called “a well-balanced, agile, and modern Commission”? In short, a more political Commission supported by heavyweights able to act as relays towards their Member State. This approach is more likely to be meaningful to member state governments and citizens and could carry a greater weight on the global stage. One of the challenges facing the VDL Commission is workability: with eight vice-presidents, complex reporting lines, overlapping competences, and potential clashes amongst seasoned politicians accustomed to the spotlight, can she ensure cohesion, coherence, and effectiveness? Can commissioners with a portfolio close to their country’s priorities keep to a European approach? The need for coordination is likely to reinforce the institutional role for the secretary-general of the Commission, a position which remains vacant after VDL ousted Juncker’s protegé, Martin Selmayr.

VDL’s European savvy is, however, already highlighted by a few smart moves. Naming Margrethe Vestager as EVP in charge of digital affairs while retaining her portfolio as Competition commissioner—a position that earned her the label of the “tax lady” who “hates the US” by Donald Trump—should have the tech giants thinking, but is likely to please Paris and Berlin. Giving the trade portfolio to the Irish commissioner should prove interesting in post-Brexit negotiations with London. He has both a track record of being outspoken on Brexit and reportedly is close to Irish Prime Minister Leo Varadkar, whose member state will be the most affected by the British departure from the EU. At a time of increasing trade policy disruptions and disputes, he also brings trade credentials with him from his current agriculture portfolio and can rely on the new Director General for Trade Sabine Weyand, the former deputy Brexit negotiator and one of the most capable civil servants in the Commission. Other capitals have had their priority issues matched with relevant portfolios, from The Hague’s interest in climate change to Athens’s concerns over migration. And picking a Central European Commissioner, Vera Jourova, to defend values and transparency could help with the rule of law challenges in Poland and Hungary while Paolo Gentiloni’s oversight of fiscal rules may add an advantage in managing Italy’s debt and deficit as one of the Eurozone’s biggest challenges in the near future.

Another interesting development is the continuation of the Commission’s foray into the area of defense policy, which started in 2016 with the Defence Action Plan. The creation of a new Directorate General of Defence Industry and Space, tasked with managing inter alia the European Defence Fund, military mobility, and space programs such as Galileo, enshrine this new role at the institutional level. Ensuring that it falls under the purview of the French commissioner Sylvie Goulard ensures continued French support. At the same time, entrusting Josep Borrell, the high representative, with creating a “European Defence Union,” a staple of German defense discourse and a likely objective of the 2020 German presidency of the EU, is likely to please Berlin.

These new Commissioner-designates must now go through the process of submitting answers to the European Parliament’s written questions ahead of hearings in just a couple weeks before the relevant parliamentary committees. Parliament should then approve the College of Commissioners in mid-October. Since the College is approved—or rejected—as a whole, the Parliament cannot pick and choose commissioners, though it can apply targeted political pressure. There are already signs of trouble for some commissioner-designates: the Polish and especially the Hungarian nominees will face tough questions over rule of law issues and their euroskeptic views; the naming of the migration and security portfolio of the Greek designate as “Protecting our European Way of Life” has also come under fire for allegedly mainstreaming alt-right terminology. But the overall power sharing between the mainstream party families that is built into the new Commission’s fabric means that the risk of the Commission as a whole being shot down over a single candidate should remain low.

In the weeks ahead, observers will need to watch for the European Parliament hearings. Even if a veto against VDL’s team is unlikely, members of the European Parliament are likely to try extracting political commitments and concessions. In addition, attention should be paid to the Commission’s Work Program, particularly how it will turn political guidance into EU legislation. Often ignored and sometimes derided as a bureaucratic nightmare, the program has important effects, as the Commission retains the monopoly on initiating legislative action. In this regard, the selection of a new Commission secretary-general will be crucial for both the program and managing the EU executive’s workflow. Finally, the ongoing negotiation of the 2021-2027 Multiannual Financial Framework—the “EU budget for the future”—could open new battle lines between member states under a no-deal Brexit and be difficult for a Dream Team Commission to manage. After all, once the political priorities have been laid, the proof of the pie is always in the funding.

Olivier-Rémy Bel is a Visiting Fellow at the Atlantic Council. He previously served as a European Affairs staffer to the French Minister of Defence as well as Head of the EU desk at the Ministry’s Directorate General for International Relations and Strategy.

Jörn Fleck is an associate director at the Future Europe Initiative of the Atlantic Council.

Westminster tries to rein Johnson in and avoid no-deal

Arguing that the bill would mean he would lose all leverage with Brussels over a new withdrawal agreement, Johnson said “there is only one way forward for the country…there must now be an election.”