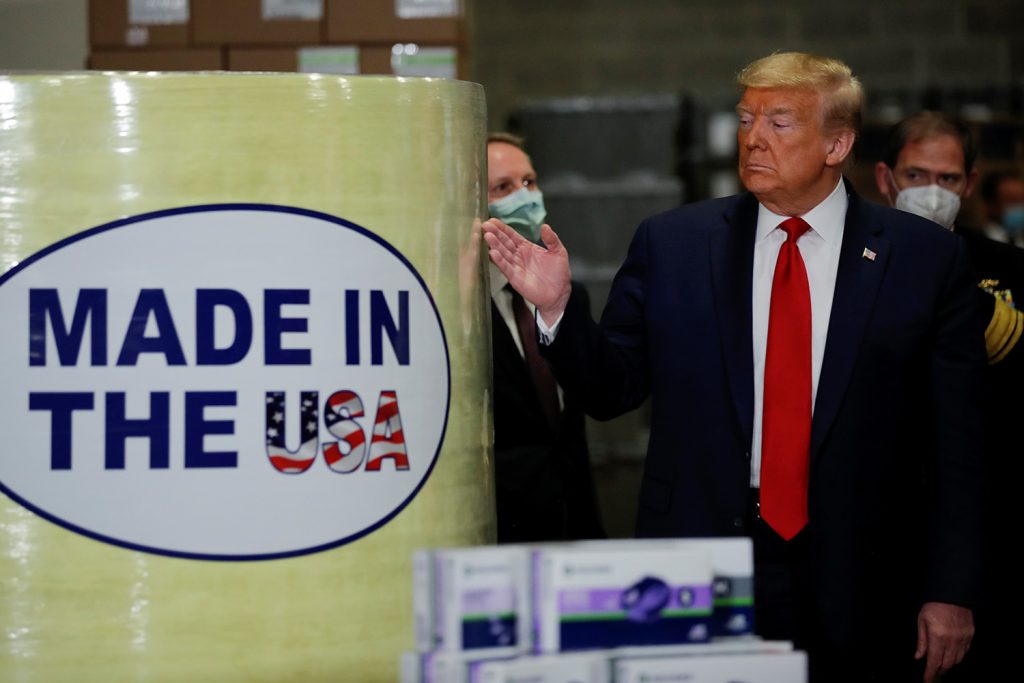 Although it has received little attention amid the political chaos of this election season, one of the most fundamental issues facing the United States is the fine line between protection and protectionism in a post-COVID economy. A central task for the next administration will be to create jobs and implement necessary protections for sensitive industries, while at the same time not trampling the free market principles that have made the United States the most powerful economy in the world. But it’s not clear how policymakers can do that in the United States, or in even in Europe for that matter where governments are facing similar pressures.

In a talk at the Atlantic Council on October 21, Mariana Mazzucato, professor in the Economics of Innovation and Public Value at the University College London and author of The Entrepreneurial State, argued that the United States is at risk of losing its economic advantage because of a breakdown in effective cooperation between public and private sectors. And it was clear from her remarks that a federal policy in this area will take some creative thinking.

A European colleague recently pointed out to me that the United States is traditionally terrible at industrial policy, with the notable exception of the defense industry and some segments of agriculture. The country is simply too diverse, too federalized, and (since the 1980s) too liberalized in mindset to submit itself to that level of government coordination. State-level tax incentives and permissive lending conditions have proven to be much more popular solutions. The Defense Production Act is the only specific tool Washington can invoke to directs firms’ production to meet national security prerogatives, instructing them to, for example, rebuild assembly lines and produce ventilators.

This is why the Commerce Department and the US Trade Representative have ventured into a regulatory backwater and revived Sections 232 and 301 in US trade law, which allow the government to investigate whether foreign trade practices constitute a national security risk to the United States, and enforce “discriminatory” trade practices outside the World Trade Organization (WTO) framework. These numerals are now infamous in our daily parlance, but until four years ago they were forgotten instruments of another era and rest on shaky legal ground. Some have questioned whether these actions are legal under US law, and the WTO has recently determined that tariffs on China (under Section 301) are contrary to the organization’s rules.

Being charitable for a moment, I’ll credit the current administration for ingenuity when faced with entrenched gaps in the labor market and a WTO no longer fit for purpose. But the result has been a scattershot attempt at flash industrial policy—subject to special interests, distaste for more durable, multilateral solutions, and squabbling among senior policymakers, whether Beijing is a dealmaker, a foe, or both. It’s hard to imagine hardliners would have succeeded in issuing an executive order ostensibly banning TikTok and WeChat had the coronavirus not made China a scapegoat. Without the pandemic, others in the administration could have pressed for Phase 2 of trade negotiations. Instead, the current political environment drove the normally technocratic investment screening process that examined the TikTok case head-on into the electoral cycle.

So what’s the first lesson for an administration interested in avoiding short-term, reflexive policy band-aids? The most important thing—the key dependent variable—is that conversations about “sovereignty” do not lapse into special interest or lobbying, and to define a permanent, consistent role for the private sector in public policy. Corporations and financial market participants may soon be asked to take part in national security deliberations in ways they haven’t before—from digital currencies to artificial intelligence to renewable energy just to name a few—and enter an innovative feedback loop with the government. The traditional lobbying exercise will become less meaningful for firms that have found their way, constructively, into the national security debate and if they play a role in policy execution. But in order to bring firms into the fold, they must get equal hearing in a public sector that avoids handing out benefits to its friends.

US decision-making will also reflect the economics of its closest partners who are grappling with similar dilemmas over protectionism and industrial policy. The European Union must ensure that any loosening of its competition rules is not an excuse to pay favors to industrial darlings or “national champions” to the detriment of smaller, competitive firms. Compromise in Brussels often amounts to “a little something for everybody,” but this brand of peacemaking might prove inefficient when making sector-specific “strategic” decisions. Current efforts to streamline the bloc’s export control regime are a step in the right direction, as would be a cross-border carbon adjustment tax, if it gets past its detractors. When the European Parliament greenlights the latest multi-year budget, the disbursement of funds earmarked for R&D and energy transition will be a key litmus test whether these allocations are “strategic” investment or new branding for cohesion funding, which is hardly known for market-efficient allocation on the member state level.

The path is already paved with some bad examples on both sides of the Atlantic. Decrying the EU’s messaging on strategic autonomy in a recent issue, The Economist recalled former French Prime Minister Dominique de Villepin’s claim that dairy giant Danone was a strategic asset when it was faced with an American buyer. It’s easy to poke fun at this, but it’s clearly not a uniquely French risk. Large German corporates certainly show their swagger in Berlin, lamenting the success and resilience of Silicon Valley. And in Washington, a 232 ruling on European automobiles, one of the current administration’s recurring trade bulldogs, is like protecting Danone—capricious, and with little economic reasoning behind it. There are no “rules of the road.” And if there were, who could be sure leaders would follow them?

The next US administration will have to pick up the pieces of this experiment, hopefully in close consultation with the EU and other like-minded global economies. Economic liberalism is taking a strong thwack to its broadside, now more associated with empty manufacturing towns and the merciless effect of COVID-19 on employment rather than the clean-cut lines our trade theory classes taught us. The path to a modified form of globalization, whatever that may be, will be rocky and populated by market externalities and hot tempers, whoever is at the helm of the ship. But several instructional pieces of work are currently underway.

The Commerce Department’s Bureau of Industry and Security, the arm of the agency that implements export controls and the 2018 Export Control Reform Act, has extended the comment period on its proposed rulemaking “Identification and Review of Controls for Certain Foundational Technologies” through next month. Peeling back the regulatory-speak, this move within the US government will help define the line between economic security and protectionism. Why? Commerce has asked the private sector to help identify industries and critical technologies that warrant regulatory protection, and implicitly, those that do not. The administration has also released this month a “National Strategy for Critical and Emerging Technologies,” calling for the promotion of the “national security innovation base” and to “protect technology advantage.” Aspirational in scope but with little flesh on the bones, the paper nonetheless sets a trajectory that a new administration is unlikely to question.

The determining factor here is whether the government, firms, and investors view innovation from the traditional military-industrial perspective that gave us the internet (as the latter document concludes) or part of a broader effort at job creation. That is, will a new industrial policy prioritize geopolitical tensions or domestic economic welfare? Or can it do both while avoiding protectionist practices that could stop the bleeding today but over the longer term undermine the competitiveness of the US economy? Washington will need to see the end of the current economic crisis before it can answer that last question.

Julia Friedlander is the C. Boyden Gray senior fellow and deputy director of the GeoEconomics Center at the Atlantic Council. She has served as senior policy advisor for Europe at the US Treasury and director for European Union, Southern Europe, and Economic Affairs at the National Security Council from 2017 to 2019.

A new transatlantic partnership will be necessary whatever the result of the US election because the EU-US trade relationship, the European and US approach to multilateralism, and the global balance of power have changed.

Image: US President Donald Trump points to a "made in the USA" sign as he tours medical equipment distributor Owens & Minor during the coronavirus disease (COVID-19) pandemic in Allentown, Pennsylvania, U.S., May 14, 2020. REUTERS/Carlos Barria