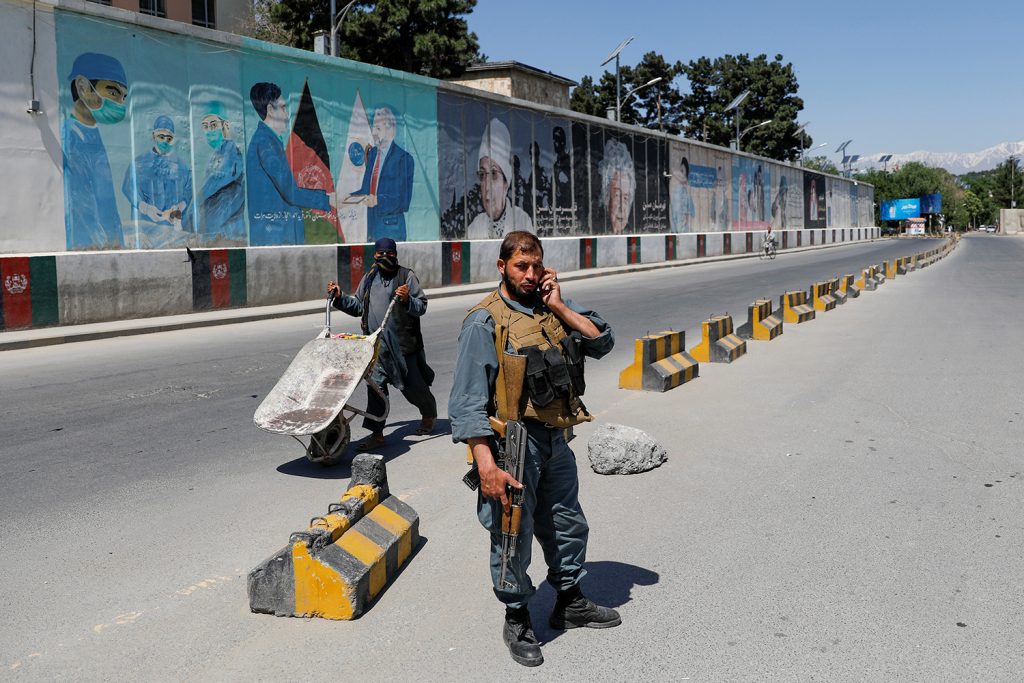 Caught in a vortex of coronavirus fears, economic stagnation, and public uncertainty about the future—and on the heels of unprecedented violence during the holy month of Ramadan—Afghanistan finally experienced a political breakthrough and a three-day ceasefire after months of wrangling over the results of the 2019 presidential elections and increased fighting. Despite sporadic clashes and loss of life, the Eid ul-Fitr ceasefire decision, initiated by the Taliban and embraced by Kabul, was followed up by a tacit understanding that cessation of hostilities will be informally observed for a few more days while both sides continue to release prisoners.

The burst of political momentum was highlighted by a decision by the Afghan government and the Taliban to resume gradual prisoner exchanges that some hope may pave the way for intra-Afghan talks—probably to be held in June according to Afghan and diplomatic sources—if immediate challenges can be addressed through consensus and confidence-building measures.

It took several weeks of persistent mediation, led at times by former president Hamid Karzai, to convince the two presidential election contenders, President Ashraf Ghani and Dr. Abdullah, to agree to a power-sharing arrangement where Ghani will preside over the executive and Abdullah will lead the peace portfolio. Despite claims of electoral irregularities and internal factional objections within both camps, three other factors contributed to the political breakthrough: serious threats of aid cutoff by donors, mounting regional pressures, the spread of the coronavirus, and increasing economic hardship and poverty.

Although the distribution of posts and new appointments are still being worked out, a soon-to-be-named high council of prominent leaders is expected to provide strategic guidance and advice. However, there are lingering questions as to who exactly has the final word on crucial peace negotiations and more-war decisions. A lack of consensus or inclusivity can either prolong the conflict or become a stumbling block weakening Kabul’s hand in future negotiations.

Abdullah, who now heads the High Council for National Reconciliation, has to restructure or merge the existing peace sub-institutions into a functioning and competent organism that can engage and coordinate domestically and externally by juggling the various political agendas through consultation and consensus-building activities. He also needs to get the Taliban to agree to the terms and conditions necessary to kickstart talks. For their part, the Taliban have not voiced opposition to the latest developments in Kabul and are instead for now focused on getting their prisoners released.

Challenge 2: The US political and election calendar

While Afghans grapple with the timing and politics of peace-making, the Trump administration, under increasing pressures from mounting losses caused by the coronavirus, dire economic prospects, and mindful of public pressures ahead of November elections, is reviewing new options presented by the Pentagon on pre-election troop pullout plans. President Donald J. Trump, who has agreed to a complete pullout by May 2021 as part of an agreement signed on February 29 with the Taliban, is threatening an early withdrawal before elections to make good on his campaign pledge to end the Afghan war. On May 27, he tweeted that “after 19 years, it is time for them [Afghan forces] to police their own country.” Other voices within the administration have offered a menu of choices that range from a smaller residual force by election day to sticking to the bilateral agreement numbers and timelines.

A revised decision for an early or late withdrawal will directly impact the pace and thrust of the peace process as well as positions taken by other stakeholders inside and outside Afghanistan. At this stage, US envoy Zalmai Khalilzad is pushing for an early start to intra-Afghan talks, but other prerequisites, especially the full release of up to 6,000 prisoners by the two warring sides (5,000 Taliban members in exchange for 1,000 government detainees), are holding back the dialogue between the Taliban and the Afghan regime. To date, less than half the total number has been exchanged as part of confidence-building measures.

If Trump makes a hasty decision for early withdrawal or the status quo of war persists, then the prospect for talks could sink unless all sides agree that a qualified and influential international mediator be assigned to pick up the pieces and try to cobble together a new effort aimed at a political settlement. An honest broker or team of mediators acceptable to Afghans and key players will need to, on one hand, help relevant Afghans sit around a negotiating table, and on the other hand, coordinate and facilitate international and regional buy-in for a guaranteed settlement.

The Taliban, believing that they have scored a slam dunk on February 29, have been consistent and insistent with their strategy to force a prisoner exchange to weaken Kabul’s leverage and show political resolve to their own fighters on the battlefield, while trying to adhere to the bilateral commitments with the United States by avoiding face-to-face confrontation, and instead resorting to attacks on rural government outposts. However, as witnessed during Ramadan, there are suspicions about fringe or extreme groups either acting independently or affiliated with the Taliban who act as spoilers, fifth columnists, or deception agents staging spectacular attacks often targeting civilians.

Mindful of the US political calendar, Ghani’s reactive military offensive, and rifts within Kabul’s political edifice, it is not clear whether the Taliban will soften or harden their terms regarding talks once the prisoner exchange issue reaches an acceptable threshold. There is a possibility that if and when all sides agree to the modalities and the process moves towards the intra-Afghan stage, talks may resume in two phases: dialogue based on formal exchanges, followed by negotiations over the future of the country and power-sharing. Internal Taliban deliberations, US diplomatic pressure, and/or Pakistani leverage over the Taliban could at that point influence the next steps.

The other challenge faced by the more ideological and extreme fringes of the Taliban is their commitment to not only severe ties with al Qaeda and other anti-Western terrorist groups, but also to play a role in denying them space inside Afghanistan. As US forces continue to withdraw, the mainstream Taliban will face pressures from within as well as from anti-Taliban special interest groups to prove that they will adhere to their pledge or be branded as spoilers.

Afghanistan’s key regional and international stakeholders are also watching and adjusting their positions as events unfold on the ground and in key capitals. Aside from the European Union, the United Nations, and NATO, which have pushed multilateral agendas since the political impasse last year, others like the potential future hosts of intra-Afghan talks (Qatar, Germany, Norway, and Indonesia), as well as regional groupings such as Russia, China, Pakistan, and Iran have expressed opinions that convey a sense of concern mixed with a desire to see the peace process move forward. The appointment of Hanif Atmar—a 2019 presidential contender who suspended his campaign prior to elections—as foreign minister and the political deal with Abdullah’s coalition are indications that Ghani is uneasy about growing regional frustrations and aims to restore trust and help shape a new consensus. While India, Saudi Arabia, and the UAE have supported Ghani’s position, others like Russia, Iran, and Pakistan have called for a broad-based approach to engage the Taliban and reduce the US footprint as part of an orderly disengagement.

Sitting at a new crossroads, Afghanistan is once again tilting between an opportunity to take the path to peace and a political settlement—hard as it may seem—or to bounce back on the path of more violence and conflict with no end in sight. Strategies and decisions in Kabul, Washington, and several other capitals in the weeks to come will determine the utility or futility of those paths. However, a Plan C for an inclusive settlement via international mediation will be needed as part of Afghanistan contingency planning. That is the least all the sides owe the Afghan people after forty-two years of conflict and violence.

Image: An Afghan policeman stands guard at a check point during Eid al-Fitr, a Muslim festival marking the end the holy fasting month of Ramadan, amid the spread of the coronavirus disease (COVID-19), in Kabul, Afghanistan May 24, 2020. REUTERS/Mohammad Ismail