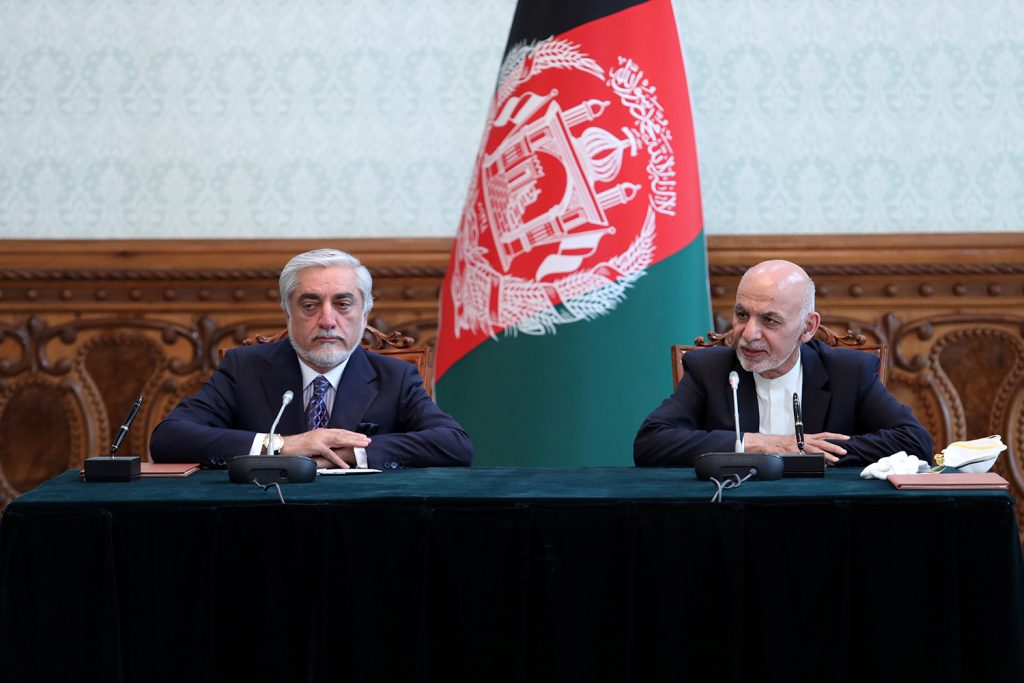 With the tentative peace deal under fire, continuing havoc wreaked by the COVID-19 pandemic, and a looming US troop withdrawal, the breakthrough in the Afghan government’s political deadlock which emerged on May 15 will undoubtedly be welcomed by many in Afghanistan and the international community. Key provisions in the agreement—which sought to end a political stalemate after both President Ashraf Ghani and former chief executive Dr. Abdullah Abdullah claimed victory in a September presidential election—include power sharing structures designed to reflect the interests of both Ghani and Abdullah, as well as pulling voices from many segments of Afghan society directly into the political fray and the reconciliation process.

As the government continues to work through political differences and unite behind the preservation of Afghanistan’s republican institutions, it remains yet to be seen how rivals to its democratic consolidation, chiefly the Taliban, will react to the newfound strength and resolve of a unified Afghan government.

Experts from the Atlantic Council’s South Asia Center analyze the breakthrough political agreement, the role of the United States in the peace process, and the ramifications of a united front against the Taliban:

“As US ambassador to Afghanistan, I was intimately involved in the talks on resolving the outcome of the 2014 elections and on the agreement creating the National Unity Government. I know how difficult the discussions over the past several months among President Ghani, Dr. Abdullah, and Afghanistan’s political and civil classes have been. Now that President Ghani and Dr. Abdullah have reached an agreement on the way ahead, they are to be commended for their statesmanship in putting the national interest ahead of their own, and on finding a solution which offers the prospect, if not the certainty, of building a national consensus at this most crucial of times for Afghanistan. Implementation will be fraught with difficulty, but all Afghans now have the opportunity, indeed the responsibility, to unite in determining the future their country and in testing whether a peace agreement with the Taliban, on terms that most Afghans can accept, is possible. It’s not at all clear that it is. But if the Taliban are to conclude that they cannot simply prevaricate, continue the violence, and bide their time until the United States leaves, the Trump administration will have to make clear that there is now an Afghan address for negotiations, and that the United States will condition its withdrawal of forces on the progress in, and conclusion of, those negotiations.”

“The agreement between Dr. Abdullah Abdullah and President Ashraf Ghani represents the basic and enduring truth of Afghanistan: Afghans have the best solutions for their problems. Working together they can withstand internal and external conflicts. But a peaceful Afghanistan is a tall mountain. Let us hope this agreement is not a false crest. They key role for the United States must be to ensure sustained economic aid for Afghanistan and its emerging national government and to assist it in working with all its neighbors, especially Iran and Pakistan, to achieve a practicable agreement with the Taliban. Both would benefit from a peaceful Afghanistan. We must try to remove the blind spot that the United States has on Iran. The regional aspect is critical to ensuring peace and stability in this war-torn country.”

“The signing of Ghani-Abdullah political agreement that ended the months-long political impasse between the two sides set a good example in political compromise in Afghanistan. The agreement demonstrated that Afghan leaders are capable of showing extreme pragmatism to make hard tradeoffs and compromises. It also emphasizes the fact the Afghans can manage to settle their disagreements among themselves without seeking external mediation—even though interventions from Turkey and Iran, plus lurking US aid pressure, played a role in making the deal happen.

“Indeed, the deal is not perfect nor was it expected to be, but it is ‘good enough’ despite its flaws. However, unlike the 2014 US-brokered agreement, the encouraging part this time is that because it is an entirely Afghan-negotiated deal, the Afghan leaders fully own it, whether it works or not.

“This is an inflection point for Afghanistan. As Afghans struggle with increased Taliban and militant violence, the government is faced with an acute economic challenge and a fiscal deficit amidst soaring poverty and unemployment rates as well as shrinking foreign assistance. For now, an immediate challenge for the Afghan government is to prepare for the November donors’ conference in Geneva, where Afghanistan partners are expected to pledge their continued development support to the country. Hence, the agreement comes at the right time and provides an important first step in a continuing exercise to bring the Afghan political class together to assume/share the growing burden of responsibility and better manage the country. As a country, Afghanistan has moved on, but most of the country’s leadership has lagged behind. As Afghanistan navigate through this decisive period, it is about time Afghan leaders realize that simply holding inflated titles or occupying fancy villas and retaining expensive protocol is no longer tenable.”

“Afghans who are still reeling from the horrific attacks last week, which targeted mothers, infants, and mourners, will welcome steps towards resolving the long-running political gridlock and uncertainty. Afghanistan today faces a resurgent Taliban, the spread of a deadly virus, and millions facing food shortages and hunger. While this desired political agreement brings much looked-for unity, vital in order to facilitate intra-Afghan negotiations, any resulting government needs to effectively govern and make merit-based appointments. This deal should not be about reaffirming titles, positions, and resources for the political elites. Instead, it should focus on building a genuine partnership that prioritizes, represents, and addresses the urgent needs of the Afghan people, who cannot afford to continue with the status quo.”