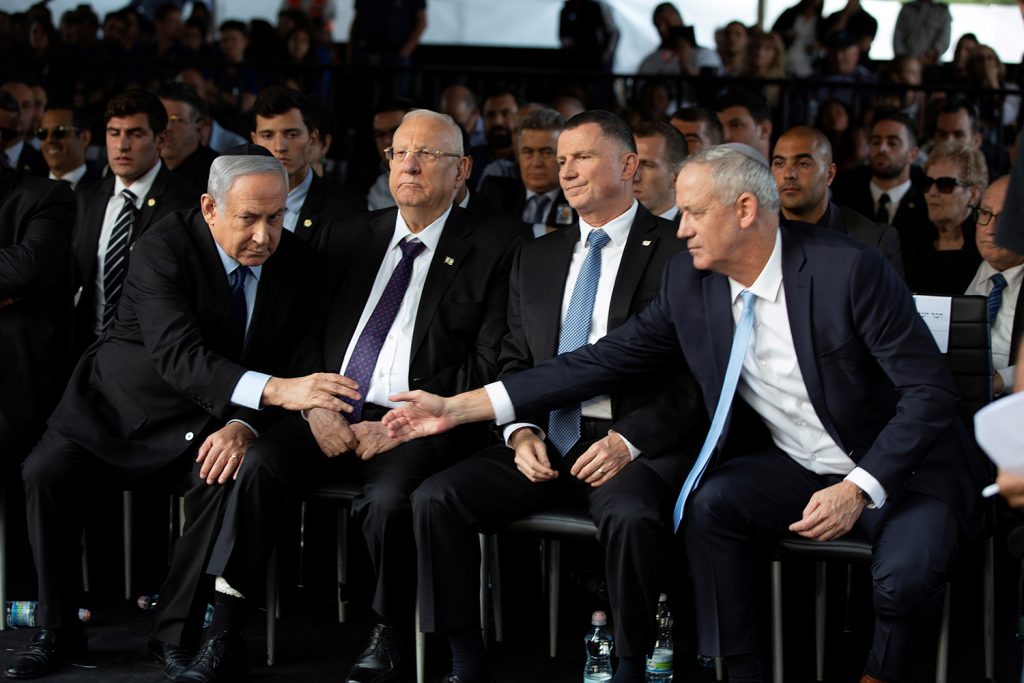 Twelve months, three elections, and one pandemic later, Israel’s political saga has ended. On April 20, Prime Minister Benjamin Netanyahu and opposition leader Benny Gantz signed an agreement outlining the conditions on which to form the country’s next government. Chief among its terms is the provision that Netanyahu will continue serving as prime minister for eighteen months before Gantz takes the reins. The deal also allows Netanyahu to introduce legislation this July that would annex parts of the West Bank.

Both politicians had spent the last several weeks attempting to come to an understanding on a national unity government to fight coronavirus. Having repeatedly abjured ever serving under his indicted rival—whose corruption trial is slated for May 24—Gantz broke his election vow on March 26 and in the process caused his formidable Blue and White coalition to disintegrate. A major issue in the ensuing cross-party negotiations was Netanyahu’s legal troubles and the influence of the Israeli judiciary.

“Many Israelis, however, voted three times to end Mr. Netanyahu’s seemingly endless tenure as prime minister. Assuming the emergency unity government holds—far from a safe assumption— they will now have to wait up to eighteen months for Netanyahu (battling legal troubles) to yield the premiership to Gantz, who will reportedly now be appointed minister of defense. Gantz enters government with much of his Blue and White alliance in the opposition, having accused him of betrayal by making common cause with Netanyahu. If the Netanyahu-Gantz arrangement lasts long enough for the premiership to rotate to Gantz in eighteen months, presumably the former general will want in the meantime to rebuild his electoral base to be able to govern effectively if and when the time comes.

“The implications for the United States and for US President Donald J. Trump’s ‘Deal of the Century’ peace plan are perhaps too early to assess with any degree of reliability. Ideally Gantz would apply the brakes to any Israeli move to annex parts of the West Bank unilaterally. Donald Trump is just as entitled as President Bill Clinton was (in January 2001) to set forth his vision of what a proper solution to the Palestinian-Israeli dispute might look like. What cannot be erased or avoided, however, is the fact that mutual agreement between the parties to the dispute is the sine qua non for an agreement to be honored and sustained over time. Ideally Gantz’s presence in government will encourage Washington to provide the mediation services both sides need to resolve their dispute.”

“The signatures of Prime Minister Benjamin Netanyahu and his main challenger, Blue and White leader Benny Gantz, on an agreement to join in forming Israel’s next government—almost sixteen full months after the first of three consecutive ballots was called back in December 2018—signal the imminent resolution of the country’s electoral stalemate. Clear sailing is far from guaranteed however.

“With their two parties on board, Netanyahu and Gantz—who are to serve as successive prime ministers, with the former scheduled to hand the baton to the latter in late 2021—will now proceed to negotiations with other potential partners to their new coalition. Addressing their conflicting demands will produce no small degree of tension. Also waiting in the wings for their cuts of the pie will be members of Likud and of Blue and White, some of whom are certain to be disappointed with their designated roles in the incoming government.

“More critically, Netanyahu and Gantz emerge from this process with deep political scars. Trust between them is palpably low, providing a sub-optimal backdrop for their shared management of national affairs. Treatment of weighty matters such as judicial reform and the implementation of President Donald Trump’s ‘Deal of the Century’—with its promise to recognize the extension of Israeli sovereignty to areas of the West Bank—has been prescribed, in writing, by the terms of the Netanyahu-Gantz deal, but it would be surprising for disagreements not to arise and threaten the stability of their partnership when the time arrives to take practical actions. The views of the two protagonists, after all, differ on certain critical issues.

“Illustrative of the thin ice upon which this latest breakthrough is written is the stipulation that, if Israel’s Supreme Court now disqualifies the indicted incumbent from continuing in his post and heading up this new government, Israelis will be summoned back to the polls for the fourth time in just over one year.”

“The formation of a ‘national emergency’ unity government marks the end of a year of uncertainty and stagnation in Israel. The terms of the agreement are a striking victory for Netanyahu—who despite failing to win at the polls, flexed his unmatched political shrewdness to secure another win for both himself and his party. By contrast, Gantz has forgone a litany of campaign promises, including sitting with an indicted prime minister and committing to support annexation in the West Bank—all in exchange for weakened ministerial posts for himself and his now fractured party in the most bloated government in Israel’s history.

“This discordant new government, united by its desire to avoid another election and to address the coronavirus threat—will no doubt be riddled with infighting. But Bibi will remain the supreme leader—setting the tone and tenure for foreign policy that is likely to stay the course despite its more centrist coalition—unless Israel’s Supreme Court says otherwise. Relations with the US administration will remain strong—but Bibi would be wise to tread lightly as the United States heads into an election in November, including dispatching Gantz to engage Democratic interlocutors.”

“The Gulf states remain heavily focused on combating the spread of COVID-19, as well as the impact of collapsing oil prices, so the drawn-out effort to form a national unity government in Israel is generating much less public attention than would otherwise be the case. Nonetheless, it is possible to discern a bifurcated reaction, with media commentators critical of Netanyahu’s announced plans to annex at least some parts of the West Bank while at the leadership level, the formation of the Israeli unity government is likely perceived as a stabilizing factor for the region at a time of great uncertainty. In these conditions, continuity is a virtue.

“For most Gulf leaders, Netanyahu has become a familiar figure who is quietly credited with having handled the turmoil of the Arab Spring with great caution and restraint. While there is concern about the possible consequences of Netanyahu’s embrace of the Trump administration’s peace plan, these concerns may be balanced by appreciation for the Israeli prime minister’s implacable opposition to Iran’s efforts to project power across the region as well as his sustained efforts to promote Israeli ties with the Gulf states. In this context, Benny Gantz appears as an unproved newcomer who now has eighteen months to establish his own connections before assuming the prime ministership, assuming the rotation actually takes place as agreed. Internal Israeli issues such as the corruption charges Netanyahu faces and his efforts to undermine the judiciary are seen as internal Israeli issues. Even Netanyahu’s periodic rhetorical attacks on Israel’s Arab minority do not seem to have much effect on Gulf attitudes toward his leadership.

“It is unclear to what extent [Palestinian Authority President] Mahmoud Abbas’s efforts to mobilize opposition in the Gulf to any annexation of West Bank territory will have significant impact. Netanyahu and Gantz’s agreement to defer this issue to the summer and to require US government consent before taking any steps may turn the focus of Arab attention to Washington. So while it is too soon to say what the direction of the new Israeli unity government will be, Gulf leaders likely are quietly pleased to see Israel’s prolonged political impasse resolved and Netanyahu still in power, at least for the time being.”

The United Nations Interim Force in Lebanon (UNIFIL)—now beginning its forty-third year of “interim” service in southern Lebanon—recently intervened to defuse an armed standoff between Israeli and Lebanese soldiers along the “Blue Line:” The line of Israeli withdrawal from Lebanon demarcated by the United Nations in 2000. These confrontations occur periodically. Why?

Israel exemplifies how to respond to the coronavirus

Israel’s stringent policies may help enlighten other nations in search of answers.

Israel’s new prime minister must reckon with the Democratic Party

By March 3, the new Israeli prime minister will have a preview of one of the first challenges he’ll have to address: a reckoning with the Democratic Party.