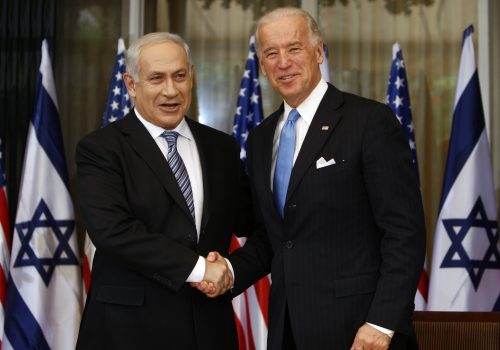 Netanyahu must adapt to the new Washington

The 2020 US presidential election may be the splash of cold water needed to chasten Israeli Prime Minister Benjamin Netanyahu.

Arbit in The Hill: “Biden needs a special envoy for Middle East normalization”

Carmiel Arbit is a nonresident senior fellow for Middle East Programs at the Atlantic Council. Her research focuses on US-Israel relations, the peace process, Israeli and Palestinian politics, Congress, and broader issues affecting the Middle East.

A co-founder of Key Bridge Strategies, she has consulted for non-profit organizations around the world, advancing public diplomacy, government relations, and community engagement strategies in the United States, Israel, Palestine, Cyprus, Sudan, Sri Lanka, and Mexico.

She was previously the Director of Strategic Engagement in AIPAC’s office of Policy and Government Affairs in Washington, where she helped drive the organization’s strategy for engaging key policymakers and influencers. Prior to her time at AIPAC, she worked at the Brookings Institution’s Center for Middle East Policy. Her research there focused on Israel, counterterrorism, and international security. She has worked in government affairs and public diplomacy for the American Jewish Committee, Thomson Reuters and Penn Schoen and Berland Associates. She began her career on the international desk of the H.L. Education Center for Peace – Geneva Initiative in Tel Aviv, where she worked to bring together Israeli and Palestinian stakeholders in support of a two-state solution.

Arbit earned her BA from George Washington University and her MS from Georgetown University’s School of Foreign Service. She has been recognized as a top Foreign Policy Influencer by Diplomatic Courier. She is also a Truman national security fellow.