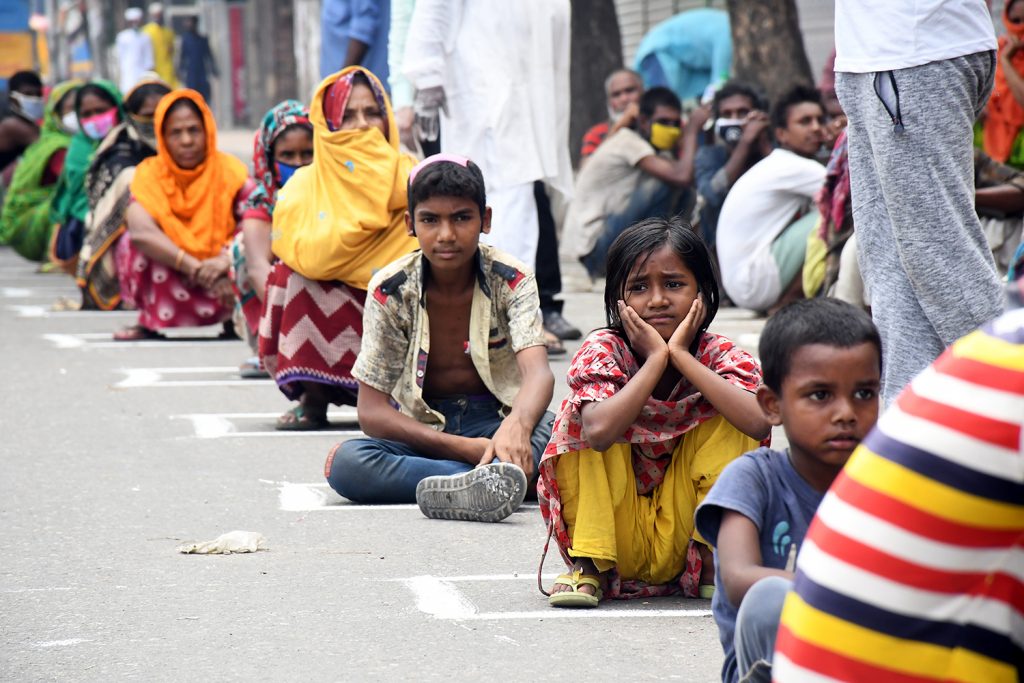 The extent of the impact of the coronavirus crisis on the economy is likely to be enormous because the economy was already in a downturn before the virus hit the nation—the pandemic is estimated to impact 40 percent of the $310 billion economy. The Economist Intelligence Unit (EIU) has projected a steep decline in the next year’s GDP growth, to less than 4 percent.

On top of the potential problems associated with the disbursement of working capital to both large industries and SMEs—particularly due to the liquidity crisis of the commercial banks and default culture— these packages have left the most vulnerable sections of society to fend for themselves and importantly ignored four critical areas. These areas are the informal sector, the public health care system, returned migrant laborers, and agriculture.

The government’s stimulus plan has no allocation for the informal sector, in which 87 percent of the workforce is engaged. It was imperative to devise some form of cash transfer mechanism to help this workforce in both the short and medium terms. According to the Bangladesh Bureau of Statistics (BBS), of the 25 million workers who work on wages and salary, at least 10 million are dependent on their daily incomes. There are 5 million people employed in industries whose situation is nothing different from daily laborers. A rough estimate will be around 20 million people whose livelihoods have been affected in the past weeks since the partial lockdown began on March 25.

The situation is likely to worsen in the coming days. The desperation of poor workers was on display when thousands of readymade garment (RMG) sector workers defied the government lockdown and walked hundreds of miles to save their jobs at the prodding of the factory owners, prompting a sharp rebuke from the public. The RMG sector has been hit hard due to cancellation of at least $3 billion in orders and reportedly almost a million workers have lost their jobs. While the government offered $590 million in low-interest loans to the factory owners, differences between the owners and the Central Bank on the conditions of disbursement have left most of the workers unpaid.

The government insists that the poor and extreme poor will be covered under the expanded safety net VGD programs, especially with low cost rice, flour, and pulses, and the distribution of rice through the VGF program. But lack of cash and the misappropriation of relief supplies by ruling party activists are disturbing. Besides, middle class salaried people, who will neither qualify for the relief nor will be helped by their employers, will still be in a difficult predicament. The plight of the poor and middle class will worsen with Ramadan beginning at the end of the month.

The government seems to have overlooked the public healthcare dimension of the crisis, despite the climbing number of affected people. The government’s late acknowledgment of the gravity of the situation, the limited amounts of tests, the absence of a mechanism to enforce social distancing in the overcrowded country, the lack of awareness among citizens, and religious leaders’ unwillingness to discourage congregations have created a time bomb.

Yet, the government did not mention any new funds to the public healthcare sector. The entire health care system, which is already overburdened, is on the verge of collapse for two reasons. First, there are inadequate amounts of hospital beds and necessary equipment to deal with regular patients, let alone with patients with COVID-19 symptoms. With eight hospital beds for every ten thousand people, the situation was already dire before the pandemic. On top of that, there are shortages of ventilators; of the total five hundred listed in the official documents, many are not in working condition.

Second, the trust deficiency between healthcare professionals and the government is threatening to become even more strained. Many doctors and private hospitals are afraid that they may expose themselves to the virus due to the low number of tests (about four thousand until March 7) and consequently are refusing to treat patients. The government allocated an additional $29 million late last month for the health ministry from the existing budget for a COVID-19 preparedness and response plan. Hasina’s announcement of an insurance plan and incentive scheme for healthcare workers is a welcome development, but whether her stern warning of severe punishment for dereliction of duties will be enough to gain the confidence of the doctors is an open question. Besides, this hardly addresses the healthcare sectors’ immediate needs.

Remittances, which contribute to 12 percent of the GDP, have already experienced a sharp decline. Almost a million migrant workers who had temporarily traveled to the Gulf nations and Southeast Asia, many for low skilled work, have returned in the past months and the Bangladesh government is under pressure to take them back. As remittances are one of the two main sources of Bangladesh’s revenue, the decline will put a serious drain on the economy on one hand, while on the other almost 2 million people will be added to the list who will need the support. It is quite baffling that the government is yet to devise any response to this emerging situation.

The lack of support to the agricultural sector could also create a new crisis. With prices of produce dropping, farmers across the country are already bearing losses, and the absence of transport facilities are hindering the availability of perishable foods on the market. This is already affecting the food security of a large number of people, and it will only get worse; yet the absence of an incentive offered to the agricultural sector in the stimulus package is surprising.

It remains a matter of serious concern whether the government can work out a method to implement these packages soon and administer them with transparency and accountability; but leaving the most vulnerable people behind raises disconcerting questions about the priorities of the government. Unless the larger number of people and those on the bottom can benefit from the relief measures, Bangladesh will not be able to recover from this imminent crisis. To do so, the government needs to act quickly.

Image: Bangladeshi street peoples gathered to collect foods sit in lines, adopting social distancing rules as they received relief materials provided by local community during the nationwide lockdown as a preventive measure against the COVID-19 coronavirus pandemic in Dhaka, Bangladesh on April 3, 2020. (Photo by Sipa USA)