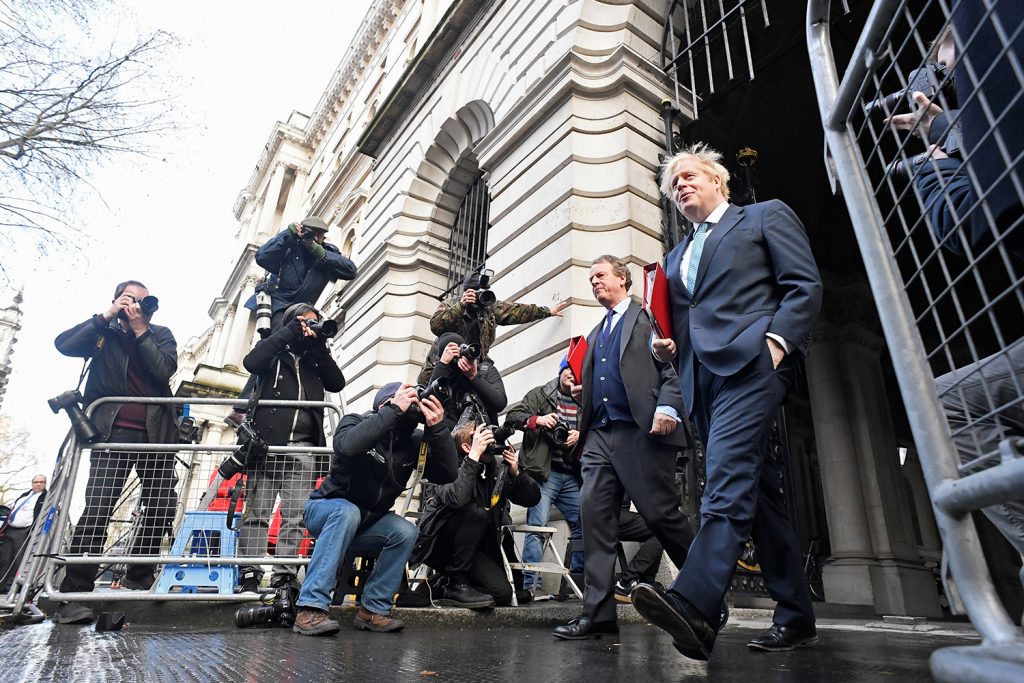 Though the world, cut off behind travel bans, has perhaps never felt further away for millions of Britons, one thing has changed in Whitehall over the course of this COVID-blighted winter: It can no longer be said that the only foreign-policy debate in the United Kingdom is about Brexit. With the launch this week of a major new report by the British think tank Chatham House, titled “Global Britain, Global Broker,” there are now two distinct visions emerging of Britain’s role in the world: one positioned in the political center and the other on the right.

First, let’s tackle the Chatham House version, expressed in an impressive study that is likely to become the post-Brexit foreign-policy manual for British centrists. Proponents of this paradigm urge the United Kingdom to be a problem-solver and remain closely in sync with the European Union (EU) on foreign policy—in order to achieve global goods on matters ranging from climate change to corruption and tax avoidance. At the heart of this vision is an assessment that the United Kingdom is operating in a sharp-elbowed but ultimately collaborative world. Chatham House Director Robin Niblett, who authored the think tank’s study, argues that “rather than try to reincarnate itself as a miniature great power, the UK needs to marshal its resources to be the broker of solutions to global challenges.”

According to this framework, Britain’s place in the world will be proved not by its decision to dispatch the HMS Queen Elizabeth aircraft carrier to the Indo-Pacific region, but rather behind the scenes in international summits. The critical test in 2021 will come in the form of two summits hosted by the United Kingdom: the Group of Seven (G7) gathering and the United Nations Climate Change Conference in Glasgow. The United Kingdom’s success is to be measured by its ability to shepherd various actors—the EU, the United States, Japan—into new international regulatory initiatives where, in each case, London can have a seat at the table that it might not have occupied otherwise. In this framework, the many challenges associated with an ascendant China loom as an issue here. But China isn’t the issue.

Next, the vision espoused by Policy Exchange. Last November the British think tank convened a distinguished Indo-Pacific Commission chaired by former Canadian Prime Minister Stephen Harper and issued an interim report entitled “A Very British Tilt” with a foreword by former Japanese Prime Minister Shinzo Abe. It’s another richly detailed report, full of finely crafted policy prescriptions. In this case, the United Kingdom is urged to tilt its foreign policy—measured in terms of both diplomacy and hard power—toward the Indo-Pacific in the context of a rising China. At the heart of this vision is great-power competition with Beijing, where it matters that Britain is dispatching the HMS Queen Elizabeth to the Indo-Pacific. The British right, with its more pessimistic reading of contemporary geopolitics, has been consulting its own manual for a while now. Here China is the issue.

One area where these visions seem to clash is over India. The more values-first Chatham House vision cautions the United Kingdom against over-investing diplomatically in India due to the democratic backsliding of Indian Prime Minister Narendra Modi’s government. The more realist Policy Exchange vision, meanwhile, advocates for a deeper focus on India in light of competition with China, arguing that there is “scope for a major UK-India reset.”

The India question is particularly relevant at the moment: British Prime Minister Boris Johnson is planning a major trip to India, currently postponed on account of COVID-19, and has invited New Delhi to help form a new “D-10” group of democracies at the upcoming G7 summit. The United Kingdom is also engaging in major vaccine diplomacy in India, where the Oxford-AstraZeneca vaccine is being mass-manufactured with support from UK funds for the World Health Organization’s COVAX program. This effort is a response to the pandemic, but it also hints at how London might turn to India to diversify its critical supply chains away from China. Given that the Johnson government, like Policy Exchange, sees India as a strategic priority, it’s hard not to read the new Chatham House report as a critique of Downing Street’s approach.

These two reports, these competing visions, frame a debate worth having—indeed, a debate that Britain needs to have. But they also leave two big questions unanswered, as fodder for future debate. First, are both British centrists and the British right overestimating the United Kingdom’s capacity for geopolitical maneuvers? And second, in the wake of the Donald Trump era and still very much in the midst of the Xi Jinping era, are they underestimating just how much the world has changed? London is unlikely to definitively answer these questions any time soon. But by the end of 2021, after the United Kingdom has hosted its summits and the HMS Queen Elizabeth has toured the Indo-Pacific, Downing Street should have a better feel for which of these two frames is the most rewarding.

Four years of negotiations. Much political acrimony. The fall and rise (and fall and rise) of British premiers. Through it all, a British public wondering what their future would look like and when they could finally move on from their limbo. A Brexit trade deal is here at last. How should we feel?

What the Brexit deal solves—and what it doesn’t

After more than four years of contentious negotiations, last-minute compromises by the United Kingdom and European Union have finally pushed a post-Brexit trade agreement over the finish line. But the agreement leaves many details open for future disputes.