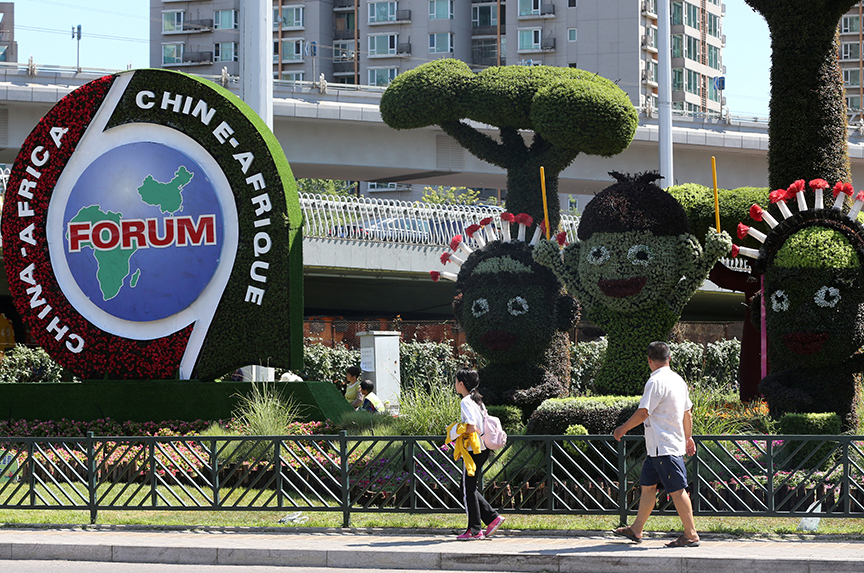 Next week in Beijing, Chinese President Xi Jinping will open the seventh Forum on China-Africa Cooperation (FOCAC), the triennial summit gathering of the People’s Republic of China’s top leadership and their counterparts from all the African states except eSwatini (formerly Swaziland), Taiwan’s sole remaining diplomatic partner on the continent. Numerous African leaders, the chairperson of the African Union Commission, the United Nations Secretary-General, and the heads of twenty-seven international and African regional organizations are expected to attend this year’s summit.

As underscored by the upcoming pageant, there is no denying that a great deal has changed in Sino-African relations since the first FOCAC summit in 2000. During the intervening years, China has gone from being a rather new and relatively marginal actor in Africa with a volume of trade worth only a little more than $10 billion in 2000 to the continent’s biggest economic partner with the total value of exports to the continent and imports from it amounting to more than $170 billion in 2017, a figure that represents an increase of 14 percent from the year before during a period when the commodity price index rose only a modest 7 percent (after having slumped in the wake of the 2008 global financial crisis).

The commercial links are reinforced with extensive diplomatic as well as military engagements, select highlights of which will undoubtedly be showcased during the upcoming summit. Since it first deployed units as part of the United Nations peacekeeping force in 2003 in Liberia, the People’s Liberation Army (PLA) has grown to be the biggest contributor among the five permanent members of the Security Council to blue-helmeted missions in Africa. In addition, since late 2008, the PLA Navy has maintained a continual presence off the continent’s eastern littoral as part of the international effort against Somali piracy; the current three-ship task force (two frigates and a supply ship) is the twenty-ninth to be deployed. These expeditionary forces have provided the rationale for the construction of China’s first overseas military base anywhere, a logistical facility that opened last year in Djibouti, whose proximity to the largest US installation in Africa has already created tensions.

While the external manifestations of China’s presence in Africa have increased in quantity and quality, the internal strategic motivation behind these engagements have also undergone an evolution. Under former Chinese President Jiang Zemin (1993-2003), who hosted the first FOCAC summit, China launched a national strategy of “going out” (zouchuqu zhanlue) which encouraged investments abroad to secure access to stable supplies of natural resources for which the growing demand could no longer be met by domestic production.

Under Jiang’s successor, Hu Jintao (2003-2013), the policy concept became that of China’s “peaceful rise” (heping jueqi) to political and economic “great power” status which, of course, required not only natural resources, but also diplomatic and commercial access—the latter to export the goods which Chinese factories, using the imported energy and primary resources from Africa and elsewhere, turned out at ever-increasing volumes and speed. China’s demand for resources—it is the world’s second-largest consumer of petroleum (after the United States) and accounts for over 40 percent of the global demand for base metals—is reflected in country’s investment portfolio in Africa. While Chinese companies have investments in virtually every corner of Africa, nearly 75 percent of that total is concentrated are in just ten countries: Nigeria, Algeria, South Africa, Ethiopia, the Democratic Republic of the Congo, Chad, Angola, Niger, Sierra Leone, and Cameroon. Moreover, just under half of these investments are in either the energy or mining sectors.

Since Xi took over as general secretary of the Chinese Communist Party in 2012 and president the following year, Chinese grand strategy has been animated by the idea of the “China dream” (Zhongguo meng) of recovering what many Chinese believe to be their country’s rightful place in the world. In Africa, this has meant interests that go beyond access to natural resources and markets to what Chinese representatives will describe as a “new type” of relations, by which they mean they will engage across the continent on a wider spectrum of areas—on an equal footing with what Africa’s traditional partners, including the United States and European countries, have been doing for decades. This approach includes burgeoning developmental initiatives in addition to commercial transaction: currently there are more than 2,500 Chinese development, public works, and other construction projects underway in all but a handful of Africa’s fifty-four countries. China’s engagement with Africa has evolved alongside the country’s global grand strategy and one can say that the former is an important element in the latter.

For Africans, all this presents a great opportunity. Take the case of Kenya, whose president, Uhuru Kenyatta, met with US President Donald Trump at the White House on August 27. After Washington, he heads home to Nairobi to welcome British Prime Minister Theresa May before traveling to Beijing for the FOCAC summit. The increased attention is good news for African countries if they happen to be fortunate enough to be led by statesmen with the competence and vision to leverage it to advance the interests of their countries.

There are, however, significant risks as well, not least of which is the spiraling debt that some countries have run up acquiring Chinese-built infrastructure. Between 2000 and 2014, China loaned African governments and state-owned enterprises some $86 billion, according to one Johns Hopkins University study—and that was before the last FOCAC summit in Johannesburg three years ago, when President Xi announced another $55 billion in new loans and export credits (in addition to $5 billion in grants and interest-free loans). Altogether, China has become Africa’s largest creditor, holding about 14 percent of the continent’s debt, according to the Brookings Institution’s most recent Foresight Africa report. Earlier this year, a senior US State Department official lamented that “a lot of countries in Southern Africa and parts of the east and west are having anywhere from 50 percent to in one case 200 percent of GDP debt. And [between] 80 percent and 50 percent [of the debt] are probably Chinese loans.”

Consequently, the reality of Beijing’s links across Africa is nowadays significant enough and the trends sufficiently worrisome to US policy makers that, for the first time ever, the latest National Security Strategy, published at the end of last year, identified them as a cause for strategic concern: “China is expanding its economic and military presence in Africa, growing from a small investor in the continent two decades ago into Africa’s largest trading partner today. Some Chinese practices undermine Africa’s long-term development by corrupting elites, dominating extractive industries, and locking countries into unsustainable and opaque debts and commitments.” The document went on to zero in on the need for the United States to offer its own economic partnerships to African countries: “We will offer American goods and services, both because it is proﬁtable for us and because it serves as an alternative to China’s often extractive economic footprint on the continent.”

One should not seek a new zero-sum competition on the continent—not least because such an approach would be counterproductive as most African governments and individuals would resent it—but one would also do well to be attuned to the shifting strategic reality of the new Africa that is today emerging.

Image: People walk past an installation set up ahead of the Forum on China-Africa Cooperation (FOCAC), in Beijing, China August 24, 2018. China Daily via REUTERS ATTENTION EDITORS - THIS IMAGE WAS PROVIDED BY A THIRD PARTY. CHINA OUT.