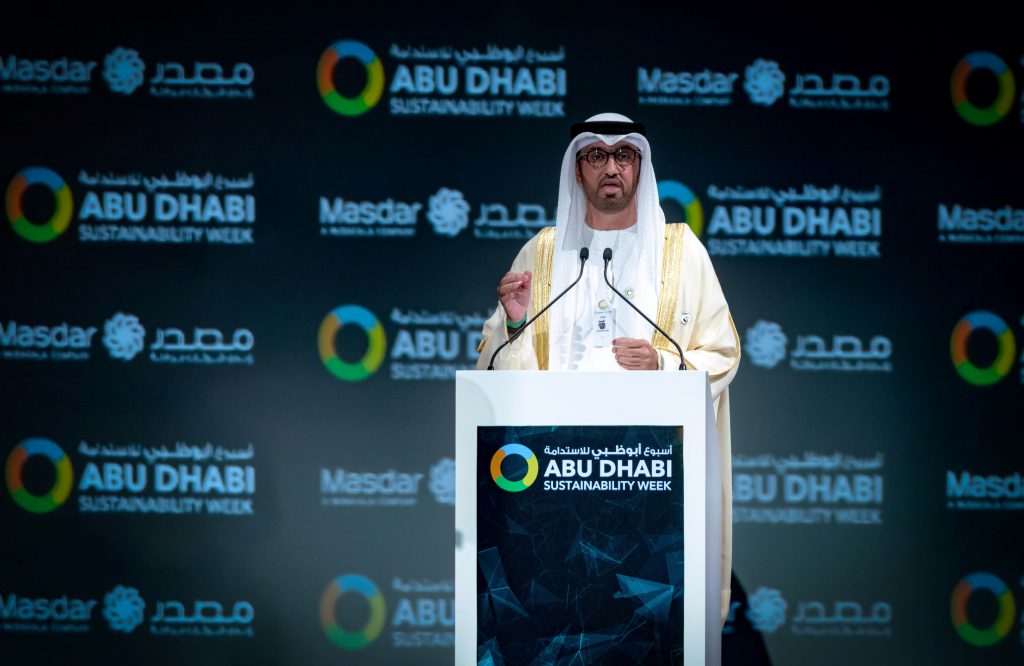 Climate diplomacy, like US President Joe Biden’s Earth Day summit with world leaders this week, “reinforces our real, deep partnership with the US,” said Sultan Al Jaber, the United Arab Emirates’ minister of industry and advanced technology. And through this US-UAE partnership, built in part by a common goal to present climate action as an economic opportunity, “we can turn climate action into real, true, meaningful, [and] tangible results,” he added, during an Atlantic Council Front Page conversation Tuesday with Frederick Kempe, president and CEO of the Council.

Al Jaber, the UAE special envoy for climate change as well as chief executive of the Abu Dhabi National Oil Company (ADNOC), reflected on this partnership shortly after hosting his US counterpart, John Kerry, as well as Alok Sharma, the president of this year’s 26th UN Climate Change Conference of the Parties (COP26), at this month’s first Regional Dialogue Conference on Climate Change in Abu Dhabi.

Al Jaber said he appreciated the fact that the former US secretary of state chose the Arab world for his first visit as a Biden administration official to discuss such a crucial topic.

“This was an opportunity for Secretary Kerry to see the UAE’s climate leadership up close and in person,” said Al Jaber, who took his guest on a tour of Noor Abu Dhabi—the world’s largest single-site solar plant, consisting of 3.2 million solar panels spread across eight square kilometers.

Kerry also visited Masdar City, a $20 billion planned-city project rising out of the southeast of Abu Dhabi that relies on solar energy and is designed to be a clean-tech innovation hub. Among other things, Masdar already houses the headquarters of the International Renewable Energy Agency (IRENA) as well as the Mohamed bin Zayed University of Artificial Intelligence. “In short, Secretary Kerry got a good look at what we are doing in the United Arab Emirates to promote and invest in sustainable development,” he said.

Two joint statements came out of that conference: one aimed at raising regional climate action ahead of COP26, and one between the UAE and the United States calling for a significant increase in renewable-energy investments. From the conference, “it was clear that our region is indeed very much keen, interested, and committed to playing a responsible role in helping advance the global agenda in addressing the climate challenge,” said Al Jaber.

“Progressive climate action is not only necessary; it can also be a true, powerful economic driver,” he said. “If we do it right, it can actually put the world on a new low-carbon, high-growth trajectory.”

Al Jaber noted that in 2020—even as the pandemic devastated the world’s major economies—the world added a record 260 gigawatts of capacity to the global energy grid. That represented three hundred billion dollars in investments, most of it coming from private capital.

“The commercial case for renewable energy has never been stronger,” he said. “This is something we should all be optimistic about and should very much build on.”

Asked why a major fossil-fuel exporter like the UAE—which currently ranks seventh in the world in oil and gas production—would seek a leading role in renewables, Al Jaber said he doesn’t see a contradiction between the two.

“We actually never saw this as a threat, but as a truly unique opportunity,” he said. “I can comfortably tell you that we in the UAE have a comprehensive plan that leverages our expertise in all forms of energy. We build on our experience as a regional pioneer in renewable energy and clean technology.”

The UAE has poured money into projects in seventy countries—from wind turbines in the United Kingdom and solar startups in twenty-seven island nations to wind and solar infrastructure in the former Soviet republics of Azerbaijan and Uzbekistan.

In addition, the UAE is exploring hydrogen as a potential zero-carbon fuel. This resource “is currently in its infancy, but could become a game-changer in twenty years,” Al Jaber predicted. “The key to developing the hydrogen economy of the future will be aligning supply and demand, and developing the value chain connecting suppliers with customers in key markets.”

Even so, Al Jaber said, “the world will still rely on oil and gas for many decades. Given that reality, producers must make that oil and gas as low-carbon as possible.”