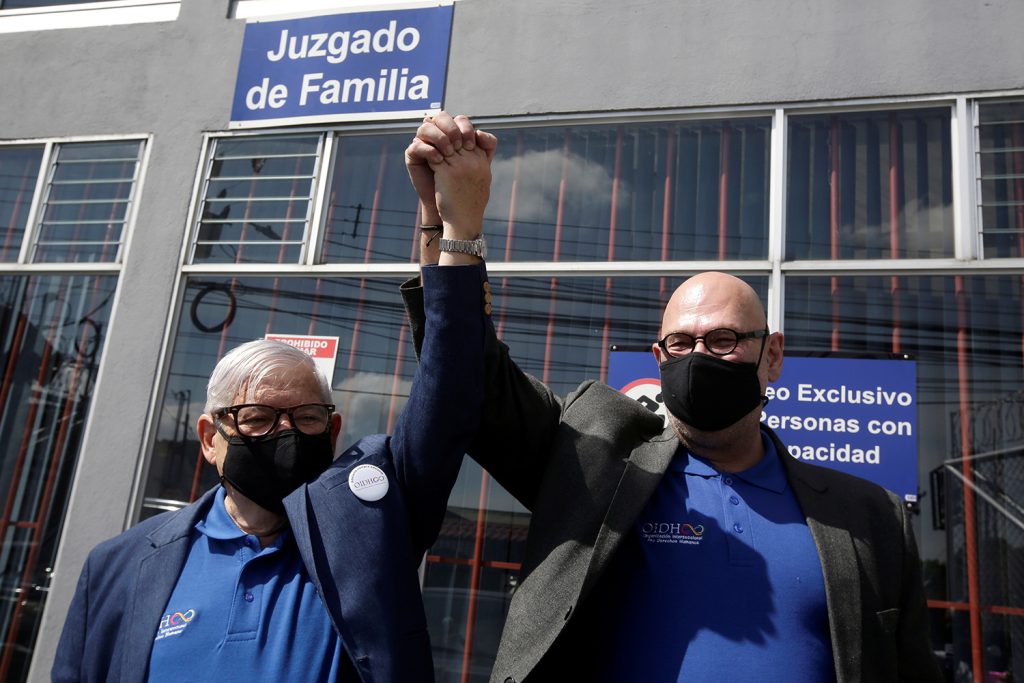 Advocates for marriage equality celebrated in January 2018 when the Inter-American Court on Human Rights (CIDH for its name in Spanish) ruled in favor of same-sex marriage, transgender citizens’ right to change their name and gender, and prohibited discrimination based on sexual orientation. The ruling was released a month before Costa Rica’s presidential elections, which turned into a referendum on these issues with the two top contenders representing opposing views. Eight months later, the Costa Rican Constitutional Court ruled that the country’s ban on same-sex marriage was unconstitutional and would be lifted after eighteen months, if the National Assembly had not passed marriage equality laws by that time.

Despite attempts from legislators to delay the lifting of the ban and disapproval from the Catholic Church, support for this measure is strong from the executive branch and from the public. One of Costa Rican president Carlos Alvarado Quesada’s campaign promises was the legalization of same-sex marriage, and his predecessor Luis Guillermo Solis presented the decisive case to the CIDH in May 2016, asking for an advisory opinion. Although coronavirus concerns prohibited large-scale celebrations, national television broadcasted performances and the country’s first same-sex wedding overnight. Within two days, over sixty homosexual couples filed for marriage licenses.

Rulings of the Inter-American Court on Human Rights apply to the twenty five countries that have ratified the 1969 American Convention on Human Rights; however, the countries must change their own legislation, as the court does not have the power to revise them on its own. When passing its judgment on same-sex marriage, the CIDH acknowledged the potential resistance to their decision given the Catholic influence within Latin America, but said, “in democratic societies, there should exist mutually peaceful coexistence between the secular and the religious.” As Costa Rica becomes the first in Central America to take this step toward equality, it remains to be seen who will be next to turn the Court’s opinion into action.

Here is a brief look at where Latin American countries stand on the issue of same-sex marriage:

Where same-sex couples can marry:

Argentina became the first Latin American country to legalize same-sex marriage in 2010, when the Senate passed legislation after fourteen months of deliberation—and a fourteen-hour session. Homosexual couples have adoption rights, and transgender citizens can change their identification information. Over 20,000 same-sex couples have wed in the decade since legalization.

Colombia began to take gradual steps towards marriage and parental equality in the 1980s, including protection from discrimination and adoption rights. In 2016, the country’s Constitutional Court took the final step towards marriage equality and legalized same-sex marriage.

Ecuador’s Constitutional Court legalized same-sex marriage in July 2019. The ruling prohibited discrimination based on sexual orientation, declared limitations on marriage to be unconstitutional, and ordered the National Assembly to pass legislation broadening the definition of marriage.

Mexico’s Supreme Court declared bans on same-sex marriage to be unconstitutional in 2015. Although twelve states still have not officially legalized same-sex marriage, couples in those states can appeal in a federal court for approval of their marriage licenses.

Uruguay legalized same-sex marriage in 2013, making it the second country in Latin America to do so. Homosexual couples are granted all the same legal rights as heterosexual couples, and the country continues to take steps to improve sexual education and prevent discrimination.

Where same-sex couples cannot marry, but legislation or rulings are pending:

Bolivia legalized transgender marriages in 2017 for those who have legally changed their sex, but not same-sex marriages, preferring to “protect marriage between a man and a woman.” Additional legislation has been proposed but deliberations are ongoing.

El Salvador restricts marriage to unions between a man and a woman. However, the Supreme Court of Justice is still deliberating a marriage equality case that was presented in 2016, and justices announced that they are in the final stages of the debate and hope to vote in 2020.

Honduras currently prohibits same-sex marriage, but in 2019 the Supreme Court agreed to hear a case calling this ban unconstitutional. With the legalization in Costa Rica, Hondurans are again discussing making changes to their laws.

Panama has pending cases on marriage equality within its Supreme Court docket, but the National Assembly attempted to limit marriage to a union between a man and a woman in the midst of constitutional reforms at the end of 2019. This was met with protests, leading President Laurentino Cortizo to promise he would attempt to remove that restriction before the referendum on these reforms.

Where same-sex couples cannot marry, and prohibitive bans are pending:

Haiti’s Senate approved a bill to ban same-sex marriage and ban public support for the LGBTQ community in 2017. Both bills are under debate in the Chamber of Deputies but are expected to pass, given that a nationwide poll found 90 percent of Haitians were against equal rights for LGBTQ citizens.

Guatemala delegates marriage equality laws to the states, but the federal government debated the topic during 2019 when some legislators revived an initiative (Law 5257) that would, among other things, permanently prohibit same-sex marriage in the country. The bill has not yet passed.

Where same-sex marriage is forbidden:

Cuba has not ratified the American Convention on Human Rights, but marriage equality will be included as topic of debate during the 2021 nationwide referendum on the country’s Familial Code.

The Dominican Republic continues to defend its constitutional article restricting marriage as a union between a man and a woman, and the debate remains tense as evangelical organizations and gay rights organizations compete to sway public opinion.

Nicaragua does not allow same-sex marriage, and homosexual citizens often experience discrimination and violence for their sexual orientation. They have also been labeled as anti-government conspirers by the country’s president and vice president.

Paraguay constitutionally restricts a family to a group that includes a union between a man and a woman. Additionally, homosexual couples can experience discrimination for public displays of affection.

Peru’s constitution does not include a restriction against same-sex marriages, but the Civil Codes do. However, homosexual couples married in other countries have successfully appealed for recognition of their marriage in Peru, sparking a debate about the country’s legislation.

Venezuela denounced the American Convention on Human Rights in 2012, thus it is not bound to the CIDH’s ruling on same-sex marriages. However, citizens have continued to protest despite the crisis within the country, and hope remains that the laws will be changed.

Caribbean countries that have ratified the American Convention on Human Rights, Barbados, Dominica, and Jamaica, all criminalize homosexuality.

Grenada and Suriname, English-speaking countries in South America, have both ratified the American Convention on Human Rights, but while Grenada criminalizes homosexuality, Suriname criminalizes discrimination, with special restrictions on discrimination based on sexual orientation. However, neither country recognizes same-sex marriage.

Isabel Kennon is a former intern with the Adrienne Arsht Latin America Center.

Significant lags in women’s economic and political empowerment remain in countries like Colombia. Having closed educational attainment and health and survival gaps almost entirely, the country still faces important gender gaps in economic participation and opportunity (a gap of 26.5 percent) and in political empowerment (a gap of 68.2 percent). If Colombia doubles-down on its efforts to close these gaps, numerous economic and social benefits will follow.