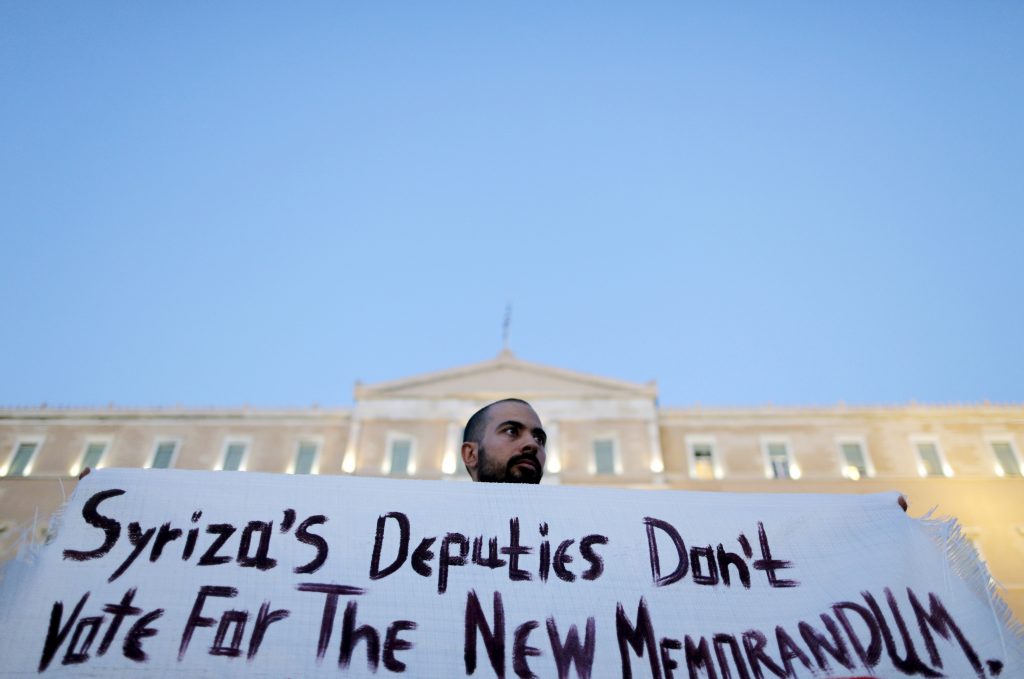 The terms of an agreement between Greece and its Eurozone creditors are tough, but there is an implicit recognition that austerity alone is not the answer, says the Atlantic Council’s Fran Burwell.

“There needs to be solidarity within the Eurozone and one has to keep working to keep all Eurozone members in,” said Burwell, Vice President and Director of Transatlantic Relations at the Atlantic Council.

Greece agreed July 13 to pass legislation on controversial economic reforms by July 15 as a precondition for the start of negotiations on securing a third bailout that could be worth up to €86 billion.

The breakthrough came after tough negotiations in which countries such as Germany and Finland took a hard line against Greece. Burwell said domestic considerations played a significant role in shaping the positions of many of these countries.

“I fully expect that in the election campaign coming up in Spain the two major parties will make an argument that is along the lines of ‘Look what Syriza did to the Greek economy and the decline that we have seen since January through July. Do you want to be there? Then vote for Podemos,’” said Burwell.

Fran Burwell spoke in an interview with the New Atlanticist’s Ashish Kumar Sen. Here are excerpts of that interview:

Q: Is it premature to say a Grexit has been avoided?

Burwell: It is a bit premature to say that a Grexit has been avoided, but we are now headed down another path. If everything goes as outlined, a Grexit can been avoided. But there are so many jumps that must be cleared in this path that we might still veer back to the other path of the Grexit, which looked very possible immediately after the referendum.

The first hurdle is that the Greek Parliament on Wednesday must sign up to some very onerous measures, and do so much more quickly than we have any right to expect a Parliament to do. Then we have to get through the Eurozone Parliaments, particularly Germany and Finland. I think that will work, but it will depend first on the Greeks doing what is necessary.

Q: Some critics have called the creditors’ terms harsher than the Treaty of Versailles. Have the creditors been too harsh?

Burwell: It is harsh. It is harsher than the deal that Greece was offered right before the referendum. The calling of the referendum and the fact that Prime Minister Alexis Tsipras did not tell the other Eurozone leaders that he was going to call a referendum has really led to an evaporation of trust between the Eurozone governments and the Greek government.

The document is written in such a way that you can tell that they are concerned that the reforms they are looking for will not happen and that things will continue as they have in the past in Greece. For example, there is a requirement that Greece reform its judicial system, which is quite striking. This is a financial agreement after all, but it clearly has to do with the corruption and the cronyism that happens in Greece and that has been a problem in implementing earlier agreements.

Q: In what ways is the plan Tsipras has accepted different from what his government initially rejected?

Burwell: It is tougher. The monitoring by the Eurozone group and the institutions that used to be called the troika is as tough as anything that we’ve seen from the troika.

The one difference I would say is that the agreement two weeks ago was about releasing a last payment on the second bailout. This one is about starting negotiations on a third bailout. We’ve jumped to the next program, but it requires tougher conditions than Greece would have seen in the earlier agreement, although there is also a much larger pot of money on offer, assuming a final agreement can be reached.

Q: After winning a referendum in which Greek voters rejected more austerity, Tsipras went ahead and accepted more austerity. What implication is this likely to have on his government, and his credibility among the Greek people?

Burwell: It is now unclear whether Tsipras’ coalition will hold together and support the agreement in Parliament, or whether he will have to rely on some of the more pro-EU opposition parties. Even his own party, Syriza, is likely to be divided in its support for this new accord. So the possibility of the government falling does exist, or that there will have to be some realignment.

The larger question, however, has to do with the ability of the Greek people to support Tsipras after he led them in a campaign to reject the earlier deal with the Eurozone.  With his encouragement, they voted ten days ago against a milder arrangement with the Eurozone. The question is whether his victory in that has given him enough credibility so that he can now convince his people to follow him into a new era of austerity.  Or will his government be seen as violating its pledges? Will we be closer to new elections, and who will the citizens of Greece then support?

The agreement will weaken Tsipras, but all the other parties are in such a weak place. One could be talking about having a snap election, but right now it’s not clear anything would happen other that we would end up back in the same spot. It may be that the Greek public will say, “He may have come back with this agreement that is really tough, but we think he is still our best representative.”

Q: In this process you had the French and the Italians being more sympathetic toward Greece versus the Germans who pushed for tougher measures. What impact is this likely to have on the European project?

Burwell: The French in particular deserve credit for getting us to where we are today. It appears that they helped the Greeks polish the proposal that became the basis for negotiation, something the Greeks had been unable to present on their own before. The French and the Germans were among the main negotiators during the Euro group meetings over the weekend.

I think what it says is that even though this agreement is very tough, there is still a recognition that it cannot all be about austerity. There needs to be solidarity within the Eurozone, and that one has to keep working to keep all Eurozone members in. That is the basis of the French argument.

There were undoubtedly those from the north, and some in Germany—I don’t think this about [German] Chancellor [Angela] Merkel, but I think this about some others in the German government—who seemed to think that the Eurozone would be stronger without Greece. There is an argument in that direction, but it is a very economic argument and not about the future of Europe.

Q: To what extent were domestic constraints a factor in shaping the positions taken by countries such as Germany and Finland?

Burwell: It was huge. Look at the Spanish and the Portuguese. The Spanish support what Merkel has been doing and they support being really tough because they have a Syriza like party [Podemos] and what they want to show is that Syriza is on the wrong track.

I fully expect that in the election campaign coming up in Spain the two major parties will make an argument that is along the lines of “Look what Syriza did to the Greek economy and the decline that we have seen since January through July. Do you want to be there? Then vote for Podemos.”

Image: An anti-EU protester holds a banner in front of the Parliament building during a demonstration in Athens, Greece, July 13. Eurozone leaders made Greece surrender much of its sovereignty to outside supervision July 13 in return for agreeing to talks on a third bailout that could be worth up to €86 billion to keep the near-bankrupt country in the single currency. (Reuters/Christian Hartmann)