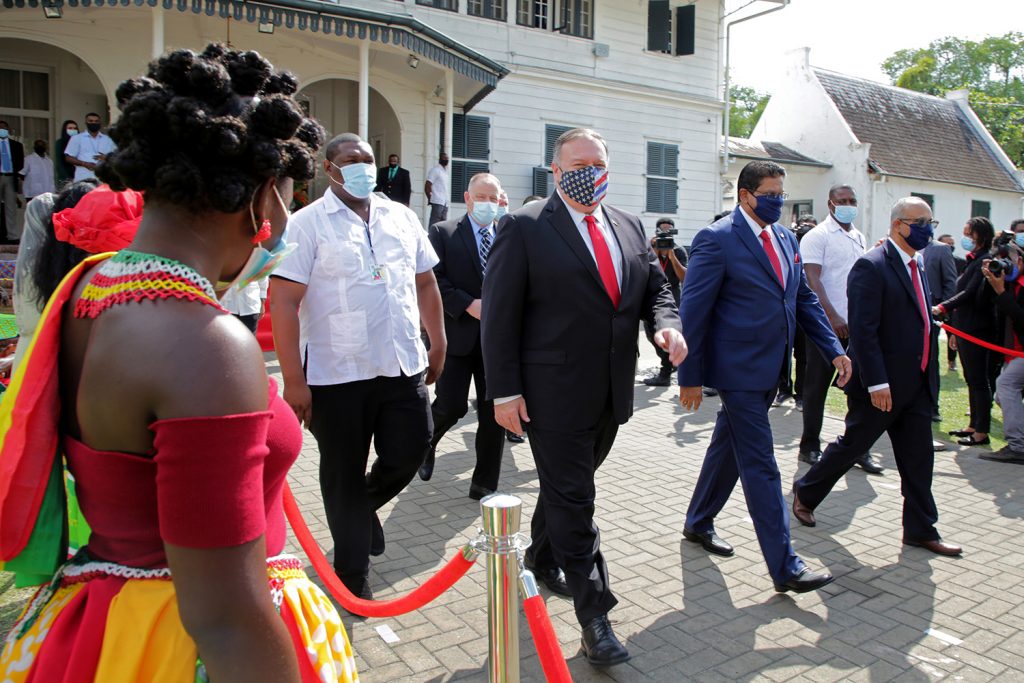 In a whirlwind trip, Adam Boehler, chief executive officer of the US International Development Finance Corporation (DFC), met with the presidents of Suriname and the Dominican Republic and the prime minister of Jamaica to discuss private sector-led investment in infrastructure, energy, technology, and women’s economic empowerment from October 13-15. The DFC delegation also met with national private-sector organizations in Haiti and Guyana. The trip demonstrated the United States’ growing economic and commercial interest in the Caribbean region—going beyond Washington’s traditional emphasis on security and diplomatic issues.

The DFC—created by the BUILD Act of 2018—has carefully articulated a “Roadmap for Impact,” a five-year strategy which aims to accelerate partnerships across the public and private sectors for financing development projects worldwide from 2020-2025. This whole-of-government strategy is a welcome sign for the Caribbean region, particularly since an integration of the United States’ foreign policies on aid, trade, security, and investment in one coordinating agency will encourage regional alignment on shared development goals.

Indeed, while US Secretary of State Mike Pompeo’s January visit to Jamaica focused mainly on the Venezuelan crisis—which has often put Caribbean partners in the difficult position of trying to maintain neutrality—his more recent September visit that included Guyana and Suriname signaled a willingness to open up a broader conversation about energy, the post-COVID-19 economy, and strengthening regional relations. Suriname’s foreign minister, Albert Ramdin, described the secretary’s visit as a “highlight,” noting that it was the first instance of such a high- level visit from a US official for Suriname.

Building on the momentum of Pompeo’s visit, the DFC visited Guyana, Suriname, Jamaica, and the Dominican Republic barely a month later to discuss investment opportunities. The DFC’s current portfolio in the Caribbean includes more than $489 million invested across projects ranging from small-business lending, power generation, agriculture, and low-income mortgage lending.

“BUILD” is a quite clever acronym that stands for “Better Utilization of Investments Leading to Development.” The ingenuity of DFC’s “Roadmap” resides in its new authority to make equity investments and its “IQ” impact quotient metric measurement tool. DFC, like its predecessor the Overseas Private Investment Corporation (OPIC), can provide political risk insurance and technical assistance to eligible countries, but also has a wider mandate to corral and organize the private sector, international finance institutions, and development finance institutions to structure innovative blended financing that will take into account the very specific needs of the Caribbean region for social investments in health and education and the more novel financing needs for biodiversity and environmental preservation and protection—biofin.

Perhaps more importantly, a July 7 Memorandum to Secretary Pompeo from the White House requires that he “certify to the appropriate congressional committees that the provision of support under title II of the [BUILD] Act in a less developed country with an upper-middle-income economy furthers the national economic or foreign policy interests of the United States.”

Although the impetus for this memorandum is not clear, several of the small Caribbean islands have gross domestic product (GDP) per capita incomes over $16,000, which excludes them from US Agency for International Development (USAID) and other concessional financing/funding for necessary social programs for poverty alleviation. Caribbean nations have been trying to explain to the US government the disadvantages of the GDP per capita metric: it masks high indebtedness, stark income inequalities, and the vulnerability of economies based on one commodity or service.

That the White House created an exception to include “upper middle-income economies” may be a harbinger of a more profound understanding of the Caribbean’s challenges. Were the United States to lead the Atlantic community in a new pragmatic classification of these countries, such leadership would not only reap significant good will, but also accomplish DFC’s stated goals of targeting fragile states and empowering women by unmasking the real poverty in countries with high income inequalities. We will have to wait and see.

Additionally, the greater focus on economic and commercial cooperation can also help achieve diplomatic goals. The recent DFC visit came amid increasing diplomatic cooperation between Guyana and Suriname, as they hammer out the Strategic Dialogue and Cooperation Platform (SDCP), set to be launched in November. The platform includes discussion of topics such as the Guyana-Suriname Ferry, the bridge over the Corentyne River, and tackling illicit flows of goods. While there may not a direct causal line, the US government interest in this dialogue, coupled with that of the US private sector, has an intangible beneficial effect in accelerating a framework for optimizing the relations between these two neighbors.

As the Adrienne Arsht Latin America Center begins its Caribbean Initiative, DFC has already positioned itself as an indispensable partner for sharing and testing ideas. Jim O’Neill, former Chair of Goldman Sachs Asset Management and former UK Treasury Minister writing in Project Syndicate reminds us: “It might be cathartic to opine noisily about another country’s standards and practices, but there is substantial historical evidence to suggest that a country’s citizens will tend to value economic opportunity over most other issues.”

Optimizing economic opportunity in our hemisphere remains the best bulwark against insecurity, illicit activities, and violence. The United States’ renewed interest in promoting commercial investment and opportunities are positive signs that real progress can be made in this vital region.

While the new constitution could help jumpstart efforts to alleviate many of the inequalities in Chilean society, the struggle to get to this point should give caution to other countries that have left structural inequalities unaddressed.